David Yarnold of the Audubon Society recently wrote on The Huffington Post and elsewhere about wind power and bald eagles. Only a handful of bald eagles have collided with commercial wind turbines in the history of the industry. Moreover, the Fish and Wildlife Service rule he opposes applies to many other industries and activities beyond wind.

If he truly believes his recent statement that "climate change is the single greatest threat to both birds and people," Mr. Yarnold would not single out a technology that brings great net positive benefits for wildlife, and would work with regulators on practical solutions. 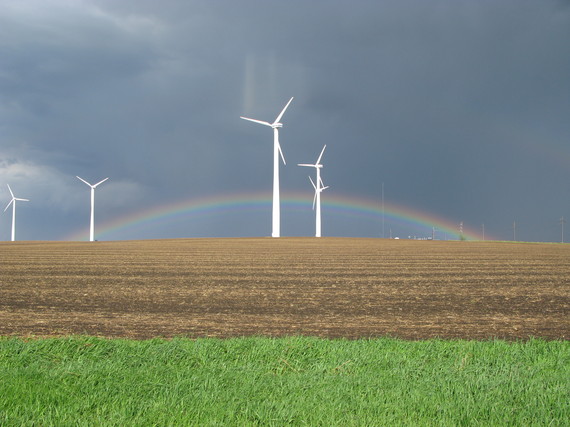 
This long-awaited program will provide more eagle conservation than currently exists today, which leaves many in the wind industry and others who share our concern for saving eagles scratching our heads over his hyperbolic response.

As stated by the preamble to the rule and the Department of Justice, "Permits may be available to companies in all types of industries," such as oil and gas development, electric utilities, or transportation, which take eagles in the course of otherwise lawful activities, but these industries can work with the Service to develop and implement additional, exceptionally comprehensive measures to reduce risk to eagles to the level where it is essentially unavoidable.

Extending the permits will allow permit-holders, including wind farm operators, to provide conservation benefits for eagles while granting them a degree of legal and financial certainty critical to any business.

And this program is expressly designed to protect eagle populations by providing much-needed conservation benefits in exchange for very limited "take" authorization, after all steps have been taken to first avoid and minimize risk to eagles, and then fully offsetting that risk so the net effect on eagles is neutral or positive.

This concept is not new. Congress authorized the permitting of the non-purposeful take of eagles that was incidental to otherwise lawful activities decades ago under the Bald and Golden Eagle Protection Act. The current permit program was initiated under President George W. Bush and the rule finalized in 2009. The most recent change to the rule, extending the permit duration, makes it more consistent with the Endangered Species Act's permit program, widely considered to be the gold standard for wildlife protection, which already provides for life-of-activity authorization -- in some instances lasting 40-60 years -- for species that by their very definition are more imperiled than eagles. Those permits have allowed economic development while protecting wildlife.

With all of the above in mind, while eagles do unfortunately collide with turbines at some wind farms, it is not a common occurrence. Based on a review of all publicly available data, fatalities at modern wind facilities represent at most 2 percent of all documented sources of human-caused fatalities of golden eagles, and as noted, only a handful of bald eagles in over 30 years.

Yet the wind industry is committed to, and strives for, further reducing these impacts and does more to address risks to eagles than any of the other, far greater human sources of eagle fatalities that exist in the landscape today. For example, the Exxon Valdez oil spill immediately killed 247 bald eagles.

To obtain a permit, wind farm developers and operators need to engage in years of pre- and post-construction monitoring for wildlife impacts. They then make changes to the project design at the request of the U.S. Fish and Wildlife Service, accept lost revenue from changes to facility layout and operations, and provide upfront mitigation for losses that may or may not occur (based on a highly conservative model that presently overestimates the risk). Through the permit mitigation permittees will help reduce the present impacts of other threats. And there are no guarantees that more will not be required of permit holders in the future, regardless of what is negotiated during the permit process. All this poses a business risk.

The administrative change allowing for permits of up to 30 years, with check-ins required at least every five years, will encourage these much-needed, long-term eagle conservation efforts, while allowing wind companies to increase the affordable and renewable energy they supply to American consumers. These permits will be difficult to qualify for and keep -- the result of much hard work with Audubon and other wildlife conservation groups to make sure they will work to the eagles' benefit -- no matter what Mr. Yarnold likes to claim.

Wind energy already reduces U.S. carbon dioxide pollution by nearly 100 million tons a year, and it's one of the most affordable and readily scalable ways to address climate change -- the single greatest threat to eagles and wildlife, say leading wildlife experts.

While reasonable people can disagree over what to do first, the latest revisions to the permit program are a major step forward for eagle protection and should be allowed to proceed without unreasonable attacks.