On a good day, gaggles of kitesurfers gather along the seaside in the Belmont Shore neighborhood of Long Beach, California; a place known to Angelenos as a mecca for kiteboarding and kitesurfing. Here, half-moon shapes of bright red, blue, and orange kites dot sand and sea, as a strong breeze whips minuscule particles of weathered shells into the air. This is hell on earth for a sunbather, but an absolute slice of heaven for a wind-loving kite junkie.

One such kite junkie, Edward Huckle, comes to Belmont Shore not only to practice his sport, but to test the accuracy of his wind predictions. Wind is among the most necessary elements of kitesurfing -- but it's one of the most difficult to predict with any precision. Although existing forecasting applications do a decent job of estimating at what speed and direction the wind will blow, Huckle -- who is a data scientist as well as an avid kitesurfer -- believes he can build a predictive model that outdoes these platforms when it comes to a specific location like Belmont Shore. 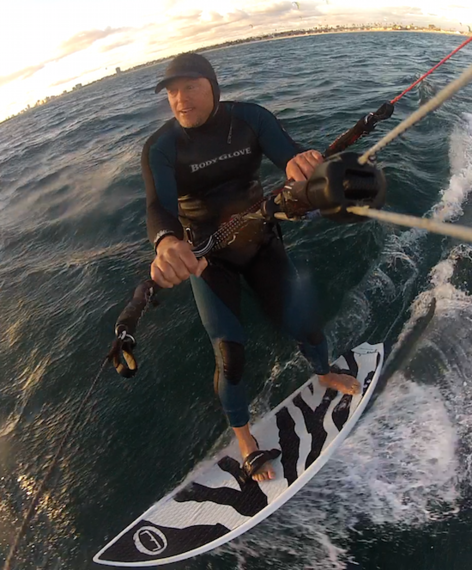 Early in the season, summer afternoons in Belmont Shore boast a steady side-onshore wind, with typical gusts ranging between 15 and 20 knots. But sometimes, the wind simply isn't blowing as expected -- which is why any seasoned kiter knows to bring multiple rigs, kites, lines, or boards to account for possible changes.

With the advancements in technology and science, why do gross inaccuracies exist in regards to reading wind-weather for a particular area? Unreliable wind information is due to the fact that weather services use atmospheric computer models to solve equations on a theoretical "grid" that has large gaps between points of measurement, according to Huckle, who works at DataScience, Inc. in Culver City, California. "It's too coarse to account for wind accelerating around cliffs or being shadowed by a small island," he confirms.

"I am trying to show if it is possible to forecast small scale phenomena -- especially the wind at Belmont Shore -- by using information from these weather service models, plus various other non-local information, as well as historical correlations between certain weather patterns and the quality of the kitesurfing on those days."

Huckle's work on his "Kitesurfability" data model started with an analysis of historical weather data over the past three years to identify what constitutes a "good" kitesurfing day, including factors like wind speed, gust, and wind direction. He then developed a mathematical formula to rate those days. 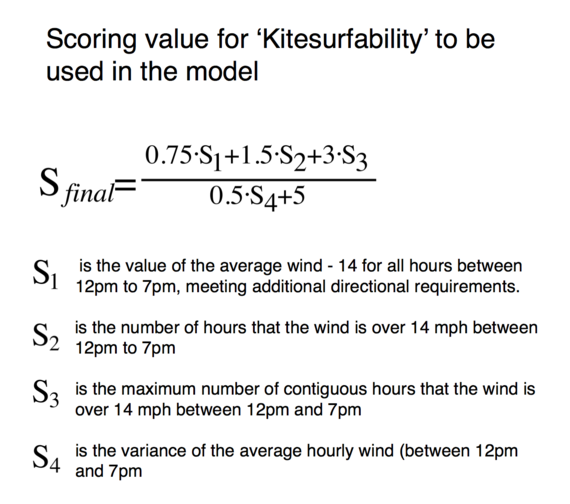 Next, he collected temperature and pressure data from Long Beach and nearby areas like Ontario, Fullerton, Riverside, Barstow, and Palm Springs that may have influenced the conditions at Long Beach. He plans to apply an algorithm to this data to see if it can identify the days he's already labeled as optimal kite surfing days. Once he's landed on the right algorithm, he'll focus it on predicting the future: Temperature and pressure are easy to predict a day or two in advance, so the algorithm could use those features to determine whether it would be a good kitesurfing day one or two days ahead of time. 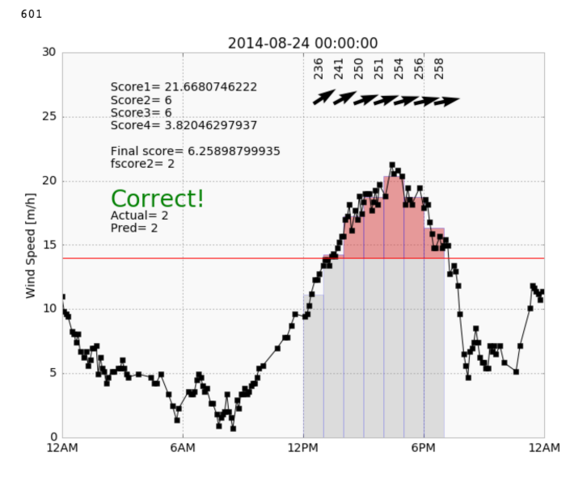 The black dots in this chart show actual measured wind speed for August 24, 2014. Because most kitesurfers need approximately 14 mile per hour winds, the red shaded portion of the chart is used to calculate a final "kitesurfability" score for that day (on a scale of 0-2). In this case, Edward Huckle's kitesurfability model was able to correctly predict how good the day would be for kitesurfing, without knowing the measured wind speed from that day in advance.

Data scientists -- like Huckle and his colleagues at DataScience -- have been trained to look for novel solutions to complex problems. Using data and deep analytics, they assist businesses, governments, and individuals in their daily operations and lives; whether that be through charting the safest routes for cyclists on the busy streets of Los Angeles or by developing models that will increase the level of enjoyment for extreme sports lovers.

One would not expect kitesurfing and data science to be so closely linked, but the relationship becomes apparent when you talk to Huckle. "I have been deeply involved in various outdoor sports for years, from attempting to get a spot on the U.S. ski team, to climbing El Capitan, to mountain biking, sailboat racing, scuba diving, paragliding, and much more," he says. Huckle's interests have been reflected in his work: Before he was a data scientist, he built computer models to simulate the physics of the ocean as an oceanographer.

"Since I discovered kitesurfing,I have been completely addicted," Huckle adds. "This sport offers more thrill, skill, independence and simplicity than the other sports do. It's like being able to perpetually ride a race car or roller coaster that is completely under your control; with no limits on speed, thrill, or creativity."

For any kitesurfer, the wind -- or lack-thereof -- is an all-important, day-altering phenomenon. From the moment one begins to love the sport, he or she will understand how watching, hoping, praying, and obsessively checking for a windy day becomes a complete preoccupation. But for a data scientist, obsessing about the wind can easily evolve into wind predicting--and maybe, someday, Huckle's predictions could power a tool for the whole kitesurfing community.