WASHINGTON -- For the American wind power industry, it’s as if the wind has stopped blowing. A crucial tax credit aimed at spurring renewable energy is set to expire at the end of the year, and Congress has yet to extend it. Major wind power projects are now stalled amid a shortage of finance and uncertainty over the rules going forward -- a state of play threatening to eliminate tens of thousands of jobs.

"We've had multiple wind farm projects we've had to put on the back burner because of the delay," said Mike O'Sullivan, senior vice president of development for NextEra Energy Inc., a large utility holding company based in south Florida.

Beneath the high-profile jockeying in Washington over the looming fiscal cliff -- the package of tax increases and spending cuts set to take effect at year’s end absent an agreement for something more palatable -- a quieter fight continues over subsidies the government provides to encourage renewable energy.

The so-called production tax credit has made wind and solar installations more financially appealing for investors, encouraging new projects. But with each passing day absent movement in Congress toward renewing the credit, investors grow more skittish about pouring money into wind and solar installations, fearful that they will not be able to secure a return on their capital, as the tax credits have traditionally reduced the cost of new projects by one-third.

O'Sullivan declined to specify which of NextEra’s projects are on ice, but the evidence of a job-killing slowdown has been emerging in multiple states. Everpower Renewables, a wind developer in Ohio, scrapped a $20 million project employing 200 construction workers; Siemens Wind Power, a major turbine manufacturer, laid-off more than 900 employees; and Katana Summit, a wind tower maker, has announced plans to shut down plants in Nebraska and Washington.

If the tax credit is allowed to expire, some 37,000 jobs could be eliminated, according to a study by Navigant Consulting.

"When you're manufacturing, you don't just fire up a machine and produce something off the lines," said Liz Salerno, chief economist for the American Wind Energy Association. "You need a constant flow of orders to keep that facility up and operating, to keep people employed."

The wind industry -- which currently supports an estimated 75,000 jobs, many of them in Midwestern states that typically vote Republican -- has long endured sporadic lapses of the federal credit, spurring boom-and-bust cycles within the industry, but in recent years federal subsidies have been extended with enough lead time for investors to plan ahead. 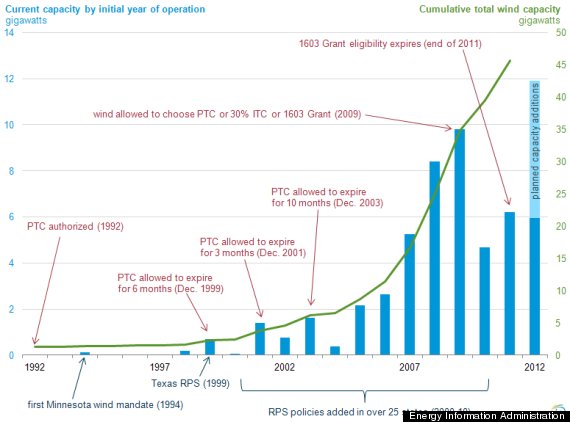 A chart provided by the U.S. Energy Information Administration details ups and downs of the industry since the PTC was first enacted in 1992.

A proposal for a one-year extension of the tax credit has already passed in the Senate. The House will vote on a version of the measure, most likely as part of fiscal cliff negotiations, next month.

"We've had enough of a window of certainty or stability where we now have a vast manufacturing sector in this country that has been built over the past five or seven years," Salerno said. "Now we've made a huge investment. We've scaled up manufacturing and achieved cost reductions and efficiencies and all the things that happen with a scale up, but because of the uncertainty, these folks who made the investment are unfortunately faced with having to make really hard decisions about shutting down and laying people off."