In the continuing struggle to reduce the greenhouse gas emissions that are slowly roasting our planet, one of the few bright spots over the years has been the explosive growth of the wind power industry.

The primary driver for this rapid growth is the financial incentive provided by the federal government's Production Tax Credit (PTC), which gives producers of wind energy $23 for every megawatt hour of electricity generated. Started in 1992, the PTC has been the great equalizer for wind in an industry dominated by coal and gas.

The problem with the PTC, though, is that it was never intended to be a permanent subsidy, and whenever it expires, new wind installations drop off precipitously. The chart below illustrates how closely the fortunes of wind are tied to the PTC. The first time the PTC expired in 1999, installations fell 92 percent. Subsequent expirations of the PTC at the end of 2001 and 2003 were followed by installation drop-offs of 76 percent. 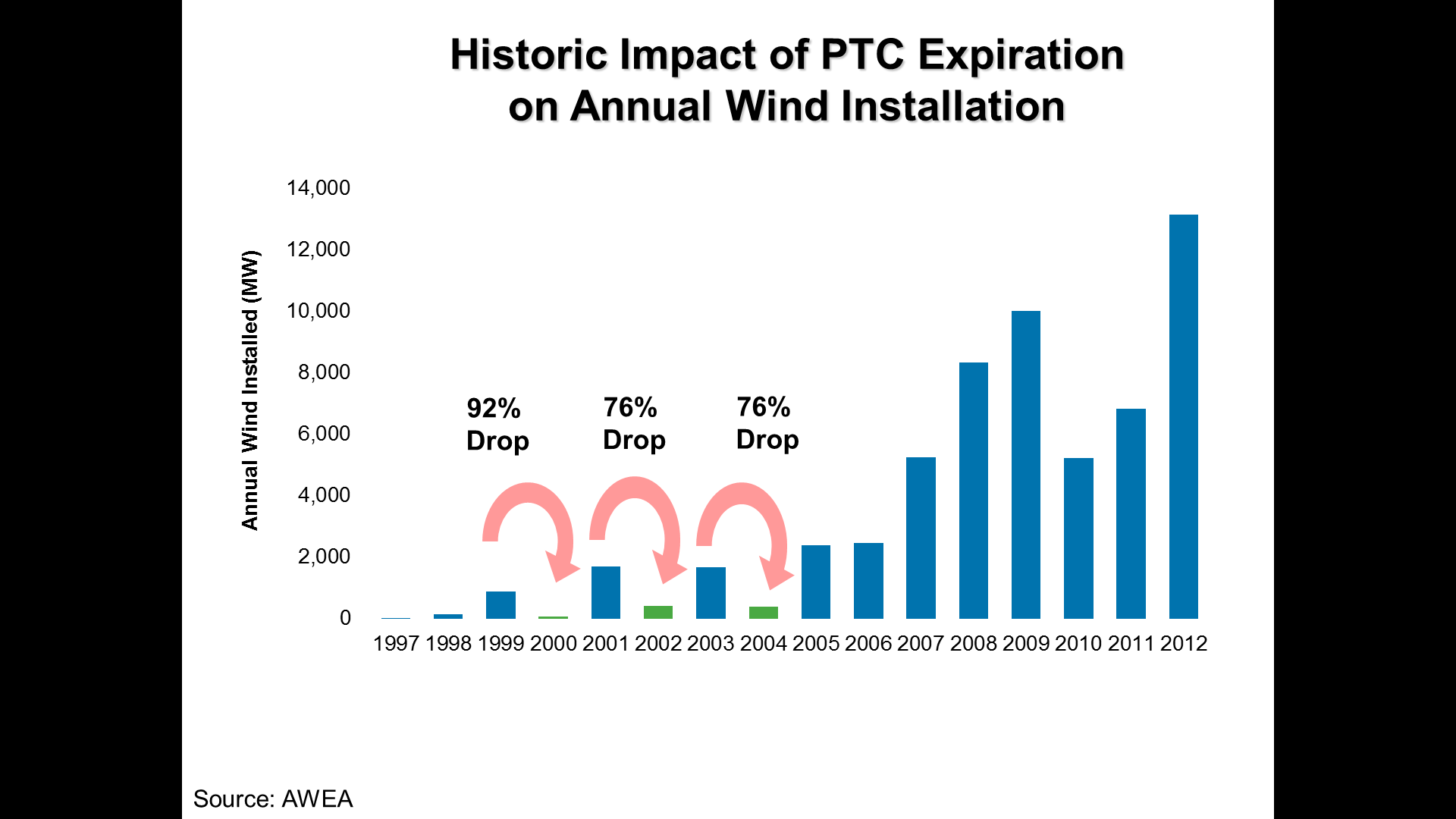 Another such drop-off was feared last year when the PTC was due to expire at the end of 2012, and as the wind industry has grown, so have the stakes tied to the PTC. Industry advocates were warning last year that allowing the PTC to expire at the end of 2012 would cost the nation roughly 40,000 jobs. In a frenzied scramble that left industry lobbyists -- pardon me -- winded, the PTC was extended for one more year. That last-minute miracle came about through an amendment that was slipped into a must-pass bill last year that avoided the "fiscal cliff" of increased income taxes for most Americans.

The uncertainty of extending the PTC has slowed growth for this year, but is expected to pick up in 2014, as tax credits will be awarded to projects completed by 2015 as long as they were started in 2013. This boom-and-bust cycle, driven by the on again/off again PTC, wreaks havoc on the lives of people employed in the manufacturing and installation of wind turbines who may not know if they'll have jobs from one year to the next.

And now the wind industry is once again fretting the economic fallout of life without the PTC, as the prospects for another extension appear slimmer than they were last year. At a hearing last week of the House Oversight and Government Reform subcommittee on Energy Policy, it became clear that political support for the PTC, even among Republicans in states with wind industry jobs, is fast blowing away. Here's what Chairman James Lankford (R-OK) had to say:

"We keep hearing that 'we're almost there' or 'just a little bit longer.' But the facts state that wind power has been steadily increasing over the last 10 years, and there's this point of saying, when does wind take off on its own?"

Although wind is now price-competitive with coal for producing electricity -- and catching up to natural gas -- investors have grown accustomed to the additional edge of the PTC that guarantees a return on investment.

So, if the PTC goes away, how does wind retain the edge that's allowed it to lead all sources for new generation of electricity?

The answer: A revenue-neutral carbon tax. A steadily-rising tax on the carbon content of fossil fuels will give wind and other forms of clean energy a competitive advantage and keep investors from stampeding out the door.

It's a solution that's gaining support from conservatives who want to offer a market-based alternative to new regulations in the works to cut carbon at power plants. Coal, oil and gas currently have a competitive advantage because the costs of the damage they do (to our health and climate) is borne by the public. By taking these hidden costs into account in the price, through a carbon tax, we can correct the distortion in the marketplace that gives fossil fuels an unfair advantage. The marketplace then becomes the driver of clean-energy development with less need for subsidies like tax credits. A well-designed carbon tax, with revenue returned to the public, can speed the transition to clean energy without damaging our economy.

Over the years, the wind industry has cultivated powerful allies among Republicans in wind-rich states to successfully champion the PTC. As the sun sets for the PTC, it's time for wind advocates to talk to those allies about supporting a revenue-neutral carbon tax.