They might be the landlords from hell, but you're not allowed to complain about them.

A Florida apartment complex is under fire after management forced new tenants to sign a "social media addendum" that threatened a fine of $10,000 if they gave the place a bad review online, Ars Technica reports. The addendum, which went viral Tuesday after the Windermere Cay complex in Winter Garden started handing it out, also forces tenants to sign away their rights to any photos, reviews or other material about the complex posted online:

“Applicant will refrain from directly or indirectly publishing or airing negative commentary regarding the Unit, Owner, property or the apartments,” the addendum reads. “This means that Applicant shall not post negative commentary or reviews on Yelp!, Apartment Ratings, Facebook, or any other website or Internet-based publication or blog."

On Yelp, reviews have been flooding in from people who are either disgusted by the contract or think the whole thing is a joke. Most of them said they weren't tenants. One of Windermere's five-star reviews, for instance, comes from "Adolf H." who hailed the complex for having "my kind of management."

Other reviews on that site and ApartmentRatings.com were similar: 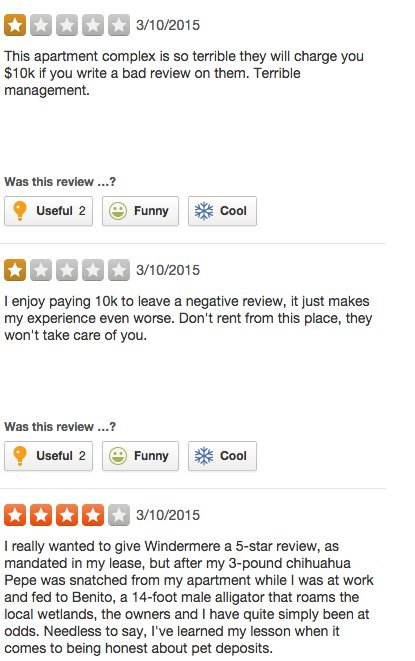 Ars Technica spoke to one resident of the five-building complex, who wished to remain anonymous. He called the addendum "ridiculous" and said he asked management to remove it from his lease, but didn't receive a response.

"If I took a photo of people in my apartment, they would own it," the tenant said.

"This addendum was put in place by a previous general partner for the community following a series of false reviews. The current general partner and property management do not support the continued use of this addendum and have voided it for all residents."

Regardless, law experts have told multiple publications that the addendum wouldn't hold up in court. Even so, it seems that trying to control tenants' thoughts on your business is a lot harder than trying to make them happy in the first place.