I was always taught that if you don't know how something works, you shouldn't mess with it. The Earth's climate represents a wonderfully complex dynamical system that we do not fully understand. Some components are in a delicate balance. As we continue to shift that balance by disrupting our atmosphere's cooling capacity, there is no telling what will happen.

In the engineering world, the burden is always on designers and operators to find the "envelope" within which a system is safe, and to stay within those specifications. When an engineer fails to identify failure modes, or a pilot ignores the limits of operation, the result can be catastrophic. Lack of complete understanding of a complex dynamical system is a reason for caution, not complacency. That is especially true when the system is expensive, or if lives depend on it. Take our planet, for example.

The rapid melting of Arctic sea ice might lead to a cascade of unpredictable change as the snow-covered reflective surface is replaced by dark, heat-absorbing water. Changing weather patterns might lead to sudden thawing of permafrost, releasing more heat-trapping methane into the air. Or not. Maybe something will happen that nobody has even thought of yet, like the 2001 accident that destroyed the Super Kamiokande neutrino detector in Japan. Like the engineers that were responsible for that facility, we just don't know.

There are many examples of cascading failures in aviation and engineering. The Super-Kamiokande accident is noteworthy because it involved an emergent phenomenon based on very simple physics, but was not anticipated by some of the most brilliant physicists in the world. This Japanese laboratory is the premier neutrino laboratory and consists of over 11,000 photomultiplier tubes in an underground array. According to the accident report, the disaster was triggered by the implosion of a single photomultiplier tube, creating a shock wave that imploded adjacent tubes, setting off a chain reaction (analogous to a chemical or thermal detonation). Post-accident simulations showed that shock wave pulse durations and magnitudes were sufficient, under the circumstances, to sustain the chain reaction.
There is no reason that such simulations could not have been done prior to the accident, and measures taken to prevent it. However, such a scenario was entirely unexpected and may have been considered too "far-fetched" and improbable if it had been suggested. The accident caused over $20 million in damage and it took nearly five years to restore the facility to its pre-accident configuration. 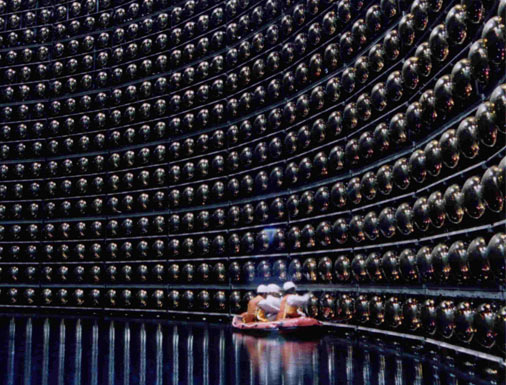 One of the most ominous aspects of global warming is the apparent "plateau" in global mean surface temperature. We know from basic physics and from observations that more energy is entering the earth's atmosphere than is escaping to space. All that heat is being stored. We don't know exactly where, or what effects it will have. It's as if we are winding up a giant spring that us pushing back and giving the appearance of stability that cannot be real. There is some evidence that the gigantic spring is the Pacific Ocean. Eventually, something is going to give, just like it did to a careless flight crew in 1947.

A senior captain, sitting in a jump seat of a DC-4 at cruise altitude over Mt. Riley, New Mexico, engaged the pitch control gust lock without the knowledge of the pilot. Because the aircraft had already been trimmed for straight and level flight, the captain thought that the elevator was stabilized by the balance between the aerodynamic forces of the trim tab and the opposite force of airflow over the control surface itself. In reality, it was rigidly held in place by a pin.

The pilot began to make minor trim adjustments to accommodate a slight drift in pitch angle of the aircraft. This increased the force on the control surface, which was exactly balanced by the lock. It appeared to the pilot that the aircraft was close to the dynamic equilibrium he wanted, needing only small adjustments, when it was actually in a dangerous false balance. By continuing to make adjustments, he was effectively winding up a spring.

When the senior captain released the gust lock, the elevator sprung downward due to the accumulated trim. This abruptly pitched the nose of the aircraft downward, putting it beyond a vertical dive into inverted half-loop. The pilot and senior captain were not wearing seat belts. The sudden acceleration lifted them out of their seats and slammed their heads against three of the propeller feather controls, immediately reducing thrust and preventing a power dive into the ground. The strapped-in copilot managed to roll the plane upright only 400 feet above the desert surface.

In this case, the failure cascade was interrupted by a lucky negative feedback (the inadvertent propeller feathering). A complex system that started in an apparently stable state (straight and level westbound flight at cruise altitude and speed) unexpectedly and abruptly switched to a new state (eastbound fight at 400 feet and red-line speed).

Something that seems stable is not necessarily so, especially if the underlying physics and measurements tell us unambiguously that it's not. And when something as nonlinear and complex as the Earth's climate system goes unstable, all hell can break loose. Just because we can't predict exactly what it will do doesn't mean it won't be catastrophic. Just ask a DC 4 pilot, or a photomultiplier tube array engineer.