For thousands of years wind was the preferred means of moving cargo across the sea; then came steam, and most recently, bunker oil. Despite these innovations, several companies have decided to go back to the future by designing cargo ships that use wind-power along with a conventional or bio-fueled engine for propulsion. Though the Institute applauds these efforts, and hopes they succeed, until they do the enterprise risks being a heroic investment in white elephant technology.

For example, in 1986, Captain D. C. "Sandy" Anderson of Earth-Ship Limited, fitted a modern, 3,500-ton grain carrier named the Carib Alba with his auxiliary wind-propulsion system, COMSAIL (see photo below). On a perfect day, the COMSAIL system generated a fuel savings of up to 35 percent though the yearly average was closer to 15 percent. 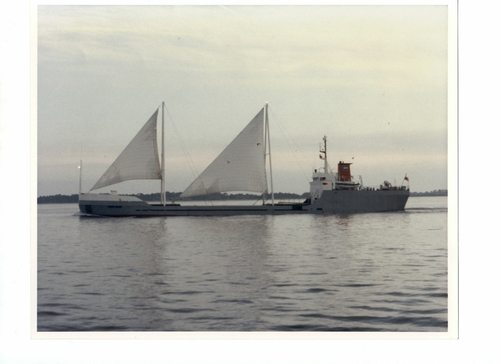 Captain Anderson was way ahead of his time, of course. But after oil prices collapsed the Carib Alba's owner took a blowtorch to Anderson's sailing masts, leaving them on a pier in Houston thus bringing a promising experiment to an abrupt end. Nevertheless, Anderson was first in proving the concept, no small achievement. Importantly, Anderson was undeterred and continues working on wind-propulsion today. To learn more about his non-profit, Earth-Ship Limited, and his experiments with auxiliary wind-propulsion systems, click here.

A quarter of a century later, several organizations including the University of Tokyo and Ireland-based B9 Energy have developed designs for wind-powered cargo ships that both improve fuel efficiency and reduce greenhouse gas emissions (see B9's photo below). Though none of these ships have been built (at least not yet), they are actively seeking funding and may well get off the drawing boards. You can read The SILOE Research Institute's recent report on these wind-powered pioneers in the New York Times by clicking here. 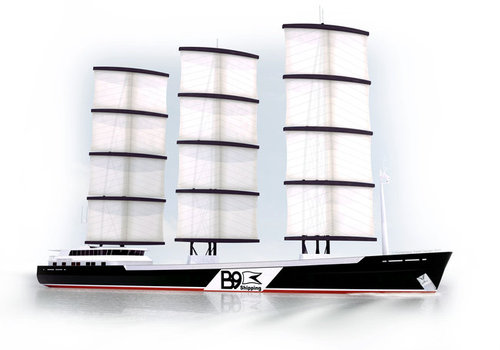 Getting a wind-powered cargo vessel off the drawing board will not be easy. Nevertheless, we feel nothing but admiration for the men and women who are trying. Commercializing innovation is often a challenge. We can only wish them success.