WASHINGTON -- The federal government's refusal to recognize legal same-sex marriages has imposed a "stigma," enshrined a "separate status" into law and "humiliates" a group of people -- and that is unconstitutional, concluded Justice Anthony Kennedy, writing for the majority of Supreme Court justices on Wednesday in their historic decision striking down the 1996 Defense of Marriage Act.

Ten years to the day that the Supreme Court struck down sodomy laws in Lawrence v. Texas, the court, in a historic 5-4 vote, invalidated the federal ban on marriage equality. With DOMA as the law of the land, married gay and lesbian couples were unable to receive more than 1,000 federal benefits that heterosexual couples were able to receive.

Kennedy, along with Justices Stephen Breyer, Ruth Bader Ginsburg, Elena Kagan and Sonia Sotomayor, ruled that DOMA is unconstitutional under the Fifth Amendment. Some of the highlights from his ruling:

DOMA creates a "stigma" on citizens:

Married couples are told they are "less worthy": 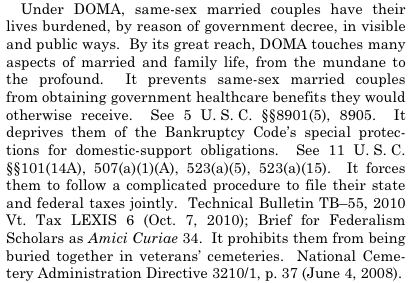