Master of Wine Tim Hanni has been leading the crusade to debunk wine and food pairing myths for years now. Through extensive scientific study, Hanni has found that many traditional food pairings -- like red wine and meat, or white wine and fish -- do not actually enhance the flavor of either food group.

Wine and foods have been paired and matched since the early 20th century, and possibly even before. But as commercial wine culture exploded in the 1980s and 90s,
basic wine and food pairing "rules" were invented and promoted to further the purchase of wine.

Hanni describes many of these rules as "well-intentioned," and rooted in rationale. For example, it is widely espoused that red meat softens the effect of tannic red wine, hence the classic steak-and-cabernet combination. Hanni's studies however, prove that it's actually the salt in the steak rather than the steak itself that softens the bitterness of the tannins.

But not all food and wine combinations are baseless. Hanni believes that it is the way the primary flavors interact together -- sweet, sour, salty, umami and bitter -- that will predict the palatial experience. Additionally, the more exaggerated the attributes of a wine, the more intense that reaction with food will be. 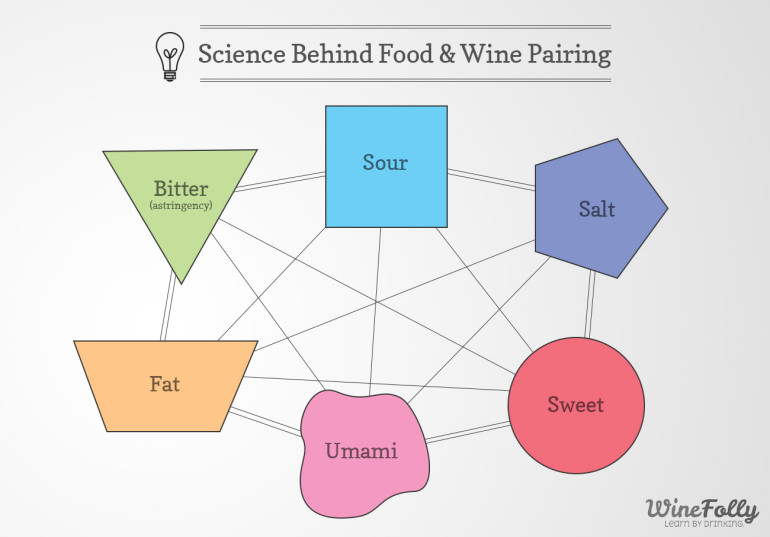 Hanni writes, "in the simplest terms, sweet and umami tastes predominating in a dish will render a wine thin, bitter, sour and unpleasant while salt and acidity in the food will make the accompanying wine richer or smooth, or taken to the extreme, flat and flabby."

For instance, the combination of high acid white wine and oysters will not inherently enhance the flavor of either food, rather the vinegar based mignonette that dresses the oyster that will make a high acid wine taste balanced.

So where does this leave us?

There is some truth to the science of food and wine pairing, but only in how the primary flavors relate to one another. That being said, even without scientific evidence in support, there is still something appealing, and even nostalgic, about pairing food and wine. You wouldn't side a rotisserie chicken with mango or pineapple the way you would a fish taco -- not because it would harm the flavor of the dish, but because the taco is reminiscent of a place warm and tropical, while rotisserie chicken is reminiscent of a meal homey and hearty.

Wine, like food, still represents and recreates a sense of time or place. Like a choice of side dish or table setting, it can set the ambience for the meal.

The bottom line: There are no food and wine pairing rules, only guidelines. And if adhering to wine and food pairing rituals elevates your eating experience, you should continue to do so -- science be damned.