A new company selling wine in a can is counting on millennials to keep their product from falling into the same graveyard as Zima and Miller Clear Beer.

It's called Friends Fun Wine in a Can. The wine is made from "premium French grapes" in southern France, the manufacturer says, but it considers the beverage a "wine drink" or a "wine product" since it has less than half the alcohol content of a normal glass of wine.

Each serving also has half the calories of a regular glass. The wine drink comes in a 8.4-oz. slim can -- the same size as a Red Bull -- that includes two servings, and will be sold for less than $3 per can or less than $6 for a two-pack.

Friends Beverage Group CEO Joe Peleg, originally from Israel and a 1980s graduate of Cornell University, launched the product earlier in 2013. Peleg said in a recent visit to The Huffington Post headquarters that his goal is to make wine more accessible and common for Americans to have with their lunch or dinner.

"We want this to be something light ... something that you enjoy with friends," Peleg said. 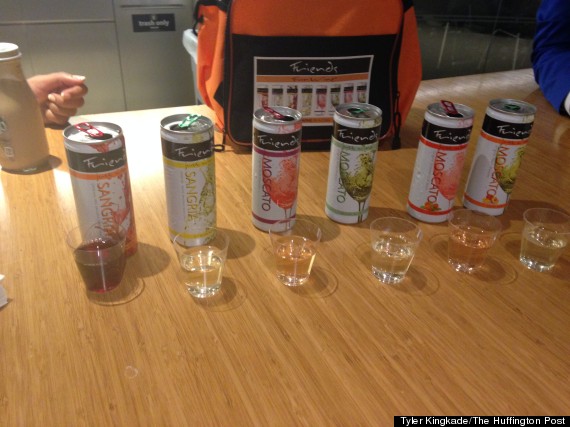 Reactions from HuffPost editors and writers were mixed. Two staffers who cover food said they were not impressed. "It's like adult Capri Sun," one said. Others with less expertise soured on the Peach and Strawberry versions -- one said it was like "sugar water" -- but thought the White Moscato and Sangria were fine.

"It felt like drinking a wine spritzer and a beer on a summer patio," one HuffPoster said.

Overall, the more experienced the wine drinker, the more likely they were to dislike Friends' wine. But Peleg isn't too concerned with wine connoisseurs; he's targeting millennials and perhaps college students -- who are of age, of course.

Will wine-in-a-can catch on? If wine-in-a-box did, then why not?

One HuffPost staffer who called Friends wine "gross" still conceded, "I see the point and I think it could become popular." 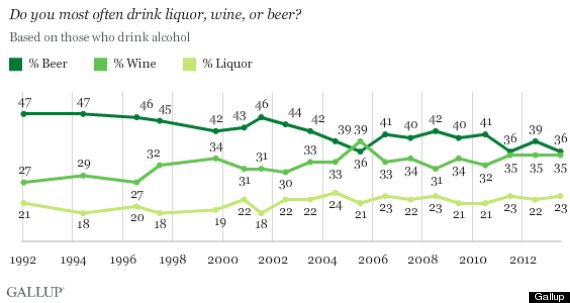 Gallup polling shows there's been a generational shift away from beer in favor of wine and, to a lesser extent, liquor. Part of this, people have theorized, is that Americans today are more health conscious. Even among people drinking beer, light versions are outselling full lagers.

In the next couple weeks, Peleg expects to see his products roll out in CVS stores around New York City. Since Friends is actually a "wine drink" with an alcohol level closer to beer's than normal vino's, it can be sold in convenience stores while brands like Yellowtail and Franzia cannot.

The Friends' moscato flavors are already sold on Spirit Airlines for $7, and the company doesn't think it's out of the question to have wine products sold domestically at fast food chains like McDonald's within a few years. Walmart stores in Texas and Florida also are carrying the product, the company said.

Note: If you're like us, when you hear "wine in a can," you might think of the episode of "It's Always Sunny In Philadelphia" where they drink the alcoholic beverage from soda cans. It's a little different, but here it is for comparison.

Worst Liquor Flavors Of All Time