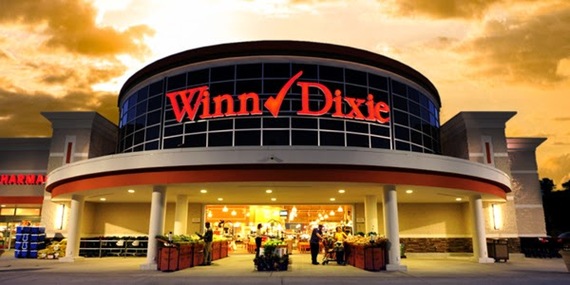 Image Source
The popularity of the Winn-Dixie chain of stores has remained for nearly a hundred years - a difficult feat to accomplish in the face of competition such as Wal-Mart. Yet, not only is this chain of stores well-loved, but it has also been featured in popular culture through the book because of Winn-Dixie by Kate DiCamillo about a dog found in one of the eponymous stores. The book was later turned into a movie in 2005, extending the popularity of the chain of stores beyond its traditional south-eastern US market.

Despite its long-standing association with Florida, the Winn-Dixie stores weren't originally founded in the state. In 1913, William Davis - the founder of Winn Dixie - started working in Clark Mercantile, a small store in the town of Burley, Idaho. In 1914, he purchased the store and soon afterward renamed it Davis Mercantile. However, grocery stores that accepted cash instead of credit started cutting into his business. So he took his brother's advice and in 1925 took a loan of $10,000 from his father to move to Miami, Florida. He used the $10,000 to purchase the Rockmoor Grocery, which he renamed Table Supply a couple of years later. At the same time, he opened four more outlets of Table Supply. By this time, his sons, Artemus Darius Davis, James Elsworth Davis, Milton Austin Davis and Tine Wayne Davis had also joined him in the business.

In 1931, the second acquisition, this time of the Lively Chain Stores for a sum of $10,000, added 33 new stores to the Table Supply Chain. In 1934 William Davis passed away, leaving the company to his four sons. The company continued to move from strength to strength and in 1939 the four Davis brothers were convinced by Bill Lovett, the owner of the Winn & Lovett chain of stores, to purchase 51 percent of his business which consisted of 73 stores. While the period from 1939 onwards was lacklustre due to World War II, once the war was over, the company used this acquisition to reach even greater heights. In 1944, the Davis brothers moved the company headquarters to what used to be the Winn & Lovett headquarters in Jacksonville, Florida and changed the name of their company to Winn & Lovett.

For the next decade, the company continued its spree of acquisitions, taking over names such as Steiden, Penney and Margaret Ann. 1952 was a landmark year for the company. It became the first industrial corporation from Florida to be listed on the New York Stock Exchange with the ticker symbol 'WIN'. In 1955, continuing its policy of acquisitions, the company took over Dixie home stores, which had a total of 117 stores, and changed the name of the company from Winn & Lovett to Winn Dixie Stores, Inc. By 1969, Winn Dixie had a total of 715 stores throughout the southern states. The checkmark in the Winn-Dixie logo was courtesy of another chain of stores that the company had acquired called Kwik Chek.

The 1980s saw a certain decline in the fortunes of the company. Winn Dixie had now passed to the third generation of the Davis family and Robert D. Davis was the man at the top. However, the time he spent leading the company was marked by flat growth rate in gross profits and increased competition from large chain stores as well as convenience stores. In 1988, he resigned his position as chairman - a position which was then taken over by his cousin A. Dano Davis. Despite these changes and other expansions and acquisitions in the 1990s, it became obvious that the company was struggling.

In the early 2000s, Winn Dixie had over 1000 stores. However, the stock performance of the company was extremely low, so much that it had to close 156 stores. In 2005, Winn-Dixie filed for bankruptcy and closed 326 stores including all its stores in the states of Texas, North Carolina, South Carolina and Tennessee.

In 2006, the company bounced back with a plan of reorganization that was duly filed with the U.S. Bankruptcy Court for the Middle District of Florida. In 2011, the company itself was acquired by BI-LO Holdings for approximately $550 million.

Winn Dixie is well-known for its Chek brand of soft-drinks. These include options for low calorie and low caffeine. Its budget brand is now known as Clear Value, while the Winn-Dixie brand is at the level of most national brands. The high-end brand made popular by the store is Winn & Lovett, considered a premium brand.

Since the death of William Davis in 1934, the company has had an association with the Mayo Clinic as the Davis family believed that William Davis' death could have been prevented by better medical advancements. When James E. Davis read Booker T. Washington's book Up from Slavery, he realised the extent of the racial prejudice faced by African Americans and Winn-Dixie started supporting colleges and universities that were considered historically Black.

The Stetson University School of Business Administration is another institution that has benefitted from the philanthropy of the Davis family. The Davis brothers endowed the university with a building named Davis Hall in 1967. In the 1990's the company also contributed to the Boy Scouts of America of the Central Florida Council. The contribution was substantial enough that the Camp La-No-Che was renamed to Winn-Dixie Scout Reservation.

The Davis brothers through their influence have also had a fairly profound effect on the state politics of Florida. In particular, former U.S. Treasury Secretary Donald Regan venerated and sought the advice of James E. Davis.