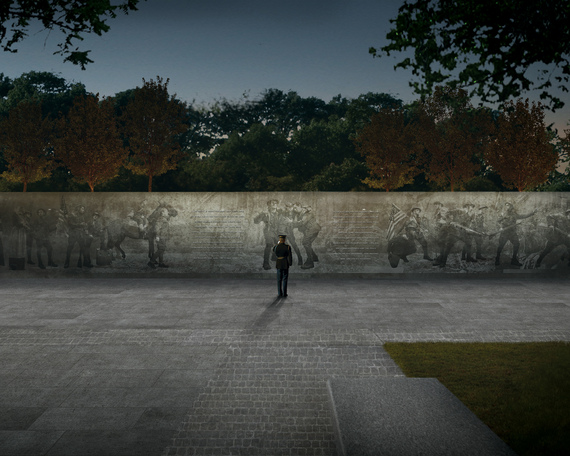 As noted here, while our nation's capital is blessed with an abundance of splendid parks, statuary, monuments and memorials and while there are two memorials in Washington, D.C. called World War I memorials, neither one meets the strict interpretation of what a "national" monument is or should be.

Certainly a sacrifice worthy of a truly national memorial.

In January 2013 Congress established the World War One Centennial Commission "to ensure a suitable observance of the centennial of World War I, to provide for the designation of memorials to the service of members of the United States Armed Forces in World War I..." In December 2014, Congress designated Pershing Park as the site for the memorial.

Finally, in May 2015, as part of promoting such a "suitable observance" of the centennial of World War I (from 2017 through 2019), the Commission opened an international design competition for the new National World War I Memorial to be built in Pershing Park, on Pennsylvania Avenue, one block from the White House and with a clear view of the U.S. Capitol (Below). 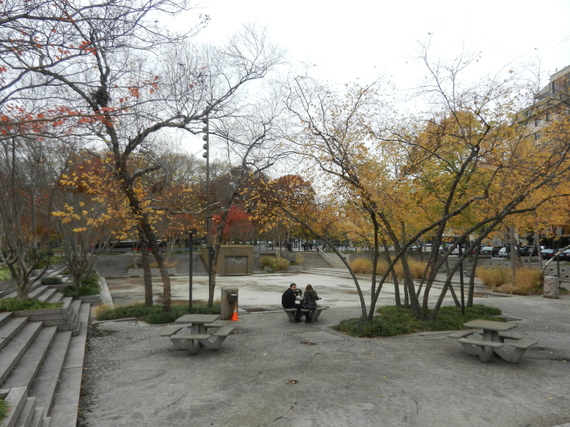 The memorial -- the largest tribute to our veterans in a decade -- as envisioned by the Commission will serve as "both a dynamic urban space and, more importantly, a fitting memorial to a generation of veterans whose service and sacrifice were no less valorous and heroic than that of the veterans of later wars - the generation that were the fathers and mothers of 'the greatest generation.'"

Over the next three months, the Commission received more than 360 design concepts from designers around the world. An independent jury of design professionals and historians selected five of the design concepts and, on August 19, 2015, Robert Dalessandro, Chair of the World War One Centennial Commission, announced the five finalists.

Selected aspects of the five submittals can be seen here and the full design details can be viewed here.

During the final stage of the competition, the five design teams consulted with representatives from the Commission, the National Park Service, the U.S. Commission of Fine Arts, the National Capital Planning Commission, and other stakeholders to develop and refine their design concepts. According to the Commission, the designs must meet a number of criteria related to design merit, site considerations, environmental impact, historical preservation, sustainability, and cost.

The designers submitted their final concepts in December 2015. They can be seen here.

The competition jury again reviewed the finalists' submissions and, earlier this month, recommended a design for selection by the Commission.

Today, January 26, the Centennial Commission announced it has selected the design concept "The Weight of Sacrifice" by the design team of Joe Weishaar & Sabin Howardf for the National WWI Memorial at Pershing Park.

Perspectives in lead image and below 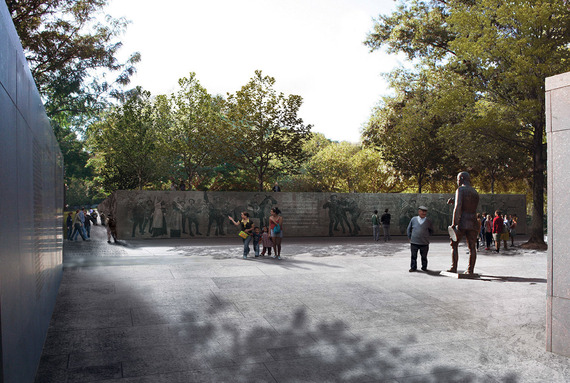 The Weight of Sacrifice perspective 1 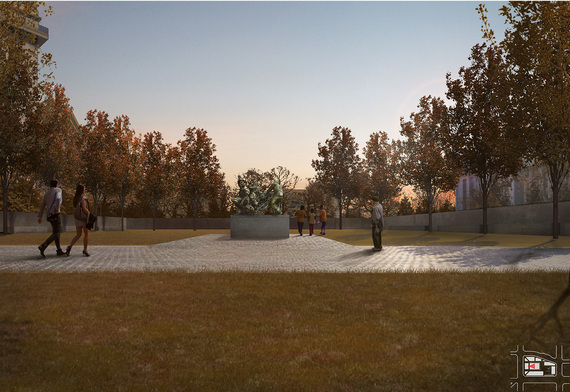 The Weight of Sacrifice perspective 2 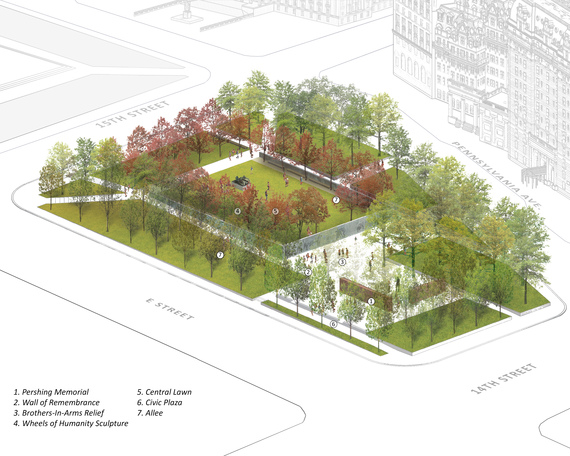 The Weight of Sacrifice aerial perspective

"The Weight of Sacrifice" from the Project Overview Narrative:

The fall sun settles on a soldier's etched features, enough to alight the small girl patting his horse. Above him 28 trees rise up from the earth, flamed out in brazen red to mark the end of the Great War. He stands on the precipice of the battlefield, surveying the rising tide which has come to call his brothers from their havens of innocence. The figures before him emerge slowly, at first in low relief, and then pull further out of the morass as they cross the center of the wall. They all trudge onward, occasionally looking back at the life that was until they sink back in and down into the trenches.

This is a moment frozen in time, captured in the darkened bronze form which has emerged from the soil to serve as a reminder of our actions. Along the North and South faces we see the emblazoned words of a generation gone by. 137 feet long, these walls gradually slip into the earth drawing their wisdom with them. Around the sculpted faces of the monument the remembrance unfolds. Each cubic foot of the memorial represents an American soldier lost in the war; 116,516 in all. Upon this unified mass spreads a verdant lawn. This is a space for freedom built upon the great weight of sacrifice.

It is expected that the Memorial will be opened to the public by Nov. 11, 2018, the centennial of the Armistice. It will then rightfully join three other national memorials commemorating and honoring the men and women who served and died in the three other major wars fought by the United States in the 20th century: The Vietnam War, the Korean War and World War II.

All images and photos courtesy World War One Centennial Commission