I am devastated by the recent Amtrak crash outside Philadelphia. Such loss of life and injury to people just going about their routine hit close to home for me because that is my weekly route from Washington, D.C., back to my congressional district in New York City. This accident amplifies the need for vital long-term investment in our infrastructure, such as our roads and rails. It is time to upgrade our nation's transportation systems to make our country globally competitive.

Currently, America holds a national infrastructure grade of D+, a rating designated by the American Society of Civil Engineers in their 2013 Report Card for America's Infrastructure. This report reviewed and rated different areas, including rails, schools, drinking water and hazardous waste. Each category was given its own individual score, with the average of D+. This is a shame given that just a few decades ago America's transportation system was the envy of the world.

By comparison, last month, Japan's new magnetic levitation train, or "maglev," as it is referred to, reached a record-breaking speed of 375 miles per hour during a test run past the peak of Mt. Fuji. Though it will only top out at a speed of 313 miles per hour while actually carrying passengers, the train will still make the 219-mile journey between Tokyo and Nagoya in approximately 40 minutes. Compare this to the speed of Amtrak's Acela Express which operates at a top speed of 150 mph: Making the trip between our country's two most powerful cities, New York City and Washington, D.C., a distance nearly identical to that between Tokyo and Nagoya, will take more than three times as long.

As someone who frequently makes that trip, I know firsthand that only a significant investment will get the Northeast Corridor modernized. For the last 20 years the U.S. spent about 2 percent of our gross domestic product (GDP) on infrastructure; meanwhile other countries in Europe and Japan spent around 5 percent, with China and India spending 9 percent and 12 percent, respectively. How can we win the competition if they are far outspending us on such crucial investments?

As the Congress is currently debating the Trans-Pacific Partnership (TPP) and the trade-promotion authority (TPA) to grant President Barack Obama, we are rightfully talking about jobs. But we also need to discuss our efforts on infrastructure. Transportation is the blood of moving goods and people. It amounts to time and money. If we do not want to lose out on the deal with other rapidly developing countries involved in the TPP, we have to transport people and products around more efficiently.

The Highway Trust Fund, which provides money for construction projects all across the country, is set to expire at the end of May. Instead of agreeing on a long-term solution, the Republican-led Congress has recently been kicking the can down the road. The House just voted for a two-month extension when it should be our priority to extend the Highway Trust Fund for years. The TPP may not affect everyday Americans, but working trains and safe roads certainly do. The U.S. government spends over $50 billion a year on surface transportation programs, most in the form of grants or loans to states and municipalities. And over the last 10 years we have spent more than $52 billion more than we have taken into the Highway Trust Fund, according to the Congressional Budget Office. This is unsustainable.

This is why we must support efforts to shore up our outdated infrastructure. Spending the necessary money to not only fix our failing highways and bridges but actually modernize them and make them practical for the 21st century is worth the fiscal hit. Our public investment in essentials such as roads is lower today than it ever has been in the past 50 years -- about 10 percent of what we allocated in the 1960s. We must make certain that America remains a leader on the world stage. This will happen when we take the necessary time and money to advance our transportation system, which is an investment in our people and the future of America. 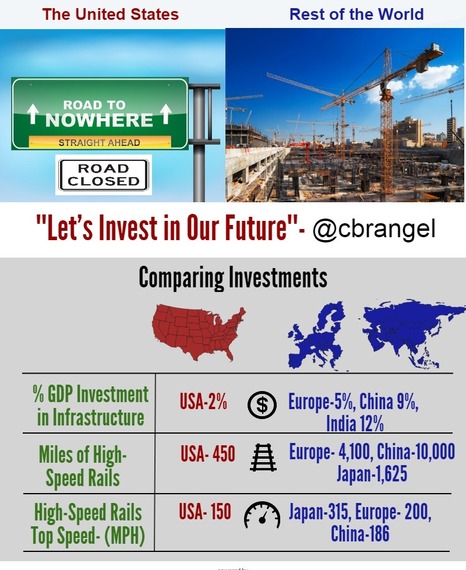