PITTSBURGH -- As the Winter Classic got wetter and wetter, the NHL nearly experienced its first rain delay. The Washington Capitals weathered the conditions with a performance that proved they can handle a big-game setting, even one in the great outdoors.

"It was raining pretty good out there," Fehr said. "But it was a perfect night."

Fehr gave Washington its first lead at 2-1 in the second period after Penguins goalie Marc-Andre Fleury abandoned the net, then sealed it with a breakaway goal in the third. Mike Knuble also scored on a power play.

Washington goalie Semyon Varlamov, starting because of Michal Neuvirth's thigh injury, gave up Evgeni Malkin's goal in the second period but turned aside the other 32 shots.

"I can't imagine what football players (feel) playing like this," Ovechkin said. "It's unbelievable. It makes you want to do it all the time."

The game was originally scheduled for 1 p.m. before the NHL pushed back the start to 8 p.m. because of the rain threat. Neither team seemed to mind, and the Capitals - led by an animated and motivated Ovechkin - clearly enjoyed the prime-time stage. Even if it was a slick one.

And the Capitals, perennial playoff underachievers, showed they can handle the main stage for a change. While this was far from a playoff game, it's certainly the kind of win that can ignite a team that won the Presidents' Trophy last year as the regular-season's best squad, only to lose in the first round of the playoffs vs. Montreal.

"It was close to the Stanley Cup finals," coach Bruce Boudreau said. "We don't deny it meant more than just two points. It was a fabulous game."

After a scoreless first period in which the two teams adjusted to playing outdoors at night - many never had at any organized level - and the choppy ice, the Penguins took a 1-0 lead. Malkin took Kris Letang's banked pass off the boards to beat Varlamov inside the near post at 2:15.

Malkin's 14th goal caused a never-before-seen sight at Heinz Field: fans in the crowd of 68,111 twirling Terrible Towels to salute a Penguins goal rather than a Steelers touchdown.

Pittsburgh couldn't maintain the momentum, though, as the Capitals held down NHL scoring leader Crosby, who went scoreless for a second successive game after posting at least one point in 25 consecutive games. He had five shots.

"You know they're not going to make those tic-tac-toe plays no matter how they good they are on this ice and in these conditions," Capitals defenseman John Carlson said. "So you can play it a little bit differently. You can really not worry about (Crosby) getting behind you and making a 40-foot pass tape-to-tape."

The Capitals, who lost at home to Pittsburgh 3-2 in a shootout on Dec. 23, tied it about 4 1/2 minutes later when Knuble shoveled a shot past Fleury amid a tumble of bodies in the crease. Zbynek Michalek upended Mike Green just to the right of Fleury, and Knuble took advantage of the confusion to score his ninth.

Fehr - pronounced Fair - gave Washington the lead at 14:45 of the second on a gift goal. Fleury went behind the net to play the puck, but Marcus Johansson beat him to it and fed it in front, where Fehr tipped it into an empty net.

The conditions may have been bad but, for the Capitals, it became a Fehr-weather game.

As a steady rain fell during the third, Fehr put it away with eight minutes remaining by racing to Jason Chimera's up-ice pass and, a step ahead of defenseman Paul Martin, beating Fleury cleanly with a hard wrist shot from between the circles for his seventh goal.

"It's frustrating," said Fleury, who made 29 saves. "There was so much build-up to the game. It's definitely disappointing to lose that one."

The teams changed ends halfway through the third period, to keep it fair for both squads amid the worsening weather.

"It was the same conditions for both teams," NHL commissioner Gary Bettman said. "In every stoppage, we were in communication with both teams. And while not perfect, the puck was moving pretty well out there."

Ovechkin had a goal disallowed in the third, after incidental contact with Fleury. Pittsburgh's Mike Rupp had the same situation on Varlamov in the second.

"In the third period, weather became a problem," Ovechkin said. "But we handled it, and it was a pretty good game."

Fehr, who had a career-high 21 goals last season, posted his second career multigoal game, and it helped the Capitals win their fifth in six tries since losing eight straight. Pittsburgh lost for just the fifth time in 21 games.

The fourth Winter Classic became soggy in the third period, when the ice maintained a like-new look as if it was constantly being resurfaced by a Zamboni. There also was a trail behind the puck on any shot or pass.

"Pucks were bouncing everywhere," Fehr said. "Sometimes they're sticking on the ice. It was really tough to make any passes out there."

Maybe this was a first, too: Penguins coach Dan Bylsma wore a Tom Landry-style fedora behind the bench. Capitals coach Boudreau chose not to wear headgear on a 50-degree night - the warmest yet for the Winter Classic - that caused the temporary ice to become choppy.

Ovechkin was a victim of the ice, tumbling onto his stomach while winding up a shot from the blue line with about three minutes remaining in a scoreless first period.

Crosby also took a hard fall, but it had nothing to do with the ice. He was felled by a blindside hit to the head from Capitals center David Steckel just before the end of the second period.

"I was looking the other way and then I turned to go and I guess he hit me," Steckel said. "It obviously wasn't intentional."

Crosby got up gingerly and had a noticeable limp as he walked down the long walkway to the locker room, the same one normally used by the Steelers. But he took the Penguins' first shift of the third period.

"He got my head, for sure," Crosby said. "But I can't comment on it. I don't even know. Maybe it was so far behind the play the officials didn't see it."

It was a physical game throughout, as Capitals-Penguins games usually are. The Eastern Conference teams have maintained one of the NHL's best rivalries for years, one that accelerated when Crosby and Malkin joined the Penguins and Ovechkin the Capitals. Pittsburgh beat Washington in a classic seven-game playoff series in 2008 - indoors, of course - en route to winning the Stanley Cup.

Playing at night allowed the Penguins' dark blue sweaters and Capitals' old-style white and red to show up well on television, and the red and blue lines - lit by the huge banks of lights in an NFL stadium - appeared brighter than ever.

Penguins forward Jordan Staal, out all season with an infected right foot and a broken right hand, played his first game in nearly eight months. He showed a lot of jump early, but didn't figure in the scoring.

Varlamov had a lot to do with that.

"It shows he can play in pressure situations," Boudreau said. "He sort of just took it mentally on him that he wasn't going to allow anything. He's making a great case for being the No. 1 goalie." 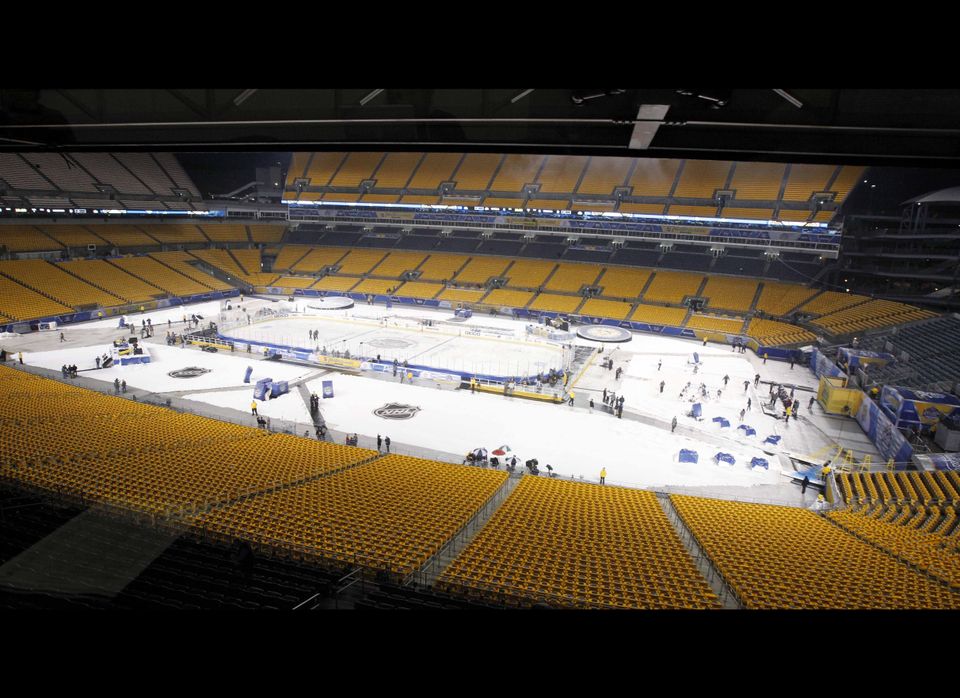