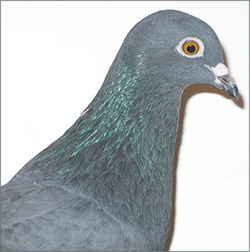 It's a coup to find a piece of toasted sesame bagel not ruined by cream cheese, butter or jam, and I was so distracted I didn't hear the approaching car until it was too late. I don't know how many of you know this, but when our tail feathers are completely ripped out, not only can't we fly, the shock causes us to lose all the other feathers on our lower back as well. So there I was. It had started to drizzle and I huddled on a West 70th Street sidewalk, a major thoroughfare for dog walkers I should add, looking like a pink plucked chicken.

"What disease could have caused this?" I heard a female voice say as I was unceremoniously lifted into the air. Everything after that is a blur: being carried, hearing paper ripped, water running, feeling something creamy spread on my back, a door closing and then sudden quiet. Through muffled sounds on the other side of the door I could make out the female voice ask a male voice to do something that sounded like "google" and whatever this google was, it correctly determined that I did not have a disease but rather had been in some sort of accident. "Good news!" the male shouted out. "Tail feathers do grow back. Do you want the bad news?" "What?" asked the woman. "Two months" was all the man said and there was a burst of laughter before I heard, "Seriously, how are we going to keep a pigeon in the bathroom for two months?" 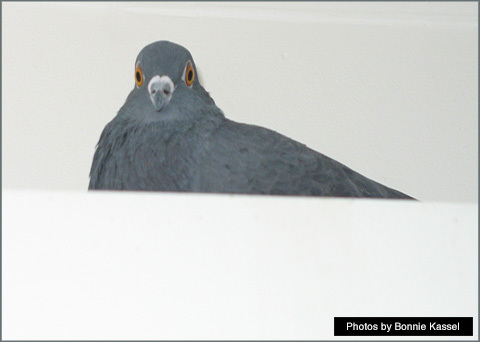 A tall cabinet provided the perfect place to sleep each night

This google thing must be something terrific because it stressed the importance of fat and protein in my diet and I was given a mix of seeds I loved almost as much as my once beloved bagels (which for obvious reasons had lost some of their appeal), yet I questioned the market research that concluded our breed liked split peas. I was introduced to crispy Wasa crackers and boiled rice which I heard were probably good for me, treated to flaky bits from the crust of croissants, and quickly discovered I could become addicted to something called corn bread. I'd never had anything so saturated with intense flavor in my entire life. After I unraveled several rolls of toilet paper, they got the message that I needed toys to keep me from getting bored. And because exercise was deemed essential, I was let out of the box and given free rein of a previously spotlessly clean, mostly white bathroom. Two doorknobs were tied together to keep the resident cats from throwing their weight against the door and, god forbid, getting in. If you ask me, the intelligence of cats is overrated. Could they really believe I didn't know they were hunched motionless with their noses pressed against the crack beneath the door waiting for me to make a mistake? 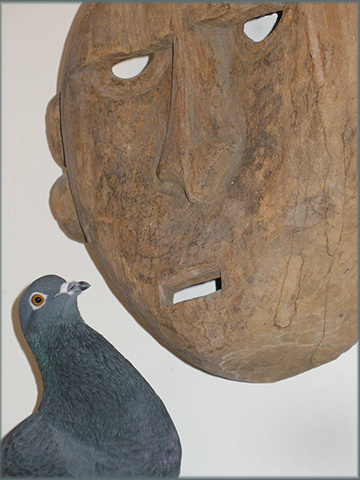 I must say I was a pretty good ambassador for my entire species. Not only was I free of mites or diseases, the "splashes" I had no control over didn't stain and were easily wiped up. My molting some might consider messy, the woman found touching when she read this fluffy down could be used to soften and warm the nest of chicks I'd one day help rear. (How she knew I was a boy was just one of the numerous facts she learned about me in the time we were together.) Sometimes she used words I didn't understand. Apparently I was a "metaphor" for the many wondrous things around her she knew nothing about; or once there was a reference to a Jackson Pollock as she picked up soiled newspaper from the floor of my room.

New Year's was approaching and I heard that a party was taking place at our apartment. A long conversation ensued over the guest list because for some reason only animal lovers could be invited. Apparently the man and woman had friends they loved dearly, but who would think they were "nut jobs" (whatever that meant) if they had to explain that I was staying in the bathroom. 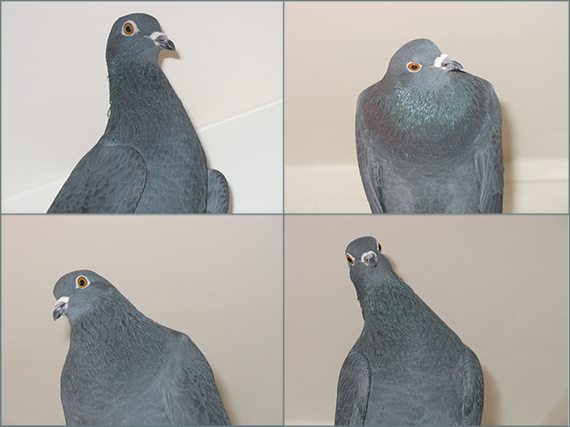 Right on schedule, long, sturdy, cream-colored quills began to protrude from my back. Then, like a flower unfolding in a time-lapse nature film, the charcoal gray tips of the quills opened into feathers. Each day I looked more like a healthy bird should. Shower time reminded me of humid New York summers and sometimes during these showers the woman would make up songs to sing to me, prefacing each songfest with an insistence that we could only do this when we were alone. I know I'm betraying a confidence, but when she sang, ♫ ooh, ooh, ooh, I love you; coo, coo, coo, you love me too, ♫ I would start cooing like crazy. It was the only way I knew to show her I was on the mend and not distressed by being cooped up.

Normally this is where my story would end, but everyone in the Northeast will remember that 2015 was one of the coldest, snowiest winters on record; and the weather coupled with scarce food meant I shouldn't be released. So February ran into March, and March into April before I was once again carried, this time in a box. When the top opened, the brightness at first stunned me, but when my eyes adjusted and I felt a breeze all around me, I mustered the courage to fly up to the nearest tree. The last whisper I'd heard was, "Godspeed. Have a long and good life." When I looked down I could see that the woman was watching me, her eyes glistening, and knew I wasn't the only one relieved that I could fly. I flew back down and made a complete circle over her head before flying across Central Park West into the park. At first I had to concentrate on pumping my wings as hard as I could; it had been four months since I'd had any real exercise. Then it all came back to me, but with a joy more profound than I remembered. The sound of wind rushing past my ears, the hot sun on my back, a canopy of pale green beneath me, company of my own kind waiting. I had been given something most of us only dream. A second chance.

The Wild Bird Fund, #565 Columbus Avenue @87th street, is the only wildlife rehabilitation and education center located in a major American city. They offer invaluable advice--either in person or by calling 646-306-2862. A perk of becoming a member or making a donation (they receive no public funding) are inspiring behind-the-scenes tours. Volunteer services are always needed. www.wildbirdfund.org

The Center for Avian and Exotic Medicine at #562 Columbus Avenue is a specialty vet practice that frequently partners with the Wild Bird Fund. 212-501-8750; avianandexoticvets.com

Hagen Pigeon & Dove seed is packaged in many sizes. Small 3 lb. bags cost approximately $7 each. Petland Discounts has branches throughout New York, New Jersey and Connecticut. If you're not in the tristate area, the seed can be ordered online.