Skiers and snowboarders looking to plan their winter vacations are facing a more uncertain seasonal weather forecast than they have worked with during the past few winters, but it’s also a more optimistic one when compared to last winter. The 2011-2012 winter was the nation’s second-warmest on record, and saw the least amount of snow at ski areas across the country since the winter of 1991-92.

The lack of snow last year led to a nearly 16 percent drop in skier and snowboarder visits compared compared to the winter of 2010-11, according to a survey by the National Ski Areas Association (NSAA).

Breakdown of ski area forecasts based on seasonal winter forecasts and expert interviews:

“. . . The 2011/12 season came as an abrupt reminder of the whims of the weather and the impacts that extraordinarily low snow and warm temperatures can have on the industry and the motivation of its customers,” the NSAA survey said. “Fortunately, seasons such as the one just ended have proved to be historically rare, although the risk of periodic recurrence (potentially as exacerbated by long-term climate change) may provide cause for resort operators to review opportunities to buffer resort operations and finances from future weather disruptions.”

There are many reasons why this winter is likely to play out differently than last year, chief among them being the conditions in the equatorial tropical Pacific Ocean. Last year there was a strong La Niña event, with much below-average sea surface temperatures in the region. The La Niña combined with a climate cycle in the North Atlantic as well as other factors to limit the intrusion of Arctic air into the U.S., effectively shutting down the formation of snowstorms in many parts of the country.

El Nino events, as well as La Nina events, can play a major role in determining the main winter storm tracks across North America. During El Niño winters, for example, the ski resorts of California, Nevada, and New Mexico can receive above-average snow as a parade of storms sweep in off the Pacific Ocean. El Niño winters can be snowier in the Northeast as well, benefiting the resorts of the Mid-Atlantic and New England.

The lack of an El Niño or La Niña event this year, which is referred to as “neutral” conditions, translates into a fuzzier winter forecast, and distinguishes this winter from the past several winter seasons. “It’s definitely extremely difficult ... this winter forecast is one of the most challenging we’ve faced in the last few years,” said Jon Gottschalck of NOAA’s Climate Prediction Center in College Park, Md. 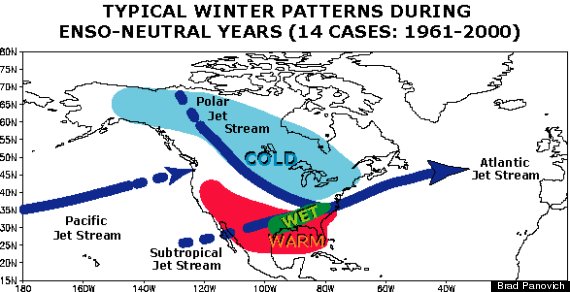 The National Weather Service’s updated winter weather outlook, released on Nov. 15, shows that odds favor above-average temperatures in the Southwest U.S. extending to parts of the Rockies, but other than that, the temperature and precipitation outlook provides little guidance for skiers. The majority of the country is designated as having equal chances of above-average, average, or below-average precipitation from December through February, for example.

However, just because El Nño is likely to be a no-show doesn’t mean that there are no clues that can help steer skiers to certain regions of the U.S. and Canada this year.

Other winter weather outlooks, such as one produced by The Weather Channel, show that the northern tier of the country, including ski areas in states such as Idaho and Montana, are likely to see a colder-than-average winter.

To Judah Cohen, a seasonal forecaster at Atmospheric and Environmental Research in Lexington, Mass., the lack of an El Niño, or the possibility of a weak El Niño event, suggests that the Eastern U.S. may be slightly cooler than average, while the West will come in a bit milder than average. 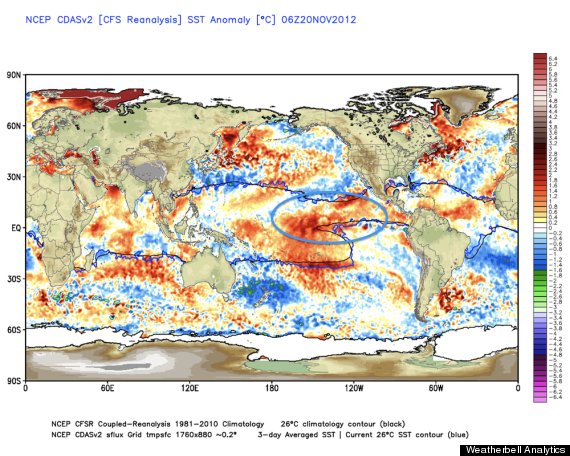 Sea surface temperature departures from average, showing an area of warmer than normal water in the tropical Pacific, which is circled in blue. These waters aren't quite warm enough to meet the threshold of an El Nino event. (Weatherbell Analytics)

The Siberian-U.S. connection plays out through a complicated series of events, which includes a particular setup of a natural climate pattern known as the Arctic Oscillation, or AO. The Arctic Oscillation helps influence the movement of cold, Arctic air during the winter. When it is in a “negative” phase, cold air moves more easily into the Eastern U.S., raising the odds of snowstorms. When it is a “positive” phase, cold air tends to get bottled up in Canada, reducing the snowfall potential in major cities from Washington, D.C., to Boston.

This fall has featured above-average snow cover in Siberia, “so that is suggestive of a negative AO for this upcoming winter,” Cohen said. “Things are looking more promising for Eastern ski resorts than last year in that regard.”

During the winter of 2011-12, the Arctic Oscillation was in a strongly positive phase for much of the time, which limited the supply of cold air that storms could work with.

Tony Barnston, lead forecaster at Columbia University’s International Research Institute for Climate and Society (IRI), said the northern Rockies and Northwestern U.S. could see more snow this year than they would have, had El Nino fully developed. “On the other hand, the southern and central Rockies will not have as much precipitation as we would expect with an El Nino and may get less snow, and be a bit warmer, than we would expect with El Nino,” Barnston said in an email conversation.

Barnston said the lack of a clear “signal” from El Niño or La Niña makes the winter forecast somewhat more complicated, and more dependent on the individual weather events that cannot be predicted a few months in advance.

In light of the complicated winter forecast, what is a skier or snowboarder to do?

First, it’s already clear that anyone looking to do some early season skiing or snowboarding won’t go wrong by heading West, according to Joel Gratz, a meteorologist and CEO of OpenSnow.com, a website and consulting service that helps connect skiers with the fresh powder they crave. Ski resorts in California, Oregon, Utah and Washington have all been dumped on by a series of storms in recent days, with more snow in the forecast over Thanksgiving week.

Fresh snow has also fallen at major ski resorts in British Columbia, such as Whistler-Blackcomb.

And in the East, it’s been cold enough for some resorts to start making snow and opening up for the season, with even colder temperatures predicted soon after Thanksgiving.

“We are off to a much better start this early winter than last, resorts are open throughout the West and in the northern parts of the Midwest and East,” said Michael Berry, an NSAA spokesman.

“Early season weather is very important,” Berry said. “We believe there is significant pent-up demand and a series of early season storms will release that pent-up demand, particularly for mid-season reservations at destination resorts.”

Gratz said skiers should focus more on shorter-term weather forecasts that are more reliable and provide greater details than long-range projections, noting that many of the major ski areas in Colorado don’t have much of a statistical relationship between snowfall and El Niño or La Niña events. “What I generally tell people also is if it’s a moderate-to-strong La Nina, then the Pacific Northwest does well,” Gratz said. “Anything in between . . . offers a lot less predictability.”

He recommends that skiers book refundable trips through airlines such as Southwest, which makes such fares relatively easy to obtain, and take advantage of the “snow guarantees” that some resorts offer to give skiers the ability to postpone a trip so that it better coincides with a snowstorm. “There’s a lot of flexibility that happens now,” he said.

Winter Snow Outlook Offers Hope For U.S. Skiers And Boarders
The Earth From Above