In the last few years, I have grown more aware of and more intimate with the role that light and dark play in my life, but the truth is it's a theme that has run through my whole life. There's no better example of this than my family's over 30-year participation in a traditional party on the winter solstice. That the party is referred to by almost all as "the Solstice" hints at how iconic the event has become.

The party, a black-tie ball started by family friends my grandparents' age, is held on the 21st of December no matter what day of the week that is. Over the years, my parents' generation began hosting, and when the original host passed away, my parents joined as co-hosts. Through all of these rotations of years, through the cascading generations, the Solstice has endured. There is so much that doesn't change: the white carnations with red ribbons tied around their stems that are pinned on each guest's lapel; the small plastic cups of white wine; the humid coatroom on the second floor stuffed with short fur coats and long wool ones; women sitting on a small bench by the window to pull off their snowboots and put on their heels.

Around 11:30 p.m. Eric leads a ceremony, based on an ancient Mayan ritual, that his anthropologist father (the original host) taught him. The lights in the old, drafty boathouse where the ball has been held forever are dimmed, Eric lights a candle, and the entire room invokes the return of the sun with a Mayan chant. The candles are lit, one to another, and slowly, the room fills with candlelight. 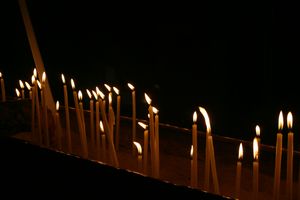 After the candles are extinguished and the light comes back on, the band begins playing -- the same song every year, which I'll recognize for the rest of my life, though I could not name it or sing it for you -- and Eric and the other hosts begin to dance. Gradually, they snowball out into the crowd, each person breaking off and starting to dance with an onlooker. Within a few minutes, usually right as we cross the threshold of midnight, there is a whirling energy in the room, reverent and slightly raucous at the same time.

I remember dancing with Vogtie, the first and original host of the Solstice, following his masterful lead, the glow of candles still practically visible in the air, a new trust in the light's return glowing, nascent but bright inside of me. I don't know how old I was the first time I went to the Solstice, but I was definitely a child. Since then, I have missed a few years but have mostly returned, year after year, to that same candlelit boathouse on a dark December night to witness a ritual that now anchors my holiday season. 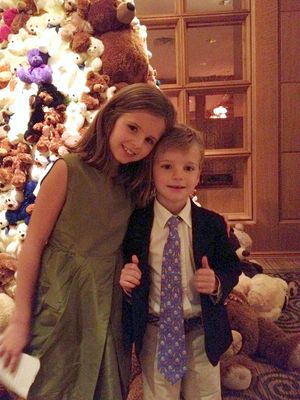 I'm sure many of the 250 guests come every year because the Solstice is a great party. But I swear there's something else, too: a heightened awareness of the way the evening sits atop a fulcrum, squarely on the turning point of the lunar year, a tangible sense that this is the closest we get to touching the universe's rhythms of light and dark. Many of the same people come every single year, drawn back to the boathouse on that singularly dark night, on a Sunday or in a blizzard, by some power that I know goes beyond simply the call of a cocktail.

This year we will bring our children, who are 10 and almost 8, to the Solstice for the first time. I look forward to seeing it all for the first time again, to seeing the candle flames flaring in the dark night reflected in Grace's mahogany eyes, to the expression of wonder that I'm sure will come over Whit as he listens to 250 people intone an ancient chant in unison. Their attendance is made all the more special by the fact that this year will be the last Solstice. As the Mayan calendar ends in 2012, so too will this celebration. Just like so many moments of parenting, the evening will be both beginning and end wrapped together. As the light comes back on, Grace, Whit, Matt and I will for the first and last time join our voices to the chorus of centuries of people, all invoking the return of the light, of the sun, commemorating the way this planet spins on. And then, the four of us will spin into the dance, echoing the great choreography of the seasons, the endless turning of dark into light and back again.