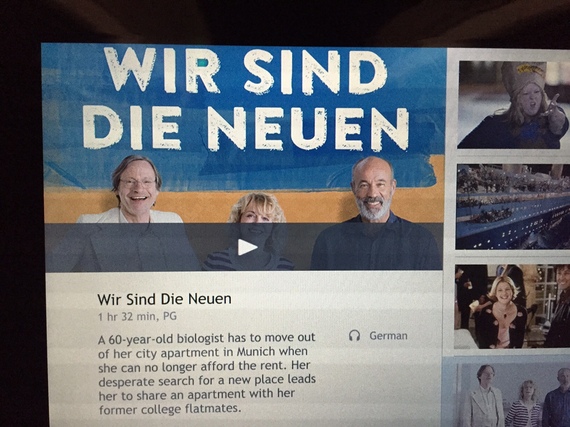 When sleep is the last thing on one's mind, what does one do to pass the pseudo slip of a night on a flight to Berlin? Many passengers snooze the quiet hours away, gap-mouthed slumpover pros. I envy them and their relaxed oblivion -- meds or no. Like a child, I am still plagued by the excitement of travel, of getting there and diving headfirst into the culture of a land and city I love and feel so connected to. I am chalking up yet another week-long visit to my relatives in Berlin, the last known extended family on my late Father's side, the main purpose being to spend time with my 89-year-old Aunt while she still lives, rather than scuttle over in typical familial-duty fashion when it is, as they say, too late.

The Tante I visit is my diminutive Aunt of whom I wrote years ago (Sisterhood of the Traveling Pink Sweater). I spend time with her in her graues Gärtchen of a post-war apartment so that my memory of her can still build via real-time interactions. My Aunt's mind and sense of humor are selectively intact, so our time together is now based solely on conversation, laughter, a piece of Kuchen, maybe a sip of Sekt, more talk, more laughter. And speaking of humor....

On board, in the dark, with more How Long Til We Get There than was good for me, I needed to fill my time quietly, like a good and considerate traveler. I decided to watch whatever German-language films were offered, with the dual intention of being entertained and re-acclimated to my second language. I selected a film called Wir Sind Die Neuen (We Are the New Ones), written and directed by Ralf Westhoff, a 2014 piece set in Munich, nominee and winner of several German film awards, basically unknown here in the States. The story pits a trio of reunited, middle-aged friends - fun-loving, creative types - roommates once more after 30+ years, against a trio of über-high-achieving millenials, brilliantly portrayed as pretentious and anemically uptight, who introduce themselves to their neighborly elders with warnings - that they will not go and fetch their groceries for them, and to please keep things quiet since they must study for their exams, bye-bye, aufwiedersehen.

The set-up, from the rickety euro-elegance of the old apartment building to the hilarious discourse between friends and versus the student elitists is slapstick at its classic, everyman's best. And how it works, from wine-slinging conflicts and thumping broomsticks to the eventual resolutions and transformations (Guess: who helps whom?), which though predictable, is absolutely delightful and thoroughly satisfying.

As a child of the 60s who herself is now only starting to get how great the accrued decades serve me as Mensch and woman, I learn to celebrate in my everyday precisely what the jist of "Wir Sind Die Neuen" conveys. Commercially and socially, trends overwhelmingly target younger income earners whose primary focus remains defaulted ever longer on self, for reasons practical as well as entitled, thanks in no small part to what is now decades-old, child-centric parenting styles. Bemused by the ageist Angst I as older-but-not-that-old American consumer observe and experience, I welcome good-natured - if not outright hilarious -- messages such as this film's, which speak volumes on my behalf - which just might serve to help our young ones navigate their own best courses:

2) Work & play: like food groups, you need generous helpings of both - have fun

3) Don't take yourself too seriously - find the humor

Wir Sind Die Neuen is so well written and so well crafted that I would love to see it cross the Atlantic and try its legs out here in the States, with either (quality, colloquialistically cognizant - Ralf: I'm on call) over-dubbing or sub-titles. I want to share Wir Sind Die Neuen with my husband and friends - to let them see a bit of a country and culture I love and enjoy a story that, in the dark plane en route to Berlin, made me laugh like a not-so-good passenger -- out loud -- over and over again.