The latest issue of Wired magazine is sparking heated controversy because of its cover, which show a woman's breasts -- and nothing else.

The breasts, accompanied on the cover by the tagline "100% Natural," are advertising a story by Sharon Begley about a new, more "natural" form of tissue regeneration that could dramatically alter both cosmetic surgery and, possibly, lead to more serious medical breakthroughs.

But many women criticized Wired for the cover, saying the magazine was objectifying women to sell copies.

One of the most vocal critics was Cindy Royal, a technology writer. On her blog, she described her reaction upon getting the issue in her mailbox: 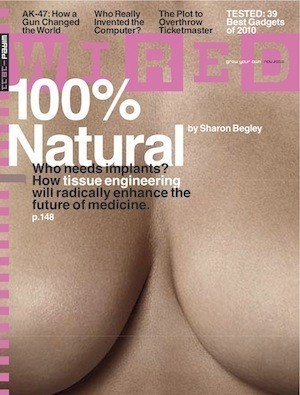 Royal also criticized Wired more broadly, saying that the magazine rarely featured women on the cover unless they were in sexualized poses. "How exactly are young women supposed to feel about their role in technology by looking at your magazine?" she wrote.

Anderson actually replied in the comment section of Royal's post. He took issue with her characterization of the covers that did feature women, but acknowledging that there were not enough of them. He did, however, defend the breast cover: