Edward Snowden's latest media move is perhaps one of his most provocative.

The whistleblower gave a lengthy interview to Wired magazine, which also brought famed photographer Platon to Moscow to take pictures of him. The picture that wound up on the cover shows Snowden holding the American flag: 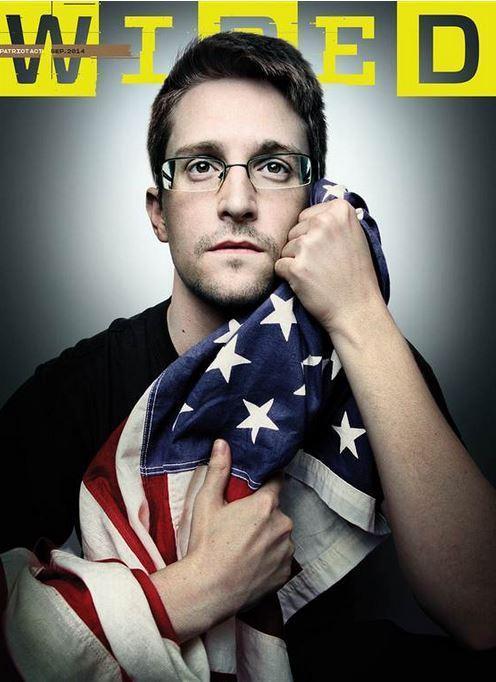 Wired editor Scott Dadich wrote that Snowden had to think a bit before deciding to use the flag:

He said he was nervous that posing with the flag might anger people but that it meant a lot to him. He said that he loved his country. He cradled the flag and held it close to his heart. Nobody said a word, and the hairs on the back of my neck stood up. We all sat there for a long moment, studying him. Then Platon yelled, “Don't move!” He clicked off frame after frame, making tiny adjustments to both the lighting and Snowden's posture, sometimes asking for him to look into the lens, sometimes just above it. We had our cover.

A word about the flag: Dadich said it was the same one that Platon had used in a photoshoot with Pamela Anderson, thus lending it a bit less reverence.

That Snowden @Wired cover with the flag? This is the flag he's holding. Seriously http://t.co/97vfmNeaLn pic.twitter.com/Rn6zVLG6KG

The photo immediately set Snowden haters on edge. Others had similar thoughts:

he should be hugging the russian flag, or maybe putin himself pic.twitter.com/PZIfW1hu9C

Snowden is both a whistle-blower AND traitor.Went out of his way to hurt US. This is BS. #wiki pic.twitter.com/BqiT04JgGF

Others praised the cover, though:

What a cover. Snowden on the cover of Wired, photographed by Platon http://t.co/fPaCPa4yII pic.twitter.com/PrElMjrgdY