The growth of "cell phone only" Americans is cooling off only among young adults. Few are optimistic about prospects for peace in the Middle East. And an epic interactive graphic shows how young adults acquire partisan attachments that last a lifetime. This is HuffPollster for Tuesday, July 8, 2014.

PERCENTAGE OF WIRELESS HOUSEHOLDS CONTINUES TO RISE - Stephen J. Blumberg and Julian V. Luke: "Preliminary results from the July–December 2013 National Health Interview Survey (NHIS) indicate that the number of American homes with only wireless telephones continues to grow. Two in every five American homes (41.0%) had only wireless telephones (also known as cellular telephones, cell phones, or mobile phones) during the second half of 2013—an increase of 1.6 percentage points since the first half of 2013 and 2.8 percentage points since the second half of 2012. However, these increases are smaller than those observed in previous years….. For July–December 2013, there are five demographic groups in which the majority live in households with only wireless telephones: adults aged 18–34, adults living only with unrelated adult roommates, adults renting their home, adults living in poverty, and Hispanic adults." [CDC]

A leveling off among younger adults only - Drew DeSilver: "As one might expect, young adults are the most likely to be living the wireless-only lifestyle. Nearly two-thirds (65.7%) of 25- to 29-year-olds, 59.7% of 30- to 34-year-olds, and 53% of 18- to 24-year-olds live in wireless-only households, according to the center. However, those percentages are little changed — and in some cases even below — those recorded in the first half of 2013. However, as more people in older age brackets go wireless-only, the stereotype of cord-cutters as footloose Millennials is becoming less accurate. In the second half of 2010, more than half (52.5%) of people in wireless-only households were aged 18-34; in the most recent report, only 45.5% were." [Pew Research] 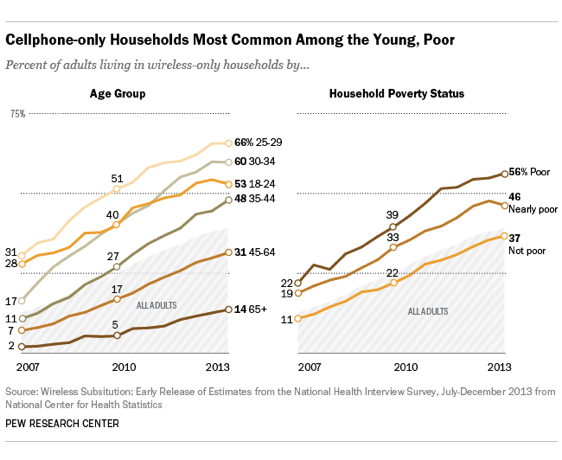 Majority now 'cell mostly' - More from Blumberg & Luke: "The potential for bias due to undercoverage is not the only threat to surveys conducted only on landline telephones. Researchers are also concerned that some people living in households with landlines cannot be reached on those landlines because they rely on wireless telephones for all or almost all of their calls...The respondent for the family was asked to consider all of the telephone calls his or her family receives and to report whether “all or almost all calls are received on cell phones, some are received on cell phones and some on regular phones, or very few or none are received on cell phones...During the second 6 months of 2013, about 44 million adults (18.3%) lived in wireless-mostly households." Thus, 57.4 percent of adults live in households that are either cell only (39.1 percent) or cell mostly (18.3 percent). [CDC]

What it means for the polls - The rising number of households without landlines is problematic mainly for survey houses that rely solely on automated phone calls that are banned by federal law from dialing mobile phones. Virtually all national pollsters that use live interviewers -- and most of their state level counterparts -- already call cell phones as part of their surveys. Both Gallup and the Pew Research Center, for example, now complete half of their interviews with respondents on their cellular phones. The most prolific robo pollsters, such as Public Policy Polling (D) and Rasmussen Reports, are attempting to compensate for the lack of cell-phone respondents by using panels of individuals who have volunteered to complete surveys online. [HuffPollster, previously, on how pollsters are adjusting]

AMERICANS SEE FEW PROSPECTS FOR MIDDLE EAST PEACE - Rachel Lienesch: "Tensions in Israel and Palestine remain high after the discovery of the bodies of three Israeli teens kidnapped in June sparked a new wave of violence in Israel and the Gaza Strip. According to a new YouGov poll, most Americans think the situation isn't likely to get better anytime soon. Exactly half of respondents said they believe violence in the Israeli-Palestinian conflict will increase in the next few years, compared to just 3 percent who said they believe violence there would decrease. Another 27 percent said they think the level of violence will stay about the same." [HuffPost]

AMERICANS SPLIT ON 2014 - Quinnipiac: "In the 2014 Congressional races, 46 percent of American voters want Republicans to win control of the U.S. Senate while 44 percent want Democratic control of the Senate. The same too-close-to-call 46 - 44 percent margin applies to control of the House of Representatives. American voters disapprove 73 - 18 percent of the job Republicans in Congress are doing and have a negative 36 - 52 percent opinion of the Republican Party. Voters disapprove 63 - 29 percent of the job Democrats in Congress are doing, and give the Democratic party a negative 41 - 49 percent favorability rating." [Quinnipiac]

CHARTING HOW BIRTH YEAR INFLUENCES POLITICAL VIEWS - Amanda Cox: "A new model of presidential voting suggests President Obama’s approval rating — currently in the low 40s — will inform not only the 2016 election, but also the election in 2076. The model, by researchers at Catalist, the Democratic data firm, and Columbia University, uses hundreds of thousands of survey responses and new statistical software to estimate how people’s preferences change at different stages of their lives. The model assumes generations of voters choose their team, Democrats or Republicans, based on their cumulative life experience — a 'running tally' of events. By using Gallup’s presidential approval rating as a proxy for those events, Yair Ghitza, chief scientist at Catalist, and Andrew Gelman, a political scientist and statistician at Columbia University, were able to estimate when political preferences are formed. Events at age 18 are about three times as powerful as those at age 40, according to the model....'It is important not to think about a single election or of a single defining political event,' Mr. Ghitza and Mr. Gelman write. 'Rather, generations appear to be formed through a prolonged period of presidential excellence.'” [NYT]

Interactive graphic - Nathan Yau: "Amanda Cox for the Upshot demonstrates the model in an interactive. Simply drag the slider to see how the political leanings of you and your birth cohort changed over time." [FlowingData] 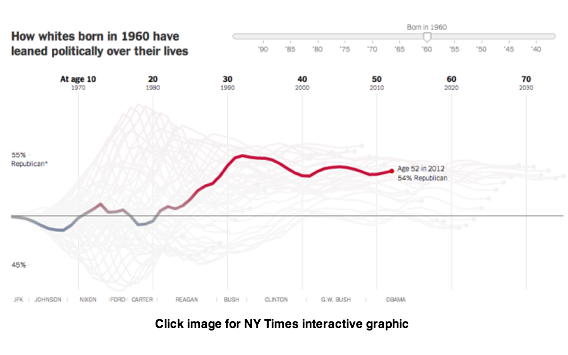 Will today's teenagers be more conservative? - David Leonhardt: "What seems permanent can become fleeting. And the Democratic Party, for all its strengths among Americans under 40, has some serious vulnerabilities, too. In the simplest terms, the Democrats control the White House (and, for now, the Senate) at a time when the country is struggling. Economic growth has been disappointing for almost 15 years now. Most Americans think this country is on the wrong track. Our foreign policy often seems messy and complex, at best. To Americans in their 20s and early 30s — the so-called millennials — many of these problems have their roots in George W. Bush’s presidency. But think about people who were born in 1998, the youngest eligible voters in the next presidential election. They are too young to remember much about the Bush years or the excitement surrounding the first Obama presidential campaign. They instead are coming of age with a Democratic president who often seems unable to fix the world’s problems." [NYT]

-Economic confidence has mostly leveled off since January. [Gallup]

-The number of registered Democrats in West Virginia has fallen below 50 percent for the first time since 1932. [WV MetroNews via @charlieNPR, @DKElections]

-The Kaiser Family Foundation's Drew Altman explains why the political heat on the ACA may be easing up. [WSJ]