After a hard day at work, you get home, take off your shoes, maybe even have a cold beer, sit on the couch, and pull out your two-inch by three-inch cell phone to watch a night of Netflix, right?

Lots of reporters, from CNN to USA Today, or the phone companies or even the General Counsel of the FCC, Sean Lev, all quote the Center for Disease Control's (CDC) statistics on 'wireless only' households. Lev states:

"More than a third of U.S. households are now wireless and the percent of adults between the ages of 25 and 29 living in wireless-only homes is 60 percent. Yes 6-0."

Really? Besides the fact that your wireless bill would be hundreds of dollars if you watched Netflix with HD regularly on your wireless devices, what's going on is simple -- the CDC's data is based only on residential phone calling. Period. It did not ask whether there is a wire in the home or how it is used. It doesn't matter if it is copper or fiber or coax wire. Moreover, the CDC doesn't survey businesses, especially small businesses, about whether they are 'wireless only." 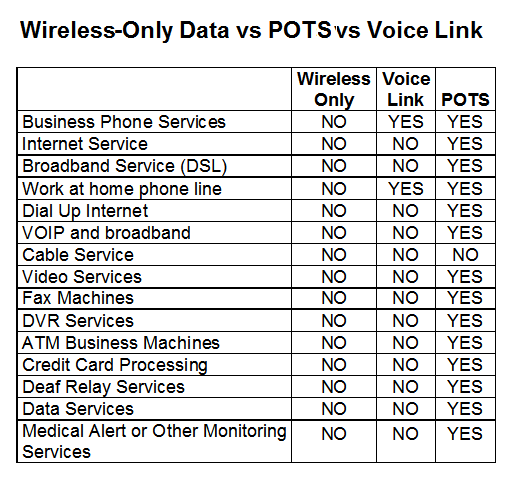 Doesn't "wireless only" mean -- no wires?

A few months back I was doing a talk at a law school and asked "How many students are wireless only?" I held up my cell phone and everyone raised their hands. But then I asked "How many have a wire into their home for broadband or Internet or cable?" -- 5 percent were left with their hands up -- not 60 percent as the FCC's Lev would say.

And this issue of services coming over a wire vs. voice-only phone calling is now a hot topic on Fire Island, New York. As we wrote, Verizon has stopped fixing the copper wires in parts of Fire Island as well as some areas in New Jersey that were out of service from Sandy. Instead of repairing or replacing the wires -- even though it was an emergency --- Verizon foisted Voice Link, a 1990s-style cellphone that can't do basic data applications, like alarm circuits or even dial-up Internet onto these customers -- and they are pissed.

And now we see that the CDC statistics are really the Voice Link of data. The customers who have data applications, like grandma's Life Alert, or a small business using an ATM machine or DSL service or anything over the wire that is not a residential voice call, has NOT been counted.

There's been no study of the diversity of applications over the wires, but when all the wires are included -- cable, phone, broadband, internet, and the data applications like alarm circuits, etc. are added, we estimate that only 5 to 10 percent of America is really 'wireless only' -- and probably less for small businesses.

This brings us to the rigging of America's landline accounting.

Those poor telcos -- 'Oh, we're losing lines' they exclaim. We agree that some people are dropping their expensive landline as the companies have continued to raise rates.

But here again, the data we are being given is garbage. The companies have decided to pull a massive shell game with the actual lines that are in service. The accounting does NOT include ALL lines; it only includes one category, known as 'switched' lines or 'TDM,' which overlaps with voice calling but can be different.

But most importantly, a regular phone line may not be counted once the landline is combined with another service -- even though it still uses the identical copper wire. Sometimes called "special access" (or "non-switched") these other lines are never discussed -- but includes all of the data lines, like DSL or can include alarm circuits in your house or ATM machines or even business lines which have packages of features.

Example -- there's a wire in your office. It is an old copper wire. When it is used for DSL, the line magically gets taken out of the original landline accounting even though it is the exact same wire. Or with AT&T's U-Verse, which is based entirely on the old copper, in place wire. It was once classified as a landline, but once the company attaches the exact same line to the U-Verse equipment, suddenly it is no longer considered a landline.

Talk about a shell game -- this means, that the telcos line accounting probably represents only 30 percent of the total lines in service. But don't believe me, here's the FCC data and the telco annual report data.

Oh there are caveats, but we have no idea how many lines are out there today. The FCC stopped requiring basic information about the types of lines in 2006 and the data currently offered is, well, rigged, as it doesn't give enough details. Neither do the companies' annual reports. And the state commissions also do not require basic data about lines.

Why Has the American Public Been Deceived? -

Verizon's CEO laid out the plan -- shut off all the copper wires and either push customers onto FiOS, their fiber-to-the-home service, or onto expensive wireless. Lowell Mac Adams Verizon Chairman & CEO, June 21, 2012, and former CEO of Verizon Wireless stated:

But the vision that I have is we are going into the copper plant areas and every place we have FiOS, we are going to kill the copper. We are going to just take it out of service and we are going to move those services onto FiOS. We have got parallel networks in way too many places now, so that is a pot of gold in my view.

And then in other areas that are more rural and more sparsely populated, we have got LTE built that will handle all of those services and so we are going to cut the copper off there. We are going to do it over wireless. So I am going to be really shrinking the amount of copper we have out there...

If the data shows everyone is already going wireless and if the copper wires are disappearing, then moving the agenda forward with biased data is the easiest way to simply fool the public into to giving the companies what they want.

As we wrote, AT&T has already petitioned the FCC to close down large areas of their territories and Verizon and AT&T have already got 25 states to believe their hype about VOIP, where they claim that the old copper wiring needs to be removed to make way for new technologies -- but no on seems to have questioned that AT&T's entire U-Verse networks, which uses VOIP in 22 states, is based on the old copper wires.

We note that there is even a 'Transition Task Force,'" headed by Sean Lev, to complete the deal and start trials to close down the networks. Sean Lev's previous job was as a lawyer and partner for Kellogg, Huber, Hansen, Todd, Evans & Figel. Their website states that the firm "is well known for representing Verizon and AT&T on a wide variety of regulatory, appellate, antitrust, litigation, and intellectual property matters."

As we've seen with Fire Island, customers aren't simply using the copper wire for voice phone calling but for data applications -- which are not part of the CDC's numbers, and can be hidden by the FCC's access line information.

America needs to know some things before there is any FCC transition or any state changes their laws to close down the networks.

And the issue of copper vs. fiber? A 'landline' is a fiber-optic service you paid for but never got. If Verizon, instead of closing down the wires, had actually upgraded the wire in your home or office to 1 gig speeds where you could choose your own cable or broadband or Internet or phone provider, do you really think customers wouldn't be demanding more lines? We'll come back to these issues in the next few articles.

Coda: Keep Your Phone Line; You'll be Richer, Healthier, and Less Stressed Out.

I leave you with this piece of data from the Center for Disease Control's wireless-only survey. If you keep your phone line you will smoke less, drink less, not be as 'stressed out' and have more money to pay for medical care when needed. This information is about as accurate as all of the other information presented by the CDC on phone service. 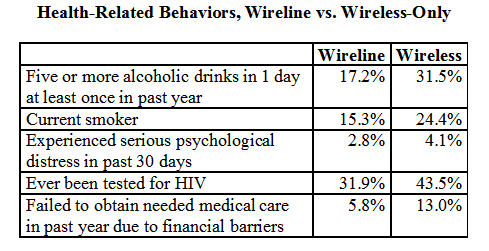