WASHINGTON - New polling conducted for the AFL-CIO and shared with The Huffington Post shows Wisconsin voters siding with the state workers, unions and protestors by large majorities and expressing net disapproval of Republican Governor Scott Walker

Both surveys began with questions about Walker's performance as governor and more general popularity ratings of Walker, Senate Democrats and other players on both sides of the controversy. The results of the two surveys on these questions were within sampling error of each other: Walker's approval rating is now net negative, with the disapproval rating reaching or slightly exceeding 50%. Meanwhile, the favorable ratings of "Democrats in the State Legislature" are slightly better and net positive (47% favorable, 38% unfavorable on the Saturday-Sunday sample).

The second survey proceeded next to questions focused more directly on the ongoing controversy. Respondents heard a list of people and groups involved in the controversy and were asked, for each one, if they agreed "with the positions they are taking in the current situation in the state capitol." The results presented in the following chart prepared by the pollsters show large majorities agreeing with "public employees" (67%), "protestors at the state capitol" (62%) and "unions" (59%) but far fewer agreeing with "Republicans in the Legislature" (48%) or Scott Walker (43% agree and 53% disagree). 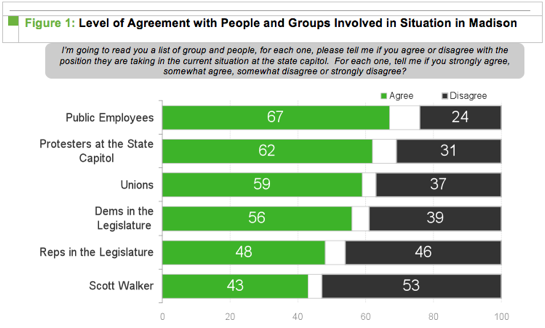 The first survey also included a "message testing" question that asked respondents to react to the following description of Walker's proposal:

As you may know, Governor Scott Walker recently announced a plan to limit most public employees' ability to negotiate their wages and benefits. The plan cuts pension and health care benefits for current public workers, and restricts new wage increases unless approved by a voter referendum. Contracts would be limited to one year, with wages frozen until a new contract is settled. In addition, Walker's plan also changes rules to require collective bargaining units to take annual votes to maintain certification as a union, stops employers from collecting union dues, and allows members of collective bargaining units to avoid paying dues. Law enforcement, fire employees and state troopers and inspectors would be exempt from the changes.


After hearing that description, 42% said they favor Walker's plan and 52% oppose it (24% say the favor it strongly, and 41% say they oppose it strongly).

Again, both surveys were sponsored by the AFL-CIO. As with any survey with partisan sponsorship, skepticism is in order. Data may have been released selectively, with less favorable results withheld. In the context of pre-election polling, partisan polls tend to skew in favor their sponsor by an average 3 percentage points and against their opponent by roughly the same amount.

In this case, however, the ratings of Walker and his budget and collective bargaining proposal are roughly comparable to an automated survey conducted in Wisconsin last week by WeAskAmerica, a for-profit subsidiary of Illinois Manufacturer's Association (an organization that has endorsed Republican candidates for state office in Illinois).

Update: Greenberg, Quinlan, Rosner Research has now posted their analysis and filled-in questionnaires for both surveys.