WASHINGTON -- Public employees around the country have become the nation's scapegoats for the rough economy, with many Republican politicians in recent months criticizing them as privileged, overpaid and underworked -- unlike their private sector counterparts. But in Wisconsin, Gov. Scott Walker (R) is now in hot water, facing an overwhelming backlash from the state's residents.

Wisconsin is facing a $137 million budget deficit. In order to close it, Walker wants to sharply curtail the collective bargaining rights of public employee unions, effectively preventing them from negotiating benefits, hours and working conditions. (They would, however, still be able to bargain over base wages, and Walker decided to exempt firefighters and police workers from his measure.) Public workers would also have to contribute more money toward pension and health insurance plans.

What has attracted the most attention is Walker's threat to call out the National Guard in order to respond to a walk-out or any resistance to his plan.

The governor has insisted that he's not targeting public employees.

"I'm just trying to balance my budget," Walker told The New York Times. "To those who say why didn't I negotiate on this? I don't have anything to negotiate with. We don't have anything to give. Like practically every other state in the country, we're broke. And it's time to pay up." The Huffington Post was unable to get a comment from him on Wednesday.

But some questioned whether his proposal is really financially necessary. The governor himself claims that Wisconsin can save $165 million by the end of next June simply by restructuring existing debt. Additionally, the share of corporate tax revenue funding the state government has fallen by half since 1981 and, according to Wisconsin Department of Revenue, two-thirds of corporations pay no taxes.

"I don't think there's any question that what Gov. Walker is trying to do here is not simply outrageous -- one of the worst things I've ever seen a Wisconsin governor do -- but he's just acting on a long-time corporate wish: the fantasy of destroying unions," former Wisconsin Democratic senator Russ Feingold told The Huffington Post in an interview on Tuesday. Feingold is launching a new political action committee called Progressives United, aimed at combating the influence of corporate power in politics.

Calling Walker's actions "big government at its worst," Feingold said that Republicans are trying to pit private workers against their public counterparts.

"This is an attempt to divide and conquer," he added. "What they did is tee up the rhetoric in the last few years about how public employees -- the notion is that somehow they're making huge amounts of money and they don't have to work very hard, and they're doing fine because their jobs and pensions are guaranteed while people in the private sector are suffering. Surely, there is enormous reason for people in the private sector to be frustrated -- and particularly working people who have had their jobs shipped overseas by trade agreements that have been backed by these big corporate interests that are benefiting from Citizens United. But the idea here on the right and the corporate side is to divide working people against each other, to turn private employees against public employees out of some kind of resentment."

Thousands of Wisconsin residents have showed up for rallies in Madison, with hundreds of Wisconsin residents signed up to testify on Tuesday against Walker's plan. Many of them ended up rolling out sleeping bags and sleeping in the building's rotunda overnight. With a GOP legislature on his side, Walker could get a vote as soon as Thursday. On Tuesday, the Republican co-chair of the Joint Finance Committee helped speed along the process by preventing a "citizen filibuster" and limiting the amount of time that residents had to speak, prompting protests from the people who were shut out of hearing without being heard.

Huffington Post blogger David Vines, a student at the University of Wisconsin, took a photo of the scene late last night: 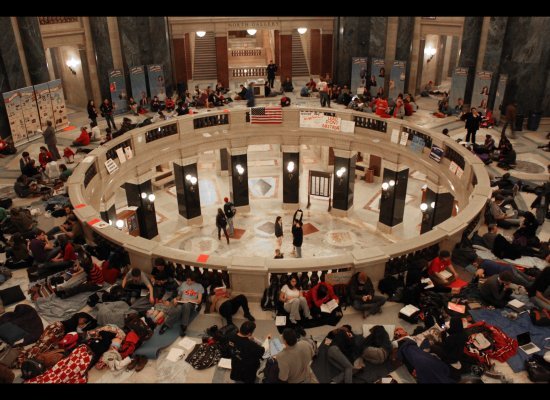 On Monday, hundreds of University of Wisconsin-Madison students and professors showed up at the state Capitol chanting "kill this bill" and carrying signs with messages such as "From Cairo to Madison Workers Unite." They also delivered valentines to Walker, asking him not to break their hearts. Rallies are expected to continue all week.

WATCH video of the rally at the Capitol on Tuesday, shot by an attendee:

Opposition to Walker's proposal has come not only from unions, but also veterans organizations and even the Green Bay Packers.

"As a publicly owned team we wouldn't have been able to win the Super Bowl without the support of our fans," wrote current and former members of the Packers in a statement. "It is the same dedication of our public workers every day that makes Wisconsin run. They are the teachers, nurses and child care workers who take care of us and our families. But now in an unprecedented political attack Governor Walker is trying to take away their right to have a voice and bargain at work."

There are roughly 175,000 public sector employees with union representation in Wisconsin. Of those, 39,000 are state employees and 106,000 are teachers.

UPDATE, 3:40 p.m.: In an interview with Fox News' Greta Van Susteren on Tuesday, Walker played down the number of protesters. Van Susteren observed that tens of thousands of residents have turned out to protest, saying, "I don't think Madison has seen a protest like that in quite some time." Walker replied, "In the end though, you're still talking about 5.5 million in the state. You're still talking about a couple of hundred thousand state and local government employees. So sure, you're going to have a few riled up about this, there's no doubt about it."

UPDATE, 5:00 p.m.: The AP reports that Republicans in the Wisconsin legislature plan to introduce significant revisions to Walker's bill.

UPDATE, 5:02 p.m.: On Tuesday, the University of Wisconsin Board of Regents wrote a letter to Walker expressing concern that his budget would remove UW-Madison from the UW system, which would in turn create unnecessary competition between the colleges:

We do not yet know what you have in mind for the University of Wisconsin System, but it has come to our attention that elements of your proposed 2011-13 biennial budget might remove UW-Madison from the UW System. As leaders of the UW System and long-time Wisconsinites who care deeply about the welfare of all UW campuses, we want to express strong concerns about this significant restructuring, especially without broad consultation and careful deliberation.

A Walker spokesman told the AP that more details will be released in the governor's budget next Tuesday.

UPDATE, 10:42 p.m.: Madison public schools were closed on Wednesday, because a large number of teachers and staff called in sick to protest Walker's bill.

UPDATE, 12/17: Madison public schools are closed for the second straight day, and some Milwaukee schools are also shut down. The University of Wisconsin is preparing for large protests, and on Wednesday, the provost sent out a message to the campus community (via HuffPost reader Thom Q.):

The University of Wisconsin-Madison is aware that classes may be disrupted tomorrow (Thursday, Feb. 17) as a result of reaction to the budget repair bill.

We value public debate and participation in the political process, however, we do not believe that this should come at the cost of a day of instruction for our student body. We are advising students to attend class, and faculty and staff to teach in the way they normally would. It is the responsibility of instructors to ensure that students' educational opportunities are preserved.

For additional guidance about political activities on campus, information about appropriate use of IT resources, please refer to my message of Monday evening:

If you have questions, please consult with the appropriate supervisor, instructor, or department chair.