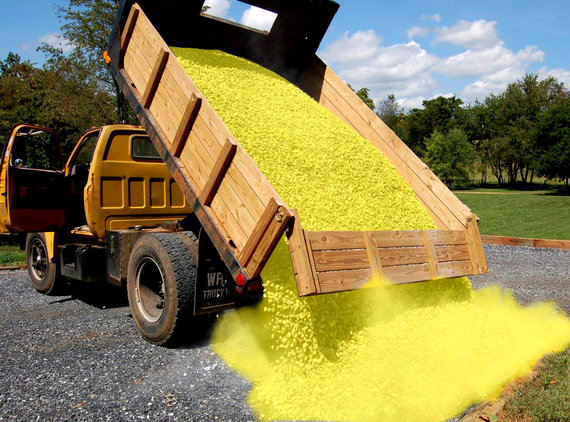 If you're planning on making a winter trip out to visit to The House on the Rock or just about anything else Wisconsin has to offer, don't be surprised if you catch a faint whiff of cheese on the highway... the roads will be covered in it.

If Wisconsin is known for anything, it's cheese. The residents proudly display their love of the dairy product on license plates, in their laws, and even on their heads.. now, thanks to a pilot program launched this month, the state will start using it on their roads. Turns out, cheese doesn't make a half bad de-icer.

"You want to use provolone or mozzarella," Jeffrey A. Tews, the fleet operations manager for the public works department, told the New York Times. "Those have the best salt content. You have to do practically nothing to it."

The use of cheese brine in keeping the roads safe is actually a few years old. In an effort to cut costs and find better alternatives to traditional road salt, a few small counties in the Midwest have been testing the use of cheese, and so far it's been a hit. One dairy company, F & A Dairy Products, donates most of its excess liquids to the local government. F&A saves over $20,000 in hauling and disposal costs in the deal, and it turns out that Polk County saves over $40,000 in rock salt costs. That's a lot of cheddar.

This isn't the first time that transportation departments have dabbled in strange alternatives to traditional salt. Sugar beet juice proved to be a bit too sticky, and discarded brewery grain just didn't have enough grip. Will cheese have a downside? That's yet to be seen, but officials have their eyes.. and most importantly, their noses, glued to the project.

Use Roadtrippers to plan your road trip through the cheese-paved roads of Wisconsin. Follow us on Facebook.