Nic Volker, 9, has an average of 100 seizures a day. "He used to have to wear a helmet all the time," says his mom, Amylynne Santiago Volker. "Because they'd just throw him right off his feet."

Now, Nic has learned to tell when they're coming on. "He knows when there's an aura, to lay down on the couch. That way he won't fall down," Volker says in a phone call with The Huffington Post on Thursday.

Still, the seizures have a huge effect on his life. Since being diagnosed last year with a type of intractable epilepsy known as Doose Syndrome, Nic's tried at least half a dozen medications, none of which seemed to help. His cognitive abilities have declined sharply. He had to stay back a year in school. He barely sleeps at night. But at least he's alive, Volker says. "It's scary, because one seizure can be fatal," she explains.

Now, Nic is taking an anti-seizure drug called felbatol (also known as felbamate), which "is one of the most dangerous ones out there," Volker says. That's because it can cause the fatal bone marrow disease aplastic anemia. But the Volkers opted to try it, because it "was the only one that doctors thought might control his seizures," Volker says.

It did, for about a year. "But now it's losing its efficacy," Volker says. Brain surgery, which works for some epileptics by removing the brain tissue that causes seizures, won't work for Nic. "His seizures come from multiple parts of his brain, so our doctors ruled that out right away," Volker says.

There is a drug, however, that's thought to be relatively safe and that could help Nic and others like him, but it's currently illegal in Wisconsin and throughout most of the U.S. That drug is cannabidiol, also known as CBD oil, a non-psychoactive (meaning it doesn't produce a "high") extract from the marijuana plant.

The cannabis extract was famously featured in the CNN documentary "Weed," which first aired in August. In the film, a 6-year-old Colorado girl named Charlotte Figi, who suffers from a rare seizure disorder, is shown benefiting from legal CBD oil. Animal studies and other anecdotal evidence back up advocates' claims that the drug is a viable treatment for some seizure disorders.

Volker said she watched "Weed" in August and began doing her own research into CBD oil. She knew there was a broader medical marijuana bill in the Wisconsin legislature, but didn't think it had a chance of passing. "And anyways, it didn't include people under 18," Volker said.

So this past fall, Volker met with her assemblyman, Rep. Robb Kahl (D-Monona), and told him about her son's situation. Kahl already knew a little about Nic: When the boy stayed back a year at Winnequah Elementary School, he ended up in first grade with Kahl's daughter.

"After meeting with Amylynne in the fall, we did our own digging on CBD oil and decided we had to do something," Kahl told HuffPost in a phone call this week.

So Kahl drafted a bill, AB 726, that would legalize cannabidiol to treat seizure disorders like Nic's. Kahl quickly sought a Republican co-sponsor for the bill, Rep. Scott Krug (R-Wisconsin Rapids). "As a member of the minority party you won't get anything through unless you have the support of the other side," Kahl explained.

He and Krug introduced the CBD oil extract bill in early February. It quickly picked up a number of co-sponsors on both sides of the aisle and was overwhelmingly approved by an Assembly committee last week. The Wisconsin Medical Society recently came out in support of it, too.

Kahl says he kept the bill's focus as narrow as possible in order to get it passed. Because any measure that allows for weed to be legally grown in Wisconsin would likely be struck down by conservative lawmakers, Kahl says Wisconsin's CBD oil would have to be imported if his bill passes. Importation would require federal approval, which the Food and Drug Administration has given elsewhere.

But whether the measure can pass into law this year is unclear. Wisconsin's legislative session is almost over, and the bill still has to be voted on in the House and Senate. "There's a lot of bills vying for that last amount of floor time," explains Gary Storck, co-founder of Is My Medicine Legal Yet, a nonprofit advocating for legal medical cannabis. "I'd say it's unlikely [that it will pass this year], but this bill has surprised me already so I wouldn't completely rule it out."

Also unclear is whether the state's Republican governor, Scott Walker, would sign it. Walker said recently that Wisconsin wasn't quite ready for full marijuana legalization, but a bill as specific as AB 726, that has bipartisan support like AB 726 does, might stand a chance. "Once it's made it that far, and it's so narrowly worded," Storck says. "I wouldn't rule it out that he could sign it."

Walker did not respond to a request for comment.

As for the Volkers, they will keep fighting for their son, whatever the cost. Amylynne Volker said she hasn't been able to work because taking care of Nic is a full-time job. The family's total medical costs for Nic are about $6 million, Volker says. "Insurance pays for some. But we'll be paying for a while. I mean, we'll be poor for the rest of our lives," she says. "But obviously he's worth it, for him to be alive. He's priceless." 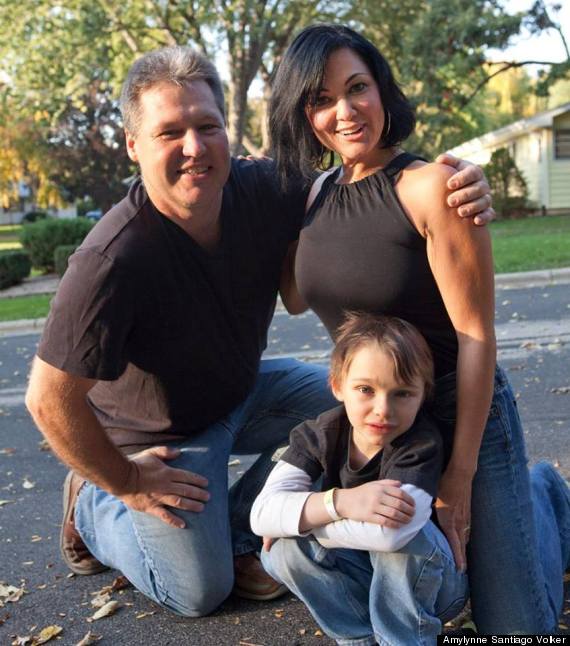 Amylynne Santiago Volker with her husband and her son, Nic, who suffers from intractable epilepsy.

Strains of Kaboom and Blue Mystic!
Nothern Lights Natural Rx
The two strains (the latter of which is pictured here) are among those most popular at Northern Lights Natural Rx, says co-owner Eva Woolhiser. But when it comes to edibles, she said customers will go for "anything."
The Ominously-Named 'Death Star' Strain!
Dank Colorado
Owner Justin Jones of Dank Colorado: "Our Death Star [strain] has been really popular."
And Blue Daddy and Mr. Pink Too!
Sean Barbas
"Our in house strains like Blue Daddy and Mr. Pink (pictured here) have been really popular,” Mile High Medical Cannabis store manager Sean Barbas said. "It’s been nuts”
'Euphoric' Cannabis Concentrate!
At The Health Center, owner Tiffany Goldman said a product called Shatter was the top choice among recreational customers before it sold out. Officially known as a cannabis concentrate, it's a form of hash and "according to most people it's more euphoric.
Blue Kudu Chocolate!
Bluekudu.com
The edible has been especially popular at Kine Mine, but customers shouldn't get in over their heads. "We’ve been warning people about the potency," CEO and founder Theran Snyder said.
Pop Rocks Candy Bars!
Incredibles
"Edibles have been flying off the shelves," Denver Kush owner Darin Smith said. "We’ve found particular success with the Incredibles Fireworks bar. It’s got chocolate mixed with pop rocks and the packaging is just great."
Weed Flowers!
Tim Cullen
“Cannabis flowers have been flying out the door," Evergreen Apothecary co-owner Tim Cullen said. "People have been waiting two hours for just two minutes in the store and couldn’t be happier for it.”
Weed Sodas!
AP
THC-infused sodas are displayed for sale in a cooler at The Clinic, a Denver-based marijuana dispensary with several outlets.
Something Called a TKO Bar, Whatever That Is!
Hank Borunda
"The TKO bar is most popular amongst patients," The Greener Side Owner Hank Borunda wrote in an email to HuffPost.
Here's What A Weed Menu Looks LIke!
AP
A recreational marijuana menu and price list sits on a counter at 3D Cannabis Center.
And Some Normal Bagged Weed!
Seth McConnell/The Denver Post via Getty Images)
Packages of marijuana labeled for recreational use are spread out on a counter at Northern Lights Cannabis Co in Edgewater, Colorado on January 1, 2014.
And Of Course, Just Plain, Old Weed Cigarettes!
AP
Different strains of marijuana are displayed for sale at The Clinic in Denver.