For five years, I've been traveling between Wisconsin and the Western Hemisphere's second-poorest country, Nicaragua. While writing about both places, I've witnessed the differences between developed and developing blur. Since Scott Walker became Wisconsin's governor in 2011, the state's household incomes have fallen, its public services have deteriorated, and suspected government corruption has regularly headlined the news. Some have suggested Wisconsin is becoming like a so-called Third World country. Now, presidential candidate Scott Walker wants to remake the entire US in Wisconsin's image.

On the surface, Wisconsin and Nicaragua share little except a population of roughly six million. But in recent years, both places have become plutocratic, one-party states. In Wisconsin, Republican gerrymandering, closed-door deals, and giveaways to Walker's wealthy donors have clouded the state's tradition of transparent government. At the same time in Nicaragua, President Daniel Ortega has consolidated power, controlling all three branches of government and much of the country's media. Both leaders have restricted opposition voices.

With his almost-unchallenged authority, Walker has turned Wisconsin into exhibit A of America's experiment with austerity. This has worsened long-term trends that have caused record inequality. According to the Wisconsin Budget Project, nearly one of every five dollars of income in the state goes to the wealthiest one percent of people. The result is a shrinking middle class. A 2015 Pew study shows that the middle-class in Wisconsin declined more than in any other state between 2000 and 2013.

As wages drop and expenses rise, more people are also falling into poverty. In 2013 (the most recent year data is available), Wisconsin's official poverty rate was 13.4 percent, up three percent from 2008. But more than 20% of children under five live in poverty. And Wisconsin has the highest African American unemployment rate in the nation, which contributes to more than a third of the state's African Americans being poor. This poverty translates into increasing hunger. About one in nine Wisconsin households lack reliable access to enough food. To make matters worse for low-income people, Walker has reduced earned-income tax credits and eroded the government safety net.

In contrast, Nicaragua's President Daniel Ortega loudly advocates for the poor. Though his efforts on their behalf are often more like political patronage than anti-poverty programs, poverty is slowly declining in Nicaragua, as it is in most countries of the global South. But centuries of Spanish and US imperialism have left the country with widespread human suffering. Roughly 41% of the country's people are poor--down from 48% in 2005. 17% are undernourished.

And undoubtedly, poverty wears a harsher face in Managua than it does in Milwaukee. In Nicaragua's capital, dirt-floored homes are commonplace and many neighborhoods don't have municipal water, electric, and sewer services. But both Managua and Milwaukee epitomize increasing economic segregation in urban areas around the globe. Poor residents of metro Milwaukee are more economically segregated than in any other large US metropolitan area. In Managua, the rich have abandoned the city center, where shantytowns sprawl along one of the most polluted lakes in the Americas.

The fear of crime that often accompanies such inequality also links Nicaragua and Wisconsin. Nicaragua is getting safer, though, while insecurity mounts in Wisconsin. Since 2010, the robbery rate has steadily increased in Wisconsin, surpassing the rate in Nicaragua. Recently, the number of homicides has skyrocketed, as well, with over one hundred murders already this year in Milwaukee alone. Milwaukee police Chief Edward Flynn cites Wisconsin's "absurdly weak" gun laws--which Scott Walker has further weakened--as one of the reasons. In contrast, Nicaragua's homicide rate has fallen sharply in recent years partly due to government seizure of thousands of illegal guns.

Outside the cities, both Wisconsin and Nicaragua are dotted with places emptying through emigration. More than a million Nicaraguans live abroad. Half of those leaving now are between twenty and thirty-four-years-old. Wisconsin towns are also losing their young people. The state consistently ranks high in net loss of residents to other states. As rural schools struggle to stay open due to Scott Walker's historic cuts to public education, this trend seems likely to worsen.

So is Wisconsin in fact becoming like a so-called Third World country? The answer depends in part on where you look. Infant mortality and poverty rates in some Wisconsin zip codes resemble those in Nicaragua. But on the whole, the state is still a privileged place. Wisconsinites benefit from US power by getting cheap Nicaraguan goods like coffee and sweatshop-made clothes. Wisconsin's wealthiest also wield more global influence than Nicaragua's elites, though their lifestyles are increasingly similar.

For most Wisconsinites, however, standards of living are stagnating or declining. This means they confront struggles similar to those of most Nicaraguans: How do I pay for food, transportation, health care, and education? How do I keep my family safe? How do I exercise my political voice in a system rigged for the rich?

Comparing Wisconsin and Nicaragua reveals that distinguishing between developed and developing countries is becoming less useful. As poverty grows in places like Wisconsin, poor communities around the world gain more in common with each other than they do with wealthy communities in their own countries, and vice versa. Increasingly, we live in a world of haves and have-nots no longer defined by national boundaries.

In Managua, I often visit a lakeside squatter community called Las Viudas--The Widows. When I stand below the sheet-metal shanties in piles of garbage on the lakeshore, I wish Scott Walker and the ghost of his hero Ronald Reagan could join me. Many people migrated to this community from the countryside in the chaotic aftermath of Reagan's Contra War, which killed over 30,000 and decimated Nicaragua's economy. Now, Walker wants to revive Reagan's hawkishness and reignite the free market fundamentalism that fueled it.

He should be careful what he wishes for. The Wisconsin he longs to leave looks more and more like the country his hero helped impoverish. 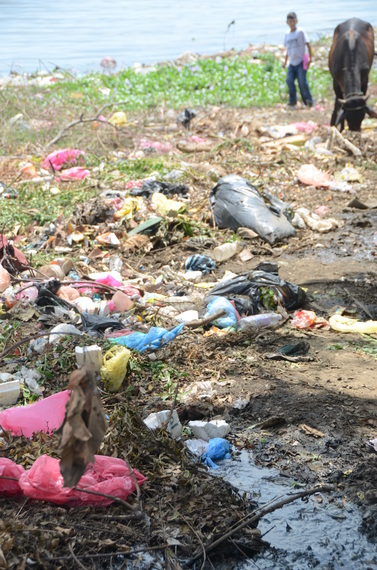