WASHINGTON -- As Republicans head out to vote in Wisconsin, Maryland and the District of Columbia, the final pre-election polls show former Massachusetts Gov. Mitt Romney poised to sweep all three contests and gain at least four out of five of all delegates chosen by Tuesday's vote.

The Republican race enters April having just passed a significant milestone. As of the Louisiana primary on March 27, GOP presidential primaries or first-round caucuses have been held in 29 states and five territories, enough to account for just over half (52 percent) of the 2,286 delegates who will attend the Republican convention in Tampa, Fla., in August.

Delegate counting is a tricky business. According to the Associated Press estimate, Romney reaches this milestone having won 572 delegates -- exactly half of the 1,144 needed to win the nomination -- followed by 272 for Rick Santorum, 135 for Newt Gingrich and 51 for Ron Paul. In reaching its estimate, AP looks at the technically unbound delegates who will eventually emerge from a multi-step selection process under way in eight caucus states and attempts to calculate the number of them each candidate will eventually win. AP also factors in any public endorsements made by the officially unbound party and elected officials selected as "automatic delegates." 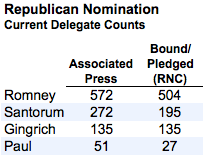 The official count produced by the Republican National Committee, which includes only formally bound delegates, gives Romney 504 delegates to 195 for Santorum, 135 for Gingrich and 27 for Paul.

Santorum's campaign and the pro-Santorum super PAC have disputed both estimates, claiming that he is on track to win 520 delegates. Their estimates assume that the candidate will gain ground by winning unpledged delegates selected in state conventions, sweep in the delegates pledged to Gingrich, and convince the Republican Party to allocate delegates from Florida and Arizona on a proportional basis.

As The Huffington Post's Jon Ward has reported, those highly optimistic projections are based on a number of shaky assumptions, including continuing momentum for Santorum at the grassroots level.

That momentum will likely take a significant hit on Tuesday as voters go to the polls in three primaries accounting for another 98 delegates -- 42 in Wisconsin, 37 in Maryland and 19 in the District of Columbia. All but three unbound automatic delegates in D.C. will be allocated on the basis of Tuesday's vote.

The 95 up-for-grabs delegates are divided into two categories. At-large delegates will be apportioned on a winner-take-all basis in all three contests (18 in Wisconsin, 13 in Maryland, 16 in D.C.). Another pool of delegates (24 each in Wisconsin and Maryland) will be chosen by congressional district and awarded to the winner of each respective district.

In Wisconsin, five recent polls show Romney with leads of between 7 and 10 percentage points, so he is a strong favorite to win those 18 at-large delegates. The NBC/Marist College poll finds Romney with large leads in Milwaukee and the heavily suburban counties surrounding it. Those areas account for most of the voters in four of Wisconsin's eight congressional districts. If Santorum takes the two more rural districts that went for Mike Huckabee four years ago, that leaves just two potentially up for grabs.

Maryland looks even better for Romney. Two late polls show him leading by margins of 17 and 25 percentage points. In 2008, John McCain defeated Huckabee in Maryland by 55 to 29 percent -- not far from where the most recent polls put Romney and Santorum today -- and won all of its delegates because he carried every county and all eight congressional districts. Nate Silver of The New York Times believes that Romney is likely to win all but one or two of Maryland's districts on Tuesday.

In D.C., where Santorum did not even qualify for the ballot, Romney is heavily favored to win all 16 delegates up for grabs.

Thus, at a minimum, Romney appears likely to win 80 of the 95 delegates up for grabs on Tuesday. Coupled with a symbolically powerful sweep of all three contests, the night should be sweet for the Romney campaign.