But protesters in Madison, filling up the Wisconsin state Capitol, would like to see him do more: Come out and join them.

"I heard Obama went to Portland, Ore. today. I wish he would have stopped here," said George Nygaard, a resident of LaCrosse who came out to the Capitol on Friday. "We would probably have had 100,000 people here today if he would have." 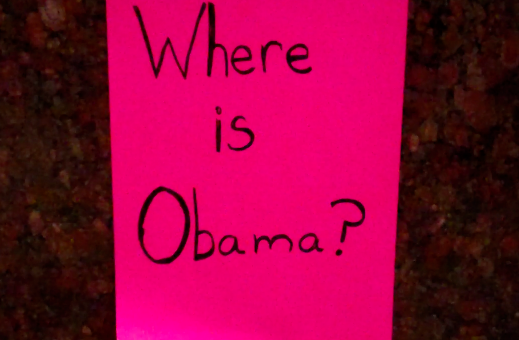 Every single person The Huffington Post interviewed in the Capitol named Obama as their top choice to come out to the rallies.

Karen and Lynn, two women who were taking a momentary break sitting on a staircase in the crowded Capitol, said they had come from Milwaukee to protest Walker's plan. They said not only would Obama bring energy to the movement, but they'd also like to see Secretary of State Hillary Clinton and Education Secretary Arne Duncan.

"He owes it to us," added Kathie Free, a retired Milwaukee public school social worker. "Obama was not put into office just by the big money. He was put into office by millions of poor and middle-class people who walk the neighborhoods, talking to neighbors, getting the votes, and that's how Obama got in, and he has to start remember how he got in. He'd better start working for the middle class and poor people."

Former Wisconsin senator Russ Feingold visited the protests today, marching with local firefighters and listening to some of the speeches during the noon rally held outside the capitol. When asked whether other politicians should be out in Madison, Feingold told The Huffington Post, "I can't imagine somebody who has supported labor and has the support of working people in the state wouldn't want to at least appear at some point. ... I know people are busy, but to me it was gratifying to see everyone working this hard against something that's really terribly wrong. It's very inspiring."