I WAS STANDING by the fire, ringed by smooth gray and golden stones, with smoke of sage and cedar floating into the New Mexican sky. The air was fragrant. 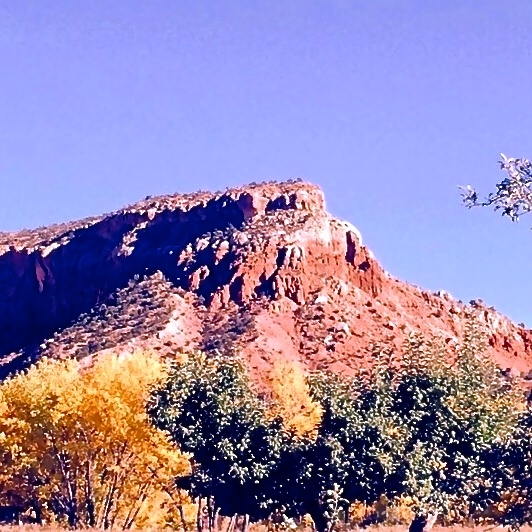 One of the Beautiful Mesas at Ghost Ranch

New Mexico is painted with colors of the earth--rust, umber, sand, all highlighted by a brilliant blue sky. Georgia O'Keeffe colors. And it was my interest in her that had first brought me here to Ghost Ranch. It had been some years since I had been stirred by the stories of O'Keeffe and her husband Alfred Stieglitz, either as individual artists or as a creative couple. It has not historically been a happy situation for couples in which both parties are writers or painters, artists of some sort. The women usually get the short end of the stick, taking care of their partners who need a buffer to keep the world away so they can do their work--to create in the highest, most glorious sense--when the female partners usually need this same protection. (I am part of a creative couple, but I won't get into that here.)

Georgia O'Keeffe might have suffered some of this same dynamic, but she also resisted it successfully. She gained the advantages of her famous husband (and lived with his indiscretions) but found a way to take care of herself and to live her life as she saw fit--with art and other artists, photographers, writers, and Native Americans in the New Mexican sun after she fled New York. Following Stieglitz's death, she truly lived as I say about many strong women like this--as a man, with the freedom men have to move throughout the world defined on their own terms. This is the life meant for all of us within our individual frameworks.

What is the meaning of life? It is to be ourselves, to walk our own paths on journeys that we devise, to live with integrity--to learn this, to be this, and then to touch O'Keeffe's same intense New Mexican sky, no matter where the sky finds us. In my mind, this--her life--was O'Keeffe's greatest work of art. The paintings that came out of her self-expression were what put her on this right track.

And so when I read about "Wisdom Sharing: A Deepening Retreat" being held at Ghost Ranch, where Gloria Steinem and Alice Walker were going to be, it took my breath away. These were women who meant something to me, who had led the enlightened way to girls and women--like me--who have lived in patriarchal societies and struggled every day. Freedom is a relative word, but we wanted more of it than we had. We wanted equality and respect, opportunity as well as economic power. We wanted to be masters of our destinies, and I'm not saying we didn't cosmically have the power to do this, but here on earth we had often been run into the ground by "religions" that exist as patriarchal fiefdoms. The Virgin has been put on a pedestal while the rest of the women have been demonized. Governments have historically and legally prevented us from being more than chattel to the men who basically owned us. And more obstacles that stood in our way. 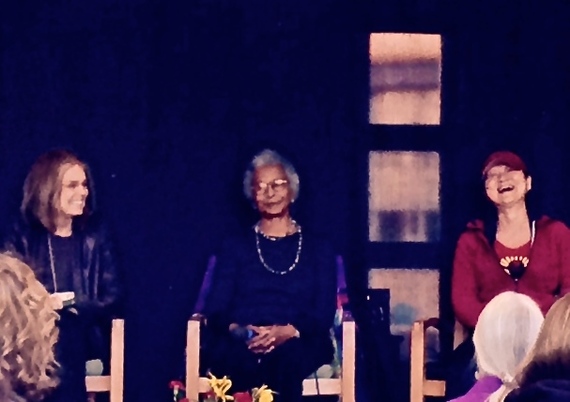 In case you need some reminding:

"In the early 18th century, the English critic Daniel Defoe denounced marriage as 'legalized prostitution.' English law dispossessed any woman who married, with the notable exception of England's queens. Women were not allowed to own property or land or to control their own assets. William Blackstone, a celebrated 18th century jurist, put it this way: 'By marriage, the very being or legal existence of a woman is suspended, or at least incorporated or consolidated into that of the husband, under whose wing, protection, or cover she performs everything.'

"...In France, the Napoleonic Code cast a draconian set of restrictions over a married woman's ability to engage in financial transactions or keep her own wages. This created difficulties for the Basque peoples, for example, where daughters often became the designated heiresses of family farms if they were considered more competent than the sons. Governments throughout Europe adopted the French's Napoleonic Code as their model for dispossessing women in marriage."

(From the website of the International Museum of Women, the above is excerpted from A Brief History of Marriage, Marriage Laws and Women's Financial Independence by Karen Offen).

THERE HAS BEEN much change since the days of Emilia Bassano Lanier, whom many believe was the Dark Lady of Shakespeare's Sonnets. She was the first woman in England to declare herself a poet, was a feminist, and was an ancestor of mine. And yet the old attitudes are carried in the collective consciousness that archives our past and by those who want women to stay in this subjugated position.

I saw this Wisdom Sharing Retreat as a chance for me to connect to myself in a rich way. That's been difficult since I've made the transition of moving back to the U.S. from a decade in France. I also saw the Retreat as an opportunity to be with, interact with, and generally bask in the transformational vibe of these women who have rocked our world. And to do this in the New Mexican countryside that is sacred to the tribes of Native Americans who come from here! Those of us who have seen the New Mexican light and have felt its creative pull can totally understand why O'Keeffe, Mabel Dodge Luhan, Ansel Adams, and others were drawn to these open spaces and stunning sky.

This fall had been my season for power and women, for powerful women, for the direction of leadership in our country, and for me personally. Ever since I read about the Retreat, I had been unwavering in my belief that I needed to be there for what I knew would be an extraordinary moment in time, the place to be in the world when energy conjoins and explodes into consciousness.

My week was even better than expected.

Take it from me, Alice Walker is someone to be reckoned with. She commanded our respect not just with her poetry and words, her acts of disruption to the status quo and for causes she believed in, but also by the pure, radical force of nature that she is. 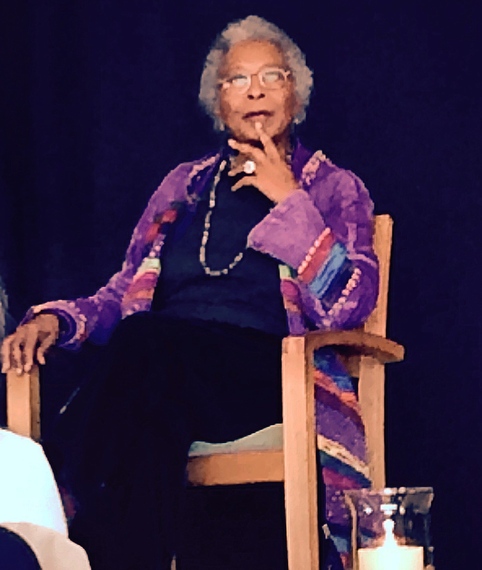 And Gloria Steinem is nothing less than a national treasure. She is a gorgeous 80-year-old whose face shows its age with grace, and who has such extensive experience and knowledge that she imparts with intellectual precision, openness, accessibility, and warmth. I want to touch my index finger to hers and for the frequencies in our bodies to be united so I can know what she knows and be able to help her carry on with this critical work. 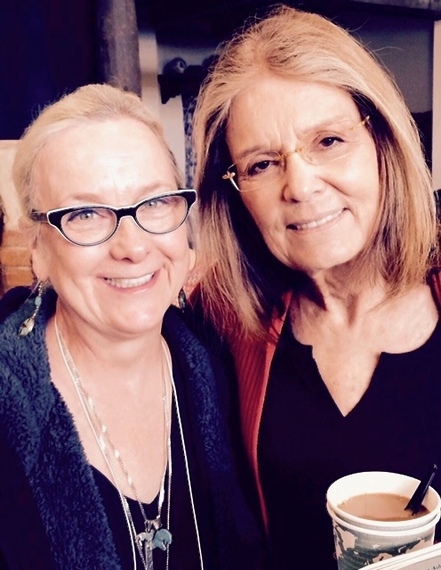 There was one other woman on this amazing bill, and that was Dr. Chung Hyun Kyung, a lay theologian of the Presbyterian Church of Korea. In her theology, she synthesizes the wisdom of the worldwide people's movements, spiritual legacies of Asian religious traditions, critical academic analysis, and the world of the arts. I hadn't heard of her before I arrived, but she was a ray of light and joy. A woman who as part of her history had been held and tortured in a repressive political atmosphere. And still she loved and believed and promoted the way of women. I am one of her believers now. 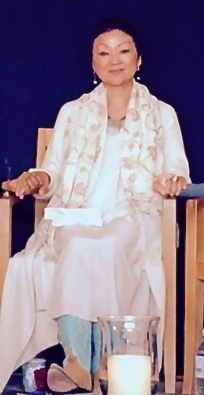 Activists all, these women have walked the walk and endured what might not have seemed possible. They have created a future for all of us, and for me personally, they've contributed to my own culture and consciousness and my own sense of who I am.

And the other leaders who were there to guide us through this week were Native American women, mothers and grandmothers, healers, chanters, singers, dancers, bearers of their history and ceremonies, bearers of their pain like we all are. They also gave us the gifts of their wisdom and created the circle of women that we were, equal and together, sisters in the world and grateful for the land and the sea, earth and sky, moon and stars--for the experiences that had made us. Their presence was critical in the spiritual synergy that bubbled up on this land where we stood together.

The first few lines of the the Haudenosaunee "Thanksgiving" Prayer, which we were led in every morning...

Today we have gathered and we see that the cycles of life continue. We have been given the duty to live in balance and harmony with each other and all living things. So now, we bring our minds together as one as we give greetings and thanks to each other as People.

Now our minds are one.

It was finally my turn to receive the safe travels blessing, and I stepped up in front of one of our teachers, Sarah Wells-Headbird, who was beautifully outfitted in her native dress. She poured cedar water in my hand, and I drank from it and sprinkled it about my head and shoulders, feeling that this was a baptism that would change my life. And I stepped around to the side of the smooth stones, and the fire's smoke curled around me and passed through me, and my own mother, grandmothers, sisters, friends, and aunts throughout the ages stood beside me and held my hands.

Beth Arnold is a journalist and author, an Exile Returned from Paris, who is currently working on an elegant and cool Internet start-up for gifting called CherryPic'd. We will begin beta testing in the next few weeks. For a sneak preview and to join our mailing list, go to CherryPicd.com.

Arnold is also building a community of Internet consciousness with her 28 days without the internet book that will be published soon. Please check out 28 days for more information and to sign-up to be updated.

To see more of Beth Arnold's writing, go to BethArnold.com.