Zach Braff's "Garden State" was released 10 years ago this summer, and it became an instant cultural touchstone. Written, produced, directed by and starring Braff, "Garden State" was a favorite for its soundtrack, its humble and relatable story and its cast, which featured Natalie Portman, Ian Holm and Peter Sarsgaard. Later, it would become a pariah for many of the same reasons.

Having not written or directed any films since "Garden State," Braff has finally made his follow-up with "Wish I Was Here." The film, which is out in limited release on July 18, stars Braff as Aiden, an actor married to Sarah (Kate Hudson). With a decade in between, one would hope that Braff's second feature would show a large amount of growth from his first. It doesn't: "Wish I Was Here" is littered with moments and themes that seem to make overt reference to "Garden State." Here are the 17 times (and we left one out so not spoil anything) "Wish I Was Here" directly references "Garden State."

1. Out of work actor

Andrew Largeman wasn't a successful actor in "Garden State," struggling for work as he waited tables at a fancy L.A. Vietnamese restaurant. In "Wish I Was Here," Aidan is also an out of work actor trying to live his dream in Los Angeles.

"Garden State" follows a guy who has become numb due to medication and unresolved family conflicts. "Wish I Was Here" is also about a guy who is not emotionally or mentally present for his family or himself (hence the title). Guess what? Both of those characters are played by Zach Braff.

In "Garden State" Andrew never learned how to swim and has a pretty difficult time jumping in the pool. In "Wish I Was Here," Aidan's daughter, Grace (Joey King), has the same fear. She also has a triumphant moment where she jumps into the pool, but luckily no one teases her. 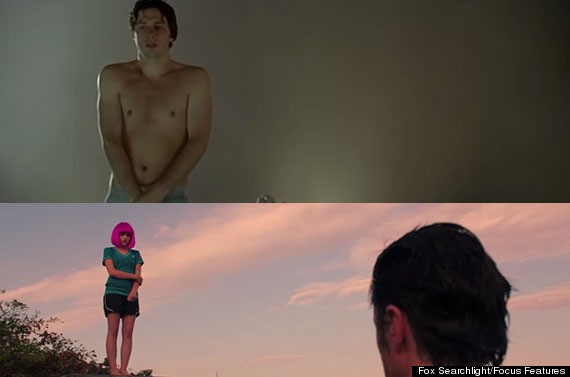 At the core of "Garden State" was a tense and uncomfortable relationship between Andrew and his father, played Ian Holm. A similar theme of father-son issues is at the center of "WIWH" as well, between Aidan and his brother, Noah (Josh Gad), and their father, played by Mandy Patinkin. 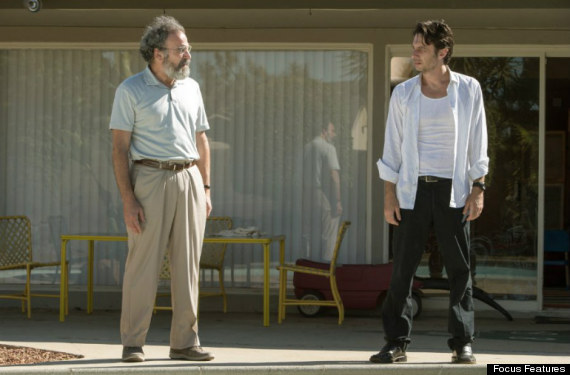 There are hints of Braff's Andrew voicing indifference for his Jewish religion in "Garden State," but in "Wish I Was Here" it is even more amplified to the point of Aidan lighting up a joint in the parking lot of his kids' Hebrew school. There's also a conversation that recalls the one Andrew and Sam have in "Garden State" about moveable walls in temple. Oh, and the school's Rabbi also is a subtle allusion to Ron Leibman's Dr. Cohen in "Garden State."

Although nothing like (or as great as) the screaming moment in "Garden State," Braff does have another one in "WIWH" with his two kids. 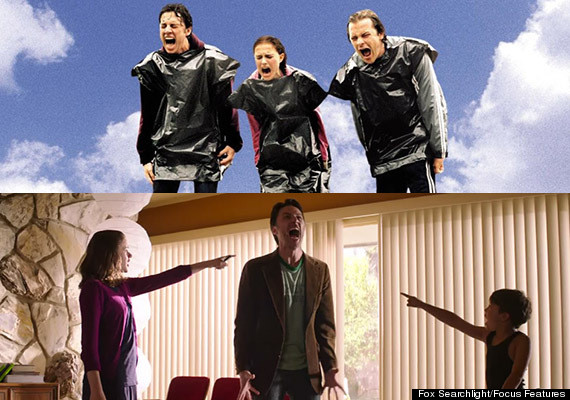 7. Three people looking out into the "infinite abyss"

Aidan, his daughter and son looking out onto the desert is pretty much the counterpart to Andrew, Sam and Mark looking out into the "infinite abyss" in "Garden State." 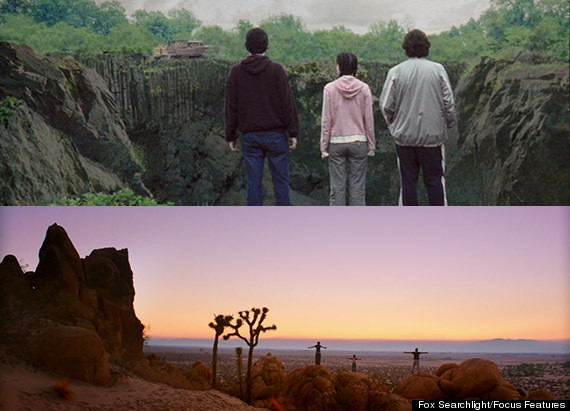 In "Garden State" Jim Parsons' Medieval Times employee Tim is a big Trekkie who even speaks Klingon. In "WIWH," Braff makes a little joke by having Aidan tell Parsons' Paul something about Captain Kirk that he didn't know. 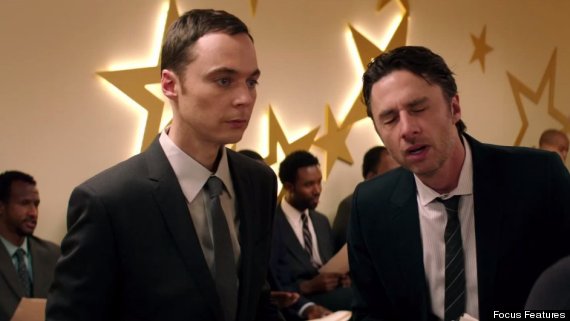 9. Kenny is now actually a dick

Remember Kenny, the guy who used to do coke lines off a urinal and became a cop in "Garden State"? He pulled over Andrew on his bike and pretended to act like a dick. In Braff's follow-up, Kenny's dream is realized when Michael Weston actually plays a dick: Jerry, Aidan's wife's gross coworker. 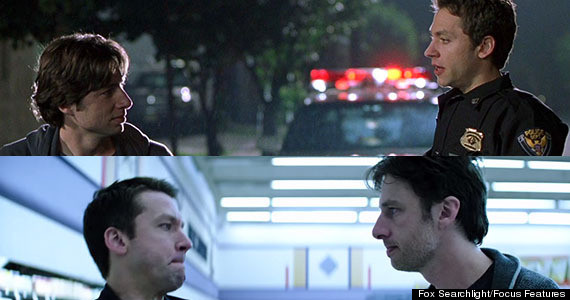 Zach Braff spends a lot of time in doctor's office waiting rooms, apparently. This time, it wasn't for his him though. 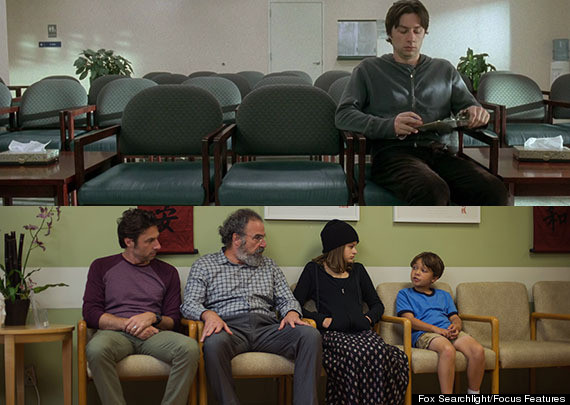 11. Express-yourself moment by the fire

There's a scene by a fire in "Wish I Was Here" that very strongly alludes to Natalie Portman's tap-dancing moment by the fire (also with a blanket) in "Garden State." 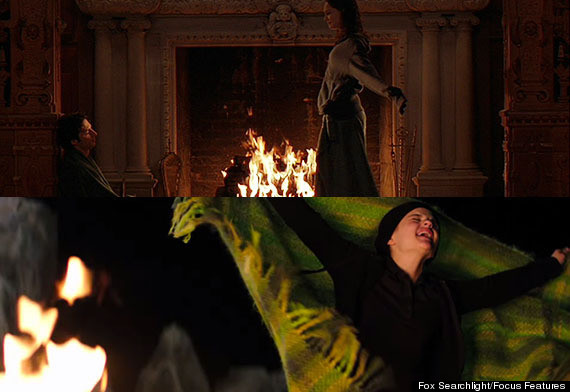 At some point, there's a mention of a pet cemetery in the backyard in "Wish I Was Here." We can't help but wonder just how many hamsters are buried there.

Dogs doing natural things that somehow turn out awkward yet funny is a common trope in both of Braff's films. Of course, there's the "Here comes the lipstick" moment in "Garden State," as well as when Sam's French Bulldog is awkwardly scratching his balls. In "WIWH," in the middle of a serious conversation between Aidan and his father, a dog pees to break the tension. 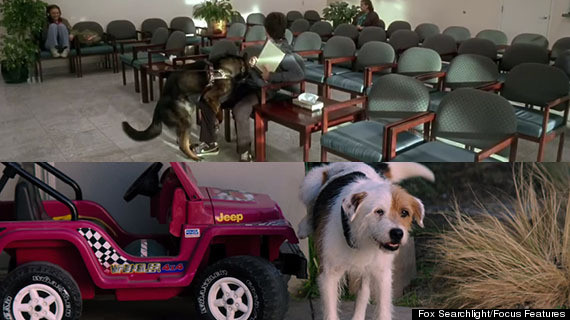 In "Garden State," Andrew has his first freeing moment when he takes his grandfather's vintage bike for a ride. The same kind of thing happens in "Wish I Was Here," but it's a little more ... ego boosting? (It's an Aston Martin.) 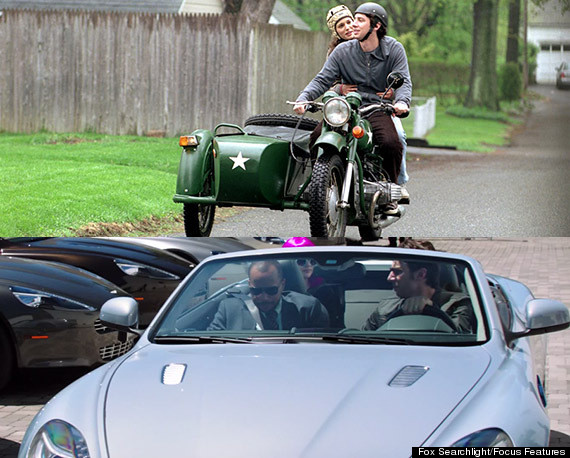 Nothing can touch "Caring Is Creepy" or "New Slang," of course, but The Shins make an appearance on another Braff-curated soundtrack with "So Now What."

Parson's knight armor is just so similar to the CGI fantasy space suit Braff wears in "Wish I Was Here." 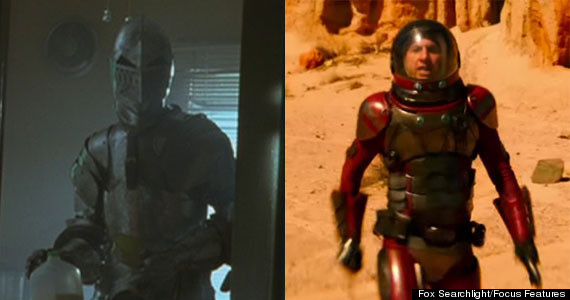 Maybe Jim Parsons was just made for another century. 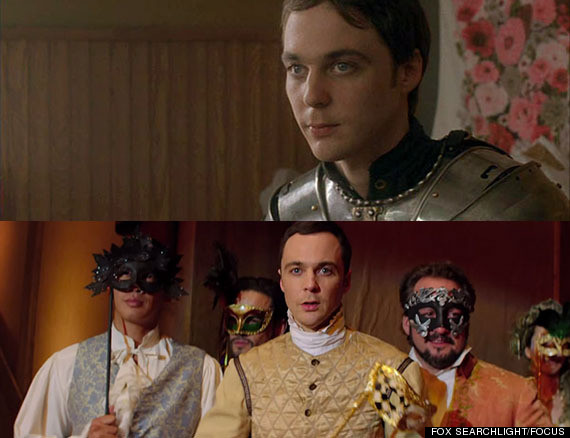 "Wish I Was Here" opens in select citites on July 18 and expands on July 23 and August 1.