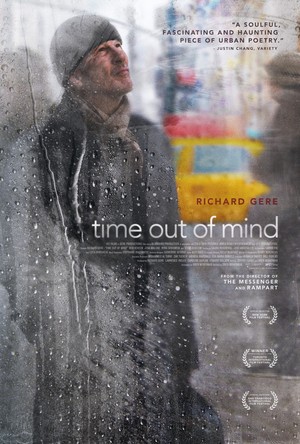 Movie buffs and Zero 2016 aficionados cheered on at E Street Cinema as Richard Gere entered the theater for a talk following the pre-release viewing of his upcoming movie, "Time Out Of Mind."

Gere, who stumbled upon the original narrative, adapted it for the screen with Director Oren Moverman.

The result is a realistic portrayal of life on the streets of New York City, with oddly beautiful images that convey both isolation and intimacy. The movie, featuring Gere in the leading role, is the life-like rendering of a disconnected man's struggle to rebuild his life after years living in homelessness.

"Time Out Of Mind" will undoubtedly fare well with audiences when it is released in September because it casts an original light on the phenomenon of homelessness in the Big Apple.

It does not pander or exploit homelessness. It has no winks at the audience. There are no quotable one-liners. It's just the personal narrative of a man on the street trying to survive and manage his mental health as the system moves away from him like a moving target, making each new attempt to rebuild seemingly harder than the last.

Gere shared that the shoestring budget somehow helped the crew maintain this realism during the shoot, which only took 21 days.

Attempts to shoot remotely in order to preserve the natural quality of New York street life gave birth to angles that accentuate Gere's plight. However, much like Gere himself, the movie conveys a sense of hope in the end.

Gere became involved in homelessness several years ago, spending time in shelters and connecting with the residents there. As the Producer of the film, Gere has also indicated he wants to make "Time Out of Mind" available to homelessness nonprofits to use for fundraising purposes.

As Nan highlighted during a plenary session the next day, the stakes are high this year for advocates, service providers, and allies like Gere, if the Zero 2016 goal to end veteran and chronic homelessness in the country is to materialize. In short, we'll need all the support we can get!

Beyond the glamorous backdrop of the movie screening, the conference was a huge success. Amid groundbreaking best-practice presentations by seasoned practitioners from across the country, Roman and guests like Mayor Muriel Bowser, USICH Executive Director Matthew Doherty, and VA Secretary Bob McDonald moved attendees to reach for the stars and end homelessness.