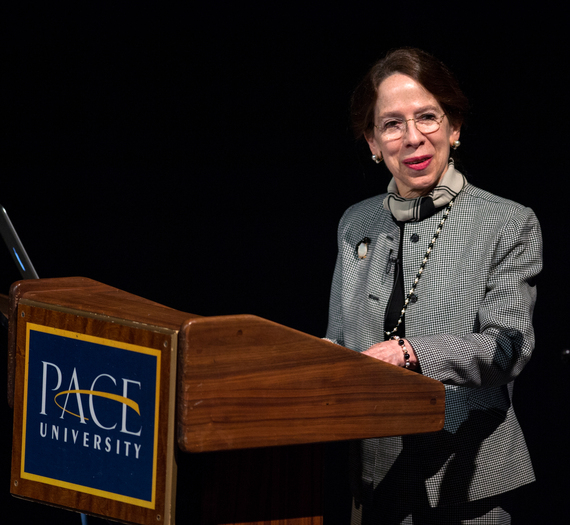 The incomparable Janetta Rebold Benton will begin a new lecture series called Architectural Masterpieces at the Michael Schimmel Center for the Arts at Pace University in Manhattan in February. Having been fortunate enough to see previous lectures, I strongly encourage readers to attend as the experience is extraordinary. During these lectures, this remarkable scholar takes you on a journey deep into the subject matter with great insight, erudition and, delightfully, a strong sense of humor. From the back of the room you can see her eyes sparkle with mischief as she lets you in on little known gossip about an artist or playfully points out imperfections or naughty content in the works being examined. The time flies by and too soon you know the lecture is over when you hear her conclusion, always rendered in rhyming couplets.

For those who know enough to give themselves a delightful treat, there is a luncheon with Dr. Benton following the lectures. At one I attended, we sat at several communal tables which seated eight to ten people apiece. As we dined (on a very fine selection of dishes) Dr. Benton asked us to address the question: "Which is superior, sculpture or painting?" Of course the answer was beside the point. It was the discussion of differing opinions that was of interest. The group at my table had a lively debate which was enjoyed immensely by all. Dr. Benton then made the whole room work together as each table had to tell the others what answer they had chosen and why. There was a very pleasant sense of community there as the animated conversation bounced around the room (while we enjoyed a particularly delicious dessert) with Dr. Benton directing as our professor, making for a memorable time. It made me feel envious of her students at Pace University and when we sat together for a private conversation after the luncheon, I asked about her students.

Ellen Dobbyn-Blackmore: When you ask your students the question, "how much does it matter how well made it [art] is"... how do they answer?

Janetta Rebold Benton: You get different opinions on that. I have a series of questions that I ask them right at the beginning of the course I'm teaching now. It's an overall survey. Usually I'm the first person who's ever spoken to them about Art History. It's a series of questions where there's no right or wrong. Similar to what I did today here in the lecture. It's the beginning of the course so we can't discuss anything since we have no background. So I ask them to please think about these things as we go through the information. I ask them, is beauty a requirement for art? And I touched on that today.

JRB: I think there must be an aesthetic component for it to qualify as art. Then you can take that further. Why do people want to be called artists? Why do we want to consider it art? That's a good thing and people want that. There's no requirement to call yourself an artist. It's not like being a medical doctor or other professional.

EDB: I can't remember who it was I was speaking to that said great art isn't always beautiful. Sometimes it depicts the grotesque. And he spoke of the idea of the sublime, instead of the beautiful. It may not be beautiful in the sense that you think of beauty but it's speaking volumes.

JRB: Must it convey an emotion? Must it elicit an emotion? That was the question that I asked that followed it. And the general consensus is that it must produce an emotion or make you feel something.

EDB: I wanted to talk to you about your love of animals... do you do other things besides Adopt a Dog?

JRB: The very first book I wrote was The Medieval Menagerie, about animals in the art of the Middle Ages. The first lecture I gave at the Smithsonian in Washington, D.C. was based on that book. I think they were testing me out. They had me come for one, one hour lecture. Apparently I passed the test because I've been going back doing all day seminars for them ever since. It's been two decades and I have another coming up this spring on French art and architecture. Yes, I like animals. I grew up with animals. We always had pets. I remember coming home from college at one point and they had put ducks in my room without ever telling me. We did not live on a farm. This was in Arlington, Virginia. There were always animals. Now we only have two cats but we're thinking about expanding that.

EDB: When you go to Europe, do you go on those riverboat cruises?

EDB: What did you do about that?

JRB: We rocked the boat off the sandbar eventually. The one I just did at the end of September was a Smithsonian trip called The Rivieras of Italy, France and Spain. It was a seven night cruise that started in Rome and ended in Barcelona.

EDB: What art did you see?

JRB: My lectures are supposed to relate to the places we're going to visit. We spent most of the time in Italy so my lectures focused on Italian art and architecture. The first one was about the Middle Ages and the second one was on the Renaissance... I have four more coming up and thanks to modern technology, if it conflicts with my teaching schedule here, I can put my class online. We're actually encouraged to use technology in our teaching.

EDB: You make all your own clothes, don't you?

JRB: Yes. I do. I buy fabric when I travel. This is from a trip to Spain many years ago. I design and make all my own clothing. It's my hobby.

EDB: You started out as an artist and then went into Art History.

JRB: As an undergraduate I took a degree in Fine Arts at Cornell. I basically decided that the persona that one needs to cultivate was not for me. I was a good student, number one in my class, but I went to graduate school and got a master's and then a Ph.D. in Art History.

JRB: No, I did but it wasn't for me. There were people in my class who went with Andy Warhol and joined the Factory. People from my own group became famous. Susan Rothenberg was a year ahead of me. She was probably the best known.

EDB: You have such an appreciation of technique...

JRB: I do. I wrote a book on that called How it is Done and it certainly derived from that. I was trained that way.

EDB: What discipline were you trained in?

JRB: Graphics. I was a printmaker. Lithography, etching, engraving, silk-screening...

EDB: Do you have any pieces?

JRB: Yes. They hang in my house. At the beginning of the summer I started working again on some pictures I did forty years ago. They're hanging up all around and I did them in pencil. They had faded to the point of being barely visible so I took them out and re-did some of them. I took the old lithographs and added some color.

EDB: How did that make you feel?

EDB: I was thinking that attention to detail has a lot to do with you making your own clothes.

EDB: Are you meticulous in every aspect of your life?

An aside: I looked at a seam on Dr. Benton's jacket and marveled at how perfectly the tiny pattern was matched. The discussion continued...

JRB: [How well something is made] is of diminished importance. We've gone so far that today, there are works hanging in museums, that the paint is flaking and cracking. Now that we paint in acrylic, polymer and synthetic paint, they haven't been around long enough for people to know how well they're actually going to hold up in the future and that's a legitimate concern. It's a question I've posed to my students: how important is craftsmanship in valuing a work of art? I don't mean in a monetary sense. If something is made well and perfectly crafted from a technical standpoint, is it better in the broadest sense of better than something that is not? Do you value the technical aspect or the idea? Where do you draw the line? There is this change in attitude over the years and it goes along with this idea of creativity and innovation. Back in the Middle Ages you weren't expected to do something totally new and different. If you were working in Europe, you were probably working for the church, on commission, and your picture of the Madonna and Child had to be sufficiently similar to other images of the Madonna and Child so that your audience immediately recognized it and it had to tell a narrative. If it didn't look like other stories, they wouldn't know what it was.

To learn more about this fascinating, funny, encyclopedic scholar, visit her website and be sure to attend her lectures in February at the Schimmel Center.