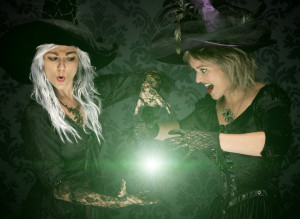 Witches are sexy and cool.

I know that this is not exactly groundbreaking social commentary. It's not like I woke up this morning and decided, via some kind of memetic revelatory inspiration, that witches are culturally hot. In fact my horror-loving friends might reasonably ask: when did witches ever stop being hot?

They've always been hot. The Craft plays as well today as when Neve Cambpell first got rid of those scars. The gals in MacBeth still give me chills. Like the three old hags in Neil Gaiman's Stardust, witches have always been out there, waiting for some spark of dark magic to once again ignite their intellectual and sexual appeal.

But who knew that the most current, the most daring, indeed the most savagely enjoyable spark, would come from the same guys who gave us Will Schuester and a bunch of high school kids using pop songs as public service announcements? The same folks who made Glee are now bringing us Jessica Lange and Angela Basset as two bad-ass witches who are hell-bent (literally, I guess) on taking themselves and the rest of New Orleans apart.

Again, to say that this season's American Horror Story is amazing is also not a newsflash. It has graced the cover of all sorts of magazines and climbed aboard numerous top 10 lists. But as a horror enthusiast, and as a lover of zombies, I find my allegiance being undeniably tugged. As if drawn by a dangerous kiss on my television ear, I have migrated from the dour barbed wire of The Walking Dead to the gothic steam of Mrs. Robideaux's School for Exceptional Young Ladies.

And, as Glee did so well, American Horror Story: Coven is utilizing both camp and shock-value to make clear some pretty cool themes. Feminism, social status, and intense sexuality all play prominent roles in the complex story line.

But I'd like to take it all a step further. I'd like to argue that the current transformation from zombie to witch as the go-to horror storyboard is representative of a nuanced shift in our ever-changing sense of collective self-identity.

Zombies are, well...less. They are lacking, by definition. The main danger that zombies pose to humans has always been the manner in which zombies cause us to react to them. Do we shoot the zombie in front of us, thus wasting precious ammo and descending to the barbarism of the zombie landscape, or do we simply walk slightly faster in the other direction as the un-dead shuffle after us with all their absent enthusiasm? The choice is ours, of course, and zombies could care less.

The point is this:

Witches, at least in their current pop culture incarnations, are all about feeling special. That's the exact opposite of what zombies engender. While the undead make me feel crappy and boring -- a zombie finds nothing particularly interesting about MY guts -- witches won't even waste their time on me unless I am in fact worth it.

That's even different from vampires. Vampires might trick me into thinking that I'm special, but that's just a ruse so that they can zero in on my jugular.

But in order to matter to a witch, you have to matter. I have to admit that in the campy and messed up world of this season's American Horror Story, I'd feel bereft and left out if the various enchantresses didn't at least consider me. That'd be like not getting picked on the magical kickball team.

With these witches? Hell, I wanna play.

So, zombies are the monsters we run towards when we confront our disconnection. When we're stuck in traffic behind faceless cars, when we're assaulted by infections that lack both malice and motive, when we use drones to fight our wars, we think more often of zombies.

They are the ultimate in the impersonal.

But the current and growing fascination with witches suggest that we feel anything but impersonal. Is it possible that we have finally begun to reconcile our post-modern fears of losing human touch? (Spike Jonze's new film Her speaks well to this possible reconciliation.)

Witches require us to celebrate our humanity.

I will always love zombies, but for now I am under the witch's spell. And, after all, the zombies won't care. That's the beauty of zombies.