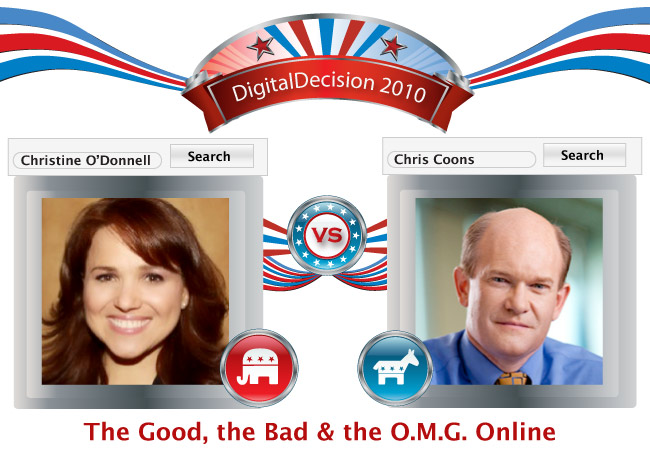 Thinking about publicly divulging your earlier dabblings in satanic rituals? Or considering an ironic, fringe title for an article in your college newspaper? Take a lesson from the Delaware Senate race. Everything you say or do in the public sphere can and will find its way to the Web's megaphone. And it can bite you.

This week's side-by-side comparison of the online reputations of two contending candidates, Christine O'Donnell and Chris Coons, offers its fair share of flag-raising results. Let's dig in to a few of the more interesting scores.

Similarly, an artifact from Coons' youth is impacting his current persona, on and offline. "Chris Coons: The Making of a Bearded Marxist," an article written by the politician in his college years, has been digitized, discovered and disseminated. Regardless of whether or not Coons has Marxist leanings, this association creates a tone for his search results that can handicap his campaign.

Control: O'Donnell 1, Coons 4
Ever heard of cyber-squatting? Where someone takes your website or your name's URL and sets up shop? The first page of O'Donnell's search results reveal such an instance. An anti-O'Donnell campaigner has gone online and captured O'Donnell's '08 campaign page, using the site to reveal alleged hypocrisies and blemishes in O'Donnell's political and personal life.

Beyond these guerilla tactics, O'Donnell is also up against the brute force of online humor. Funny videos mocking people of power have a way of going viral. Especially when they're as mainstream as Saturday Night Live.

Campaign Coons on the other hand isn't up against the same hurdles as O'Donnell. His web search checklist is in proper order: Chris Coons campaign page, Wikipedia entry, image results, recent and relevant political news, Facebook. He's got a high level of control to prevent the unflattering "Bearded Marxist" talk from taking over and taking rank.

Message Match: O'Donnell 1, Coons 3
Just as Coons doesn't want to be known as a bearded Marxist, O'Donnell would rather not be known for witchcraft. But a look at O'Donnell's predictive search terms and a measure of her search results makes clear--she is not known for her tax plan or teacher reform, she's known for her witching ways.

Stay tuned later this week for O'Donnell vs Coons updates and our Top 5 Worst online errs...O'Donnell, in no way are you alone out there!