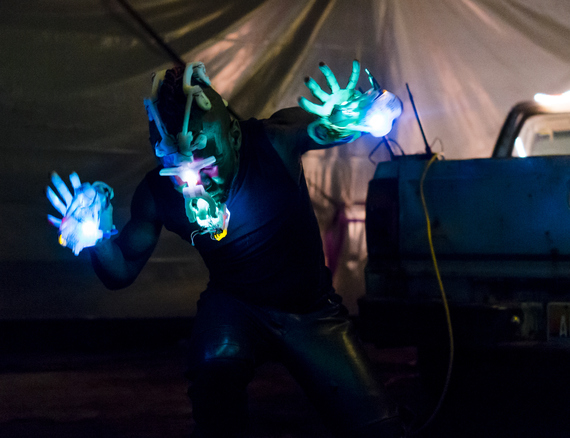 Onyx Ashanti performing in his exo-voice.

Often, it begins in the dark. When the LEDs light up -- in red, yellow, blue, green, and purple -- the face inside the mask becomes faintly perceptible. But before the gathering crowd can identify the man, the music comes on. It comes in swells and ribbons. It comes as a devouring chaos, as a frenetic torrent of notes and phrases, looping back into new motifs of sound.

Onyx Ashanti invented the instrument he plays, which he calls the exo-voice. He also printed it with a 3D printer he built himself. It consists of a headpiece and two hand units. The crown apparatus had twin rails that fit on either side of Ashanti's mohawk, which he has grown long and twists, wrapping the twists in various colors of thread. The rails rest on electrode pads positioned over various parts of the skull, which he says allow for transcranial direct current stimulation. The translucent 3D-printed rails wrap over his forehead, rest on the bridge of his nose, and finally terminate in a pressure-sensitive mouth-piece that functions somewhat like a wind instrument. Lockable straps around the back of the hand keep the keys close to his fingertips.

All three pieces connect wirelessly through cast-off routers he has repurposed, which feed into his computer and then generate sound out through whatever speaker or speaker systems he chooses. Depending on the performance, his amplification could consist of an old boom box or a state-of-the-art concert hall system.

In addition to being able to key notes with the fingers in a manner similar to playing a saxophone or clarinet, Ashanti has added multiple gestural controls, triggering pitch modulators on three different spatial axes. He can also gesture the instrument to loop the notes and then manipulate the layers of loops. For all intents and purposes, when he is performing, Ashanti is simultaneously cyborg, saxophone, theremin, DJ, dancer, producer and synthesizer.

Ashanti has performed all over the globe in packed clubs and concert halls, at conferences and on street corners. He both spoke and played at the 2015 TEDActive Conference.

Music isn't the only function of the exo-voice, as he calls the instrument. Recently, Ashanti programmed the hand-units and the mouthpiece to function as keyboards and mouses. He can operate his computer and type with the exo-voice's hand-units.

Ashanti doesn't come from the tech world. He was a conventional saxophonist and woodwind player until he went electronic and started using a kind of synthesizer modeled on the sax called a wind controller in 1993. His initial motivation for the exo-voice was just to be able to move his hands and head freely while he was performing instead of having them locked onto the instrument.

In 2011, he began learning to program over the Internet and in Meetups.

"It's not that I have some kind of natural knack for computers; it's just that I have a desire to be able to express myself with them," Ashanti says.

Three months after starting to program, he completed the first iteration of his personalized instrument, which he called the Beatjazz Controller. It was made of "bottlecaps, cardboard and glue stick, and all this stuff," he says. Shortly thereafter, he discovered 3D printing at a Maker Fair in New York. Using funds he raised with an Indiegogo campaign, he bought one of Adrian Bowyer's RepRap kits, also over Indiegogo.

"You print the first piece and it's just a piece. You print 80 percent of the pieces and it's still kind of [meaningless]. It isn't until you print the last pieces that you're like 'Holy shit. It was in the computer and now it's in my fucking hand.'"

After over two decades as a professional musician, it was easy for Ashanti to turn even the earliest models of the beatjazz controller/exo-voice into unforgettable art.

"People have approached me [to buy the instrument], ever since I created it," Ashanti says.

The exo-voice, however, is not for sale at Guitar Center, on Amazon, or on his website.

Ashanti recently moved to Detroit, a city he and other artists believe is more focused on spiritual/creative capital rather than the fiscal. He sleeps on an air mattress in a small bedroom that serves as his living space, studio, and workshop. The Mississippi-native recently moved from Berlin -- over the past two decades Ashanti has lived in Atlanta, San Francisco, Amsterdam, and London as well -- and survived a five-month-long Michigan winter on a total of $50. He ate rice liberally coated with spirulina every day, sometimes not venturing out for weeks at a time, furiously continuing to develop technology to provide for as many of his needs as possible. Ashanti recently conceived, designed, and printed his own sandals, which he calls "footware," and promises to follow up with total "bodyware." He obtains materials through skillshares, trades, street-performing, and concert performances.

"I look at money as a spell," he says. "It's a purely mental construct. [If] what I do is about the acquisition of money, then I start molding [my work] based on that whole modality. It becomes about getting the money and warehousing the money and what you're going to spend the money on." He says that would subvert the energy he could otherwise use for imagination into crass business development.

"The reason why the wind controller didn't become a mainstream instrument [is] because it's an abstraction of a sax," he says. That instrument neither creates the kind of beautiful tone a saxophone produces nor developed its own distinct functions. Ashanti wants his exo-voice to be a continually evolving protocol.

"I moved to the open-source thing early in the process," a philosophic Ashanti explains. "I'm more interested in what this kind of thing means. I look at the idea as a lifeform. The beatjazz controller, the exo-voice, these are just expressions of the idea."

Ashanti wonders: "Wouldn't it be interesting if it became less about buying it and more about teaching people to make it, so you would have [peers] ... who have built the 3D printer and printed their exo-voice, [and in doing so learn] ... how to program and iterate on their own?"

A fairly detailed description and schematics of his earlier beatjazz controller were published in Make: Magazine. Now Ashanti plans to release a fresh set of plans for the exo-voice soon. People across the globe are now producing their own versions of the instrument. "There are other devices out there that were inspired by this design, and those other designs have functions that mine doesn't have." Ashanti says he is fascinated to see which aspects of the device others change to suit their own needs for functionality.

"There's a conversation happening. I always wanted to focus on the conversation more so than trying to profit from it [financially]. I have profited without actually having to make money in my hand."

"This new eight-bit scale is going to allow me to play music that can actually create computer code simultaneously. That is going to be fucking interesting as shit," he says. "[What] will emerge out of that field, there's no way for me to ask myself to look out for these things." Technologically-adept creators like him will make the world a much more interesting place.

To listen to -- or maybe the best word is experience -- Ashanti's music, go here: music.onyx-ashanti.com.