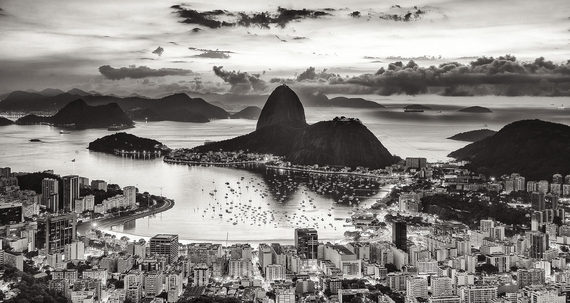 My first book, Dancing with the Devil in The City of God: Rio de Janeiro on The Brink launches on Tuesday; Wednesday will be my first public reading at Boston's Porter Square Books. Nervous and excited doesn't quite capture how I feel: this book pulls together experiences of a lifetime, touches on very personal questions of belonging, and is about a city, and country, to which I have the profoundest of connections.

It's also the book of a journalist, and it is written as such. As the old newsroom saying goes, if your mother says she loves you, check. That's what I did. Once I landed in Rio, I took all the upbeat things I'd heard-- the headlines about Brazil's economic boom, its surging middle class, plus all the talk of the legacy that would be left by the World Cup and the Olympics -- and began to sift through them. That's journalism.

As a Brazilian -- albeit one that had spent a total of 30 years abroad -- I was also immune to the romanticism that fogs so many foreigners' views on Rio. Yes, the place is a tropical paradise complete with palm trees and technicolor sunsets, but to me the cute black kid selling popsicles on the beach isn't a great photo opportunity: he's a symbol of our gravest failures. I don't see incompetence and disorganization as charming and excusable downsides of the colorful Latin Character (excuse me while I roll my eyes - I've heard this one so much), but as hurdles that stand in the way of good governance and allow corruption to run rampant.

So, although Rio is gorgeous and Carnaval is fun, the book I wrote doesn't have a list of the top ten beaches, or insider's tips on how to survive seven days of partying in the streets, though you may get a few good ideas. It's true, I often stayed up late with a caipirinha or two, and broke up a scorching day with a dip in the ocean and a long drink from fresh coconut. Who can resist? But as I moved through the city, I was reporting: how did the Bay turn into a toilet overflowing with untreated sewage? And what of that promise to clean it up by the Olympic Games? And all this talk of making Rio safer, safe for the Olympics -- was the city safe? Safe for whom? At what cost?

I asked because it was my job, but also because these were my own questions. As a Brazilian, I needed to know. The answers I found often left me furious, thoughtful or laughing out loud. Much of the time, they weren't what I'd hoped for. I wanted better for Rio, for Brazil. So much of what I wrote was critical.

And that's what got me in trouble.

It happened during one of those long Sunday lunches with the family, at that point when everyone is full, flush with warmth and wine and the kids are napping, so the adults can push back their chairs, nibble on desert and talk a bit. I was ranting about the Olympic Golf Course -- built on what was protected land, pushed through by the mayor during those high summer days between Christmas and New Years when no one is paying any attention.

My mom turns to me, puts down her fork, asks if this would be in the book. It would, I said. And the stuff about Vila Autodromo? Yes, that too.

"Why can't you say something nice?" she asked. She wasn't joking; she was mad.

This sensitivity isn't particular to my mom. As anyone who has ever written about Brazil knows, Brazilians are sensitive to criticism about their country, and react defensively. This includes my family. This is especially true when it will be seen "lá fora," out there, by foreign eyes. And for a Brazilian to do it -- well, it's in poor taste at best, if not downright treacherous. Foreigners who care about Brazil will also jump to its defense: Write about pollution and someone will argue that other countries are polluted too. Write about corruption or corporate malfeasance, and Enron will be resurrected. Deforestation brings up arguments that the United States and Europe have already torn down all their forests.

So mom: I'm not picking on Rio, or Brazil. Journalism is a service, and I do it in Brazil as I did it in the US: because it is my job, and because I want to see improvements. What I write is a reflection of my hopes, not my disdain, whether it is about a river destroyed in California, or a stream-turned-sewage-canal in Rio; or about pollution in Brazil's water or pollution in American National Parks.

Holding my own country to different -- lower -- standards would be the real offense. I expect more, not less, of Brazil.