When Russians try to talk sense into an impatient, restless person, they say, "For heaven's sakes, slow down! It seems like you are sitting on a nail!" I wonder if that describes the art itch that propelled me in recent days to dash all over Southern California.

One day, I jumped in the car, heading north. Two hours later, I was in the Santa Barbara Museum of Art, checking out three new exhibitions running through the summer. The most prestigious is no doubt "Van Gogh to Munch," comprised of loans from two private foundations: one is Armand Hammer's, with which we Angelinos are quite familiar, and the other foundation is named after Sarah Blaffer, an art patron and philanthropist from Texas. The exhibition provides a pleasant opportunity to stroll through the galleries, while sampling landscapes, still lifes and a few nude figure paintings by a variety of major late-19th- and early-20th-century artists.

The problem is that there are no treasures there, just minor pleasures, like Berthe Morisot's portrait of a young girl with a dog, or Van Gogh's still life with lilacs. But for the life of me, I cannot understand why curators chose to show a few very late, very bad nudes by Edvard Munch. Talk about a great artist having a bad hair day, or, rather, decade. 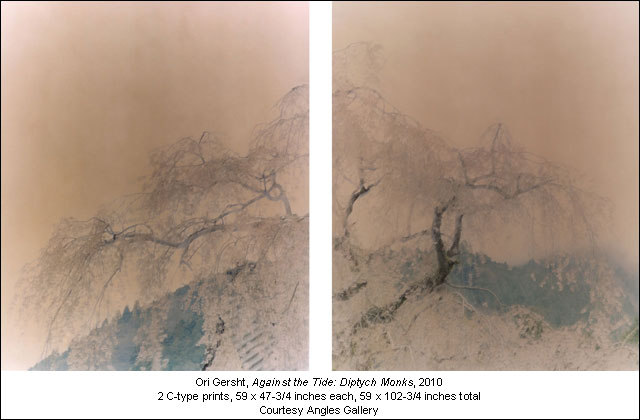 I've been following the career of Ori Gersht, an Israeli photographer living in London, for quite a few years. The exhibition in Santa Barbara is his first museum show on the West Coast, and it provides a good opportunity to survey his works, including recent videos of exploding still lifes, and I mean literally exploding -- very loudly exploding -- still lifes. Concurrent with his Santa Barbara exhibition, which I found a little bit crowded, there is an appealing show of Ori Gersht's new works here in L.A. at Angles Gallery.

The biggest surprise for me in the Santa Barbara Museum was the exhibition of Grant Mudford's large black and white photo portraits of Los Angeles artists, shot mostly three decades ago. Mudford has made a name for himself as an excellent architectural photographer, so it's intriguing to see him here going in a totally different direction with his camera.

Another day, another trip, this time south of L.A. The Long Beach Museum of Art has an exhibition of over 200 small and large portraits on glass painted by Pasadena artist Ray Turner. My favorites are his latest works, where the artist breaks through the academic constraints of realistic portraiture and opts for wild, gestural, semi-abstract images, threatening to shatter the very glass on which they're painted. 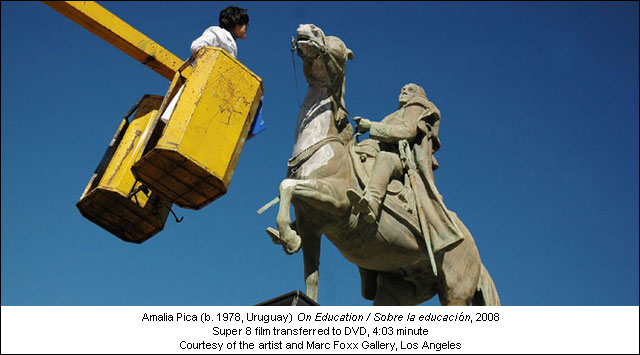 Nearby, at the Museum of Latin American Art, I went to see an ambitious exhibition of video works by Latin American artists dealing with a variety of important political and cultural issues. But truth be told, what captured my attention was another, relatively small exhibition in a side gallery, which introduced me to the works of contemporary Mexican artist Gabriel de la Mora.

The title of the exhibition is "Fragile," and it couldn't be more appropriate, as most of the works are surprisingly made from human hair. Some of the images are realistic portraits; others are suspended-in-air sculptural abstractions. Somehow, these works, in spite of their fragile appearance, have a solid aesthetic backbone. 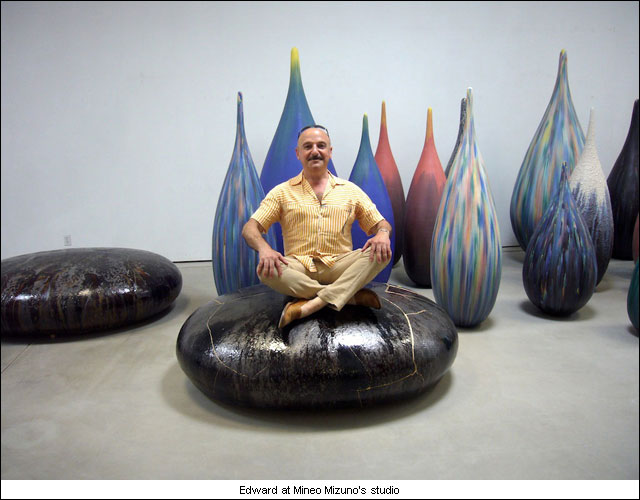 I wish you could join me on my other two recent trips to the studios of artists living as far as Ojai or as close as Glendale. But take a look on KCRW's website at the happy smile on the face of yours truly, sitting amidst large ceramic sculptures in the studio of well-known artist Mineo Mizuno. Here is a portrait of an art critic at last contained and sitting still.

Edward Goldman is an art critic and the host of "Art Talk," a program on art and culture for NPR affiliate KCRW 89.9 FM.

To listen to the show and hear Edward's charming Russian accent, visit Art Talk on KCRW.