Another bit of news rolls out with more potential Wendy Davis voters asking the question: "What in the hell is she thinking?" In a country of damned-near (I like it that damned-near can be used as a compound modifier) weekly school shootings, the Texas Democratic gubernatorial hopeful told the Associated Press she favors an "open carry" law for gun owners, which means, uh, she thinks people should be able to openly carry guns.

Pragmatism is winning out over principles.

The announcement seems both unnecessary and, in part, contradictory. From a politically strategic standpoint, Davis will not move the needle by letting gun owners strap on holsters and walk down Main Street like Randolph Scott. The issue might matter to some conservative democrats but they were probably still going to vote for her because Republican Greg Abbott is simply too conservative. And there is nothing Davis can say or do with regard to gun rights that will move GOP voters in her direction, even if that is one of their central concerns.

Davis said she also backs regulations that "help ensure that only mentally stable, law-abiding citizens may carry, whether concealed or open." Because that's worked out really well around the country. Neither Texas nor the rest of the U.S. has been very competent at keeping guns out of the hands of troubled souls. Killers get guns. Increasing supply and legal availability doesn't reduce killings.

In the first sixteen years of the concealed handgun license availability in Texas, however, there were thirty murders or manslaughter convictions by licensees. The number is low, unless you were one of those thirty or their family members, but Department of Public Safety figures indicate the rate of conviction for the general public and non-holders of conceal carry permits is about ten times higher. Concealment may, in fact, be a part of what makes that law fairly functional.

But what is the point of "open carry?"

Davis is at odds with her own party on this issue. Emmanuel Garcia, spokesperson for the Texas Democratic Party, was quoted by the AP as saying, "There is no public safety justification for open carry." Also, the director of the Texas Chapter of Moms Demand Action for Gun Sense in America, Kellye Burke, suggested openly carrying a handgun is about "intimidation and not protection."

"I don't think people are aware of it. They just haven't seen it yet. People are completely shocked how strange and lawless it looks to have that kind of firepower in our daily life," Burke told the AP.

Even stranger, there's no real polling that justifies Davis' position. Never mind the fact that this is the type of issue that the average voter isn't even thinking about, there was not a single Democrat in the Texas house that signed onto an open carry law, and a survey by Texas Politics on gun control indicates that 72% of the state's Republicans are either in favor of stricter gun control laws or leaving the present regulations unchanged. Where is her constituency for this ill-considered pronouncement? And why now? Or why ever?

There seems little doubt that we might deal with an individual differently when they have big iron on their hip. Look at the guy in the photo below who is getting his food at a Burger King in Colorado. Who's going to tell him no when he says he wants more mustard on his Double Whopper? 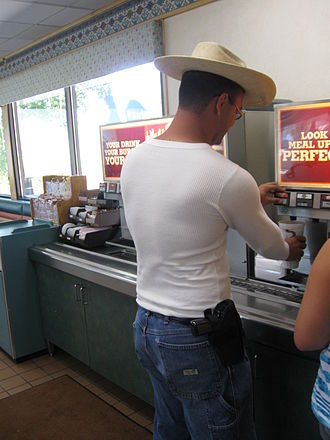 "Where's the condiments and bullets?"

Davis might just be checking off conservative boxes to attract marginal voters but she is, at a minimum, partially contradicting a previous position. In the 2011 Texas legislative session, State Senator Jeff Wentworth tried greatly to get passed a "campus carry" bill that would have allowed students aged 21 to have concealed handguns on their persons while attending college. Davis was so determined to stop the bill that she almost missed her own daughter's graduation from college. She did not leave the chamber until another senator agreed to change his vote to keep the bill from the floor while she was out of town for the day.

The Wendy Davis that has emerged thus far early in the Texas gubernatorial campaign has done little to distinguish her political profile from the Republican. She has said she is against a state income tax, wants expanded gun rights, and speaks in generalities about public education and infrastructure with no clarity of funding. Choice appears, at the moment, to be the one question where Davis differentiates from Greg Abbott, which is not sufficient to build campaign momentum.

Why doesn't she speak more clearly and directly to Texans who are tired of radical conservatism?

She's lost my vote with this Open Carry crap. I believe in the Second Amendment and have never felt the conceal carry legislation was as dangerous as portrayed. People have a right to guns. People also have a right to not get shot by guns. We even have what seems a moral right to go into a public place and not have to wonder if the guy wearing the .45 in his holster and swilling beer is not going to get pissed about something inane and clear his leather and start firing. A person entering a room wearing a holstered gun in open view completely changes the entire dynamics of that room without any real purpose.

I can't vote for Greg Abbott. And this makes it impossible for me to vote for Wendy Davis. I know politics is all about compromise. I've been around a bit. I know we sometimes have to settle for not getting everything we want in a candidate. But there are some things I refuse to accept in a potential leader. Pandering to the right to support Open Carry Laws fits in that category.