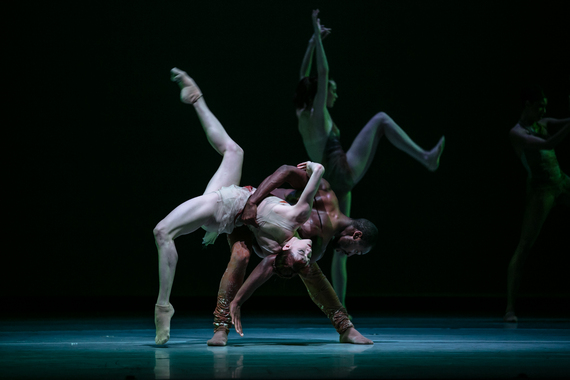 Imagine if a person could be blown out like a match. Her soul would slither toward the sky until a gust of air foiled its escape.

On Friday at Jacob's Pillow, Courtney Henry could have been that soul while her skirt danced like fireflies in a dimly lit cabin. She forgot her identity to externalize a feeling. The negative space around her became a vacuum, and she moved with urgent solitude, like smoke running from the wind.

Alonzo King's newest ballet, Biophony, made its east coast debut last week at the Pillow. Dance enthusiasts drove through back roads shaded by towering trees and surrounded by hills ambushed by greenery. Blue skies and wispy clouds watched dotingly as travelers sighed with relief. Outside smelled like oxygen instead of carbon dioxide, and we could breathe freely without drenching our lungs in poison. By the time we arrived at the Ted Shawn Theatre in rural Massachusetts, most of us had surrendered to the soft thrum of the wild. And when the lights dimmed, LINES' Biophony only eased our prodigal reconciliation with nature.

Set to a soundscape by musician and ecologist Dr. Bernie Krause and composer Richard Blackford, Biophony investigated the essence of life on Earth. For four decades, Krause toured the world, collecting data and recordings of communication among the animal kingdom. Through his research, he wanted to return to a primal existence, when humanity had not conceived of its first artificial product: language. A program note claimed: "At one moment in our evolution, we danced and sang predominantly with the vigorous resonance generated by vast populations of non-human animals with whom we lived in a delicate balance." This reminds me of Jean-Jacques Rousseau's "pure state of nature," where men enjoyed a relatively equal status, wanted for nothing, and survived in harmony with other beings. The texture of King's movement reinvented that utopian network, accompanied not by orchestras of high society, but by the choruses of ecosystems.

Elephants bellowed. Bees buzzed. Pigs squealed, and birds squawked. There was no remixing or remastering as the audience fell into the rhythm of our planet.

King is a master of abstract ideas. He can explain the expanding cosmos with a side extension or discover the value of communication through a lunge. But with Biophony, he did not investigate. He transported. We remembered what it felt like when we sat in grass as children, picking dandelions. We mourned the loss of our environs and felt ashamed at our apathy toward collapsing biospheres.

We wanted to return to a space as organic as King's choreography. 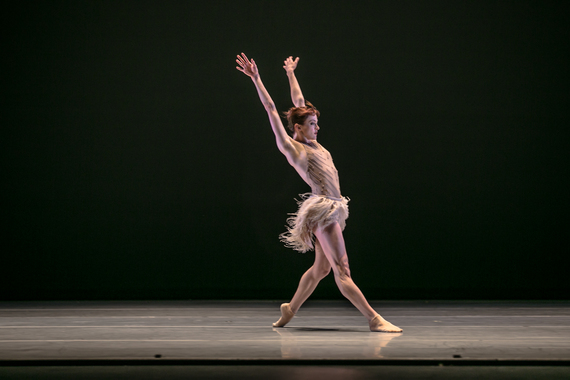 Some of the eight-part piece seemed animalistic, like when Laura O'Malley strutted center stage, her feathers tufted behind her. Other sections grappled with more human motion -- an awkward limp that resembled a toddler's first walking attempt, for example.

But perhaps the most beautiful instances were those that defied categorization altogether, forgoing direct allusions for a spiritual sensation. When Kara Wilkes and Robb Beresford flowed to aquatic noises -- rushing waves, whales, fish -- they evoked the tranquility that you feel on a day at a quiet beach, walking by sandy foam as it washes ashore. Instead of fighting gravity, Wilkes gave into its pressure with the same assimilation of a raindrop on the ocean's surface. She did not imitate water, but she captured its mysterious romance -- how it gives us life, it's in short supply, we waste and pollute it, and we will be warring over it in the next few decades if we don't prioritize sustainability.

Biophony was more than a pleasant vacation into biodiversity; it made you think. Why have we all slipped to cities, where we stare upwards and see skyscrapers instead of stars? Why do we stick in ear buds and ignore our surroundings instead of observing? Why are we no longer in touch with the biophonies, symphonies devised by the universe to give us inspiration and hope?

As I watched LINES, I didn't understand everything. Sometimes, I was distanced, so disconnected from our flora and fauna that I couldn't relate. Other times, I was too in awe of the company's broad movement dialect to peer past aesthetic. Still, when the ensemble shared the floor, I was stunned by something that looked like a "pure state of nature." The dancers fused together in organized chaos; they were species of their own that congealed into one Gaia. Miraculously, they evaded the fabricated notion of individualism that divides man from others and emulated the peace of coexistence.

On the highway home to Manhattan, I had gained a few mosquito bites and lost all of my anxious tension. Visions of Henry's solo swirled around my brain, and I thought, "if only New York City could find that sense of symmetry. We could be happy."