It was theater in its ugliest form:

An audience that by most accounts exceeded a dozen players eagerly watched the degradation - and cheered. It only got worse - far worse - for the pint-size 13-year-olds.

Next came demands to simulate oral sex on a banana held against the groin of one of the three attackers - much to the delight of the ogling crowd. Then, the ringleader in this varsity trio lowered the hazing attack to new depths.

Witnesses said that with rock music blaring and duct tape at the ready to drown out the screams, a hulking 16-year-old lineman grabbed a broomstick and dipped it in Mineral Ice.

This was part of the horrific pre-season football camp scene in August 2003 that landed three upperclassmen from Long Island's Mepham High School in jail and led to the cancellation of Mepham's football season. The depiction above - describing one of the many attacks on Mepham freshmen inside a cabin at a sleep-away camp in Honesdale, Pa. - kicked off a story I wrote back then, as a reporter for New York's Daily News.

The paper, committed to being the first media outlet to identify the teens accused in the attacks, wanted to deliver a strong, compelling story. Editors said the writing and reporting were fine, but what I submitted was too strong. What did get published was a version that toned down the details and pulled back on the drama, but was nonetheless influential in that it named the accused. 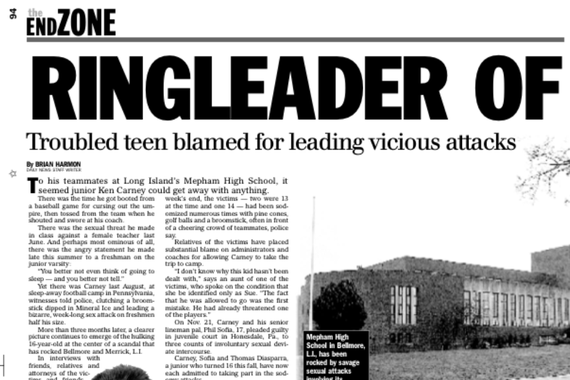 The details that began to emerge last week of the alleged hazing attacks involving members of New Jersey's Sayreville War Memorial High School football team are no less shocking. This fall - before school district administrators appropriately cancelled the remainder of the season on Oct. 7 - freshman football players were routinely subjected to sexual attacks carried out by seniors during a locker room ritual, police said.

Seven players - aged 15 to 17 - were criminally charged Oct. 10 for their involvement in sexual assaults on younger players. One parent, informed by his son, told a reporter with NJ Advance Media for NJ.com that a victim would be held by multiple older players while a finger was inserted into his rectum. The same finger was sometimes placed in the freshman's mouth, according to the NJ.com report.

At the time of the arrests, the coaches - except the assistant arrested for steroids possession a week before the hazing story broke - still had their jobs.

Hazing - in varying degrees of severity - exists at all levels of team sports. In the NFL, summer camps each year yield images of rookies wrapped and immobilized by yards and yards of athletic tape.

Last month, rookies across Major League Baseball were encouraged by the veterans on their respective teams to carry out goofy public acts. On the team's website, the New York Mets proudly posted embarrassing photos of sheepish-looking rookies pushed into parading around the clubhouse dressed in feminine super hero costumes.

Given how widespread hazing is, it cannot be eliminated. And nor should it be - so long as it's all in good fun, it's not dangerous and the participants are willing. However, it should be carefully monitored and contained, particularly at the high school level.

Coaches may want to rein in the seemingly good-natured hazing that calls on freshmen to clean the field or carry off all the equipment after practice. Simply because this type of delegating makes an impression on young minds that the lowerclassman is something lesser than the rest of the team.

Another factor to consider is that when a school team's hazing customs go unchecked, the bullying will grow more degrading every season. In many instances, each class looks to top its predecessor.

Consider that during Mepham football's 2002 pre-season camp, the worst hazing act was a swirly, which involves holding someone upside down and dipping the person's head into a toilet bowl as it is flushed.

Seems mild when you look at what happened at their camp in 2003.

With one 250-pound lineman sitting on top of the fully-naked victim, the equally beefy ringleader of the Mepham hazing attack began violating the freshman with a broomstick that had been dipped in Mineral Ice. Duct-tape muffled the screams. Laughter from the spectators and the beat of the music took care of the muffles.

Back and forth, the attackers bounced between two freshmen. Friends since kindergarten, the two teen victims were now linked as objects facing bizarre brutality.

Similar attacks were repeated throughout the five-day camp, with the attackers adding beatings and pine cones and golf balls to their sadistic repertoire. Those objects were also dipped in Mineral Ice.

By some accounts, the attackers grew tired of the assault and allowed the victims to return to their bunks with golf balls still inside them. 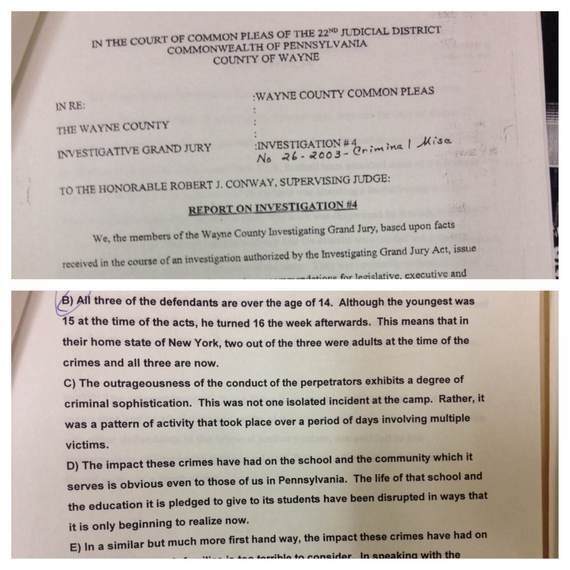 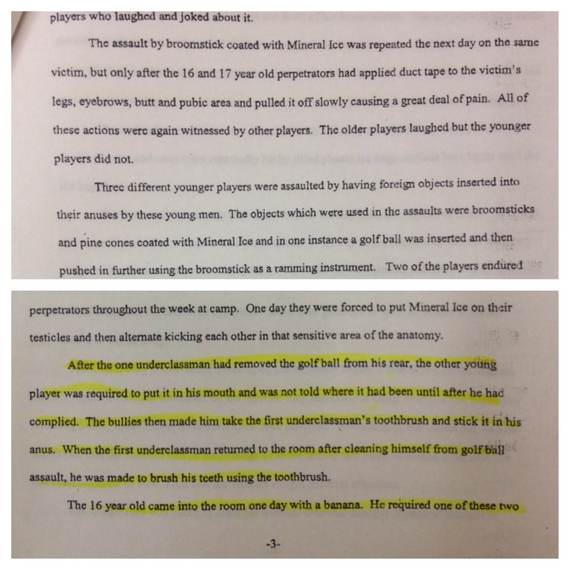