The single event that has angered Icelanders the most since Iceland's recent financial collapse was Great Britain's decision on October 8, 2008, to invoke its anti-terrorist legislation against Iceland.

Landsbanki, one of Iceland's three large investment banks, had solicited funds from British and Dutch consumers by offering high-interest internet savings accounts through its online IceSave program. When a run began on Iceland banks, its financial authority placed Landsbanki in receivership on October 7th.

However, after public remarks that evening by the head of Iceland's Central Bank and private remarks by Iceland's Finance Minister Árni Mathiesen to the British Chancellor of the Exchequer Alistair Darling indicated that perhaps only domestic accounts would be insured by the government, British authorities froze Landsbanki's assets--in effect, calling the Icelandic government a terrorist organization, since it controlled those assets on that date.

Great Britain allegedly held up the International Monetary Fund's (IMF) loan to Iceland, as well as disbursement of the second tranche of the loan until Iceland agreed to reimburse its citizens for their IceSave losses.

It is hard to imagine that much real negotiating produced this agreement; to begin with, Icelanders don't have any experienced negotiators, and here we're dealing with age-old colonial overlords. We've been pushed into a corner and told, these are the rules. The 5.5% interest for a loan this high is exorbitant; at the very least, the interest rates demanded of Iceland should be the same as the British and Dutch shell out on their own foreign debts.

Now, there are logical arguments that can be made to justify the IceSave agreements. Yes, there may be sufficient Landsbanki assets in England and Holland to cover savers in those countries, so perhaps the risk to Icelandic taxpayers is minimal. (By the way, Landsbanki's former owner, Björgólfur Thor Björgólfsson, has an address in London, a luxury lair courtesy of Iceland's unwashed masses - you want money, go after him! And who was working in these Landsbanki branches in England? Where are these people, what is the responsibility of the obnoxiously overpaid directors who worked there or anywhere else in this gigantic swindle factory?) 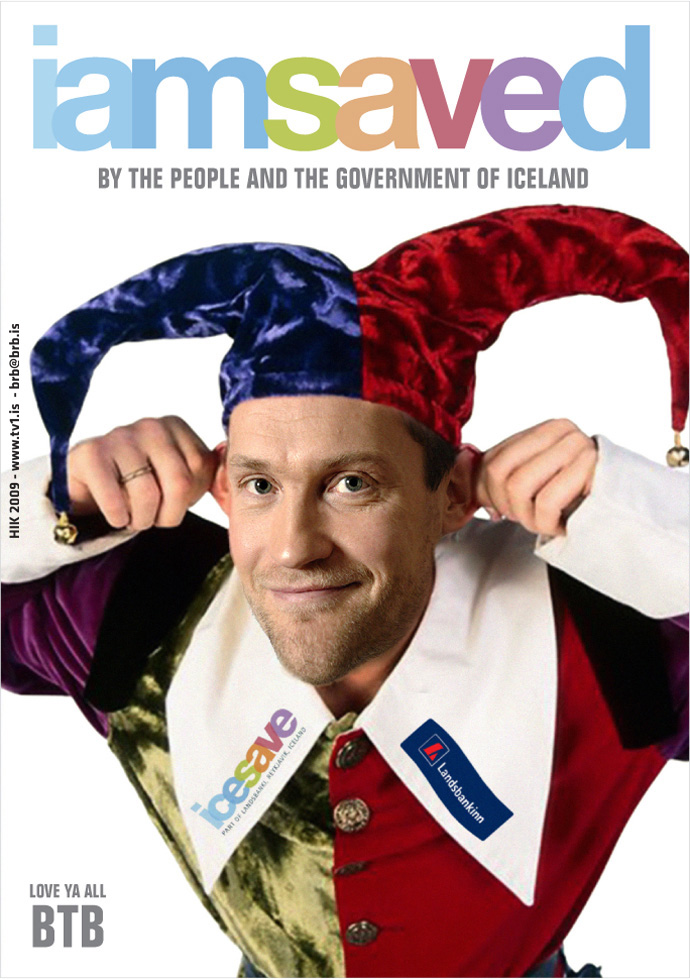 Yes, the agreements were probably necessary to obtain the IMF funds and to avoid having Iceland's sovereign debt rating slip to junk bond status. And, certainly, holding Iceland's financial regulators responsible to outside authorities may tame the nepotism and incompetence that characterized those offices while the banking bubble grew.

So it is possible to argue that this is a reasonable thing to do. England says, we're not going to do business with you if you don't show responsibility. We got screwed by you, give us our money. That's not out of line, and one can understand the anger of depositors who lost their money, but having said that, they're not showing a lot of compassion for Iceland's suffering either. And when it is the government that's feeding this bully attitude, like invoking anti terror law against a military ally based on a couple of conversations with a few muttonheads, that is completely out of line!

The Icelandic government doesn't seem to have considered any alternative solutions. Some experts believe the invocation of the anti-terrorist law was a violation of the EEA Treaty and the UK by using these illegal means to seize the property of Landsbanki thus overtook the obligations of the bank. But the Icelandic government doesn't want to go to court - probably too much dirty laundry that cannot stand the light of day.

And why haven't we heard anything about America, Iceland's old ally? Iceland allegedly asked Russia for help, whose only interest in Iceland was as a money laundering center, but the only thing I've heard about recent US-Iceland relations is that at last April's NATO summit, President Obama expressed his wish to visit Iceland and spoke with the foreign minister about collaborating on producing renewable energy sources and "green" jobs. Has Iceland followed up on this or extended its arms, asked for aid or help in the form of say expert advice (I say, let's get Eliot Spitzer on that team of expert prosecutors!). Not to expect miracles, but at least the US doesn't have it in for the Icelanders like the British do.

The anger that has been simmering among Icelanders since October 8th exploded when the agreements were announced. A Facebook group denouncing the Icelanders who negotiated the agreements as traitors has garnered over 33,000 members. There have been regular demonstrations before the Alþingi urging legislators to reject the agreements. Allusions to the terms imposed on Germany after WWI have been made.

It has not escaped anyone's notice that no such terms were sought against the United States due to Lehman Brothers' removal of assets from England immediately before its collapse in September 2008. America, of course isn't on the hook for Lehman because it cannot be bullied around, but little Iceland can be browbeaten into submission. The British bully us because they can. The disregard for Iceland's sovereignty evokes memories of England's blatant disregard for Iceland's claimed territorial waters during the so-called Cod Wars of the 1970s.

Coincidentally, the other major issue currently before the Alþingi is the ruling Social Democratic Alliance's call for a referendum authorizing Iceland's application for membership in the European Union.

England's continued disrespect for Iceland's sovereignty makes me question why exactly Prime Minister Jóhanna Sigurðardóttir believes that membership in an organization dominated by Great Britain would be good for Iceland. We are, in their eyes, a second-class country (at best), to be bullied into submission whenever our interests conflict with theirs.

Does she imagine that British fishermen will not push for access to our fisheries, despite their complete failure to properly regulate their own fish stocks? Does she truly believe that our voice will be heard on important matters?

What proof is there that we won't be treated like a bunch of hillbillies (which is how we are now being treated)? This is how they treat us now, and their past dealings with Iceland frankly are not encouraging. England with America sets up an air force base in WWII, to protect themselves; then they come in the 70s and steal our fish until they're forced to stop. Then they make sure Icelandic banks go under, next they go after the banks, and after that, the government. Why in the world would we want to join an organization with people that treat us like this? What makes Jóhanna think things will get better?

Deal or no deal, I must say I am pessimistic about our future. To quote Laxness again, right now I have visions of "starving Icelanders remove their shoes and cut pieces of them into their mouths like pancakes."