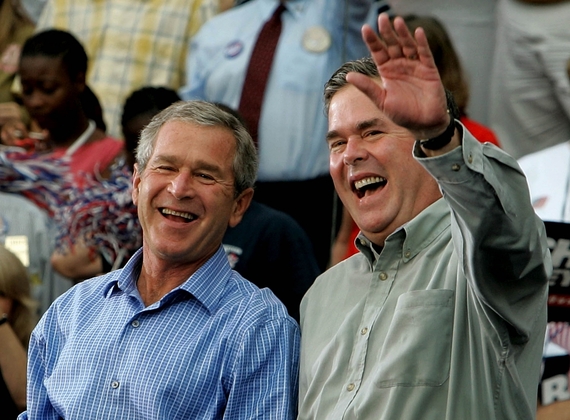 Just when you thought the summer of Fant4stically-failed reruns was over, here comes Bush III. As the New York Times reports on August 24, candidate Jeb has finally come out swinging at provocations from his Republican rivals.

Contrary to tough-guy Jeb Bush, I would not leave the door open to torture, not even for use against those U.S. officials who, post 9/11, secretly conceived and implemented torture in our foreign policy. Experts now agree that torture does not produce credible intelligence. It is also immoral and illegal. Torture defiles those who undertake it and taints all Americans in whose names it has been committed.

Its practice should not be on the table at presidential debates. U.S. representatives responsible for opening, and carrying out, this Pandora's box should be tried for war crimes, as William Cheng deftly summarizes.

With a possible remake in development, it's time to wrestle again with past Bush presidencies.

The current chaos in the Middle East lies at the feet of America's interventionist neoconservatives. Dick Cheney et al seem to have taken inspiration from the La Fontaine maxim that "might makes right." With a dash of Tony Stark's desire to carry on his father's "unfinished" work, George W. Bush went along with his consiglieri's suicidal policies.

Many journalists, anti-war protesters, and experts predicted the political void that would open if the U.S. toppled the secular nationalist Saddam Hussein. Extremism loves a vacuum. Having failed to conquer Al-Qaeda, the Bush regime created a void in the Middle East lately filled by ISIS, another group that doesn't rule out torture. But few predicted the U.S.'s scandalous embrace of "enhanced interrogation techniques" (read "torture"), now depressingly catalogued in countless books and documentary films.

Could it possibly be that a Bush III administration will revive the use of torture against the Islamic state, an organization that owes its existence to the U.S.'s disastrous occupation of Iraq? And so our country prepares to wrong the wrongs of the past.

Beginning in 2002, I started researching Arab cinema, eventually traveling to North Africa to learn what filmmakers from Tunisia, Algeria, and Morocco had to say about the so-called "clash of civilizations," the invasion of Iraq, and the Middle East generally.

Deeply bi-cultural, educated Tunisians speak French as fluently as Arabic, and understand the French Enlightenment as well as the history of the Ottoman empire. Among the most liberal of their Arab brethren, Tunisians - in private then highly critical of their own totalitarian government - complained bitterly about Saudi Arabia's exportation of Islamic extremism throughout their region and the world.

18 months after the overthrow of Saddam Hussein, I attended the Carthage Film Festival in Tunis, then the largest festival of Arab cinema in the world. A taxi cab driver from the airport told me, "Saddam is a bastard, but he's our bastard." Tunisian filmmakers mused that if the U.S. really wanted to promote democracy in the Arab world, then it should have invaded Tunisia. A progressive, secular middle-class country, Tunisia held the most promise for a representative government à la Turkey. Tunisia is not a cookie-cutter country assembled by colonial powers. It has been a coherent nation-state for hundreds of years. In addition, the police state of dictator Zine El Abidine Ben Ali routinely tortured its political opponents.

In 2006, I again attended the Carthage festival. In the ongoing mayhem of the occupation of Iraq, Tunisian and Arab directors, producers, and critics remained stupefied by the 2004 election of G.W. Bush as president. Ok, they said, the Republicans stole the 2000 election, these things happen in the Middle East as well.

In 2016, history risks repeating itself, first as tragedy, now as farce. For those who have been paying attention - and I know it's hard with Donald trumping around - Jeb Bush has quietly assembled a group of foreign policy advisors. 19 of 21 come from his father's or his brother's administrations (including Paul Wolfowitz, the "architect" of the American war in Iraq), opening wide the possibility of further adventurism in the Middle East.

Candidate Bush now walks a thin red line between owning and disowning the finally unpopular war in Iraq, wanting to have his torture cake and eat it, too. Do politicians who endorse torture actually imagine what it entails? Why won't a Republican presidential candidate step forward to publicly undergo waterboarding, as did journalist Christopher Hitchens, or nudity, slapping, humiliation, sleep deprivation, and hanging from ceiling, all disgracefully used by the CIA in tandem with complicit governments abroad?

In 2014, our Senate produced a report demonstrating that, 1) the U.S. use of torture was more brutal than previously admitted; 2) the CIA lied about its use of torture; and 3) torture failed to produce intelligence that saved lives. Utilized during the Spanish Inquisition, waterboarding, like all forms of torture, has been denounced by Pope Francis as "a mortal sin." As is painfully clear in America today, torture rots the body politic that permits it.

Of resuscitating torture techniques that contravene the codes of the Geneva Convention, candidate Bush says that "now we're in a different environment." If elected, Jeb promises to take us back to the shameful policies of the new millennium, when the U.S. regressed to an "eye for an eye" method of its enemies. With a Bush around the corner, one could say that, as Faulkner put it, "the past is never dead. It's not even past."

Is the American public really ready for a Bush family dynasty to rival the Saudis? Fool us once, shame on you, fool us thrice....

If you think Bush II was bad, don't hold your breath for the sequel, or you may find yourself underwater.

Jeffrey Ruoff is an associate professor of Film and Media Studies at Dartmouth College and OpEd Project Public Voices Fellow.