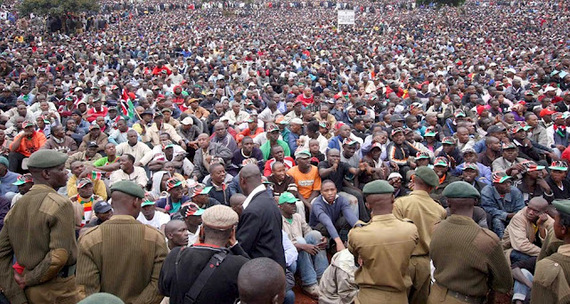 Kenya, is at the cusp of a "demographic dividend," which could transmute Kenya's fortunes in the first half of the 21st century -- but only if the country takes the right steps towards investing in the current youthful population.

Millions of people in East Asia were lifted out of poverty by lowering dependency ratio and individuals and families were be able to make savings which translated into investment and boosted economic growth in countries such as Malaysia, Singapore, South Korea, Taiwan and Hong Kong. Combined with robust policies in education, health, employment and empowerment of its women, they were able to capitalize on their demographic window during the period 1965 and 1990.

Today, youth form two-thirds of Kenya's population, many of them unemployed, with the ratio of youth unemployment to overall adult unemployment standing at 46 percent (2009 Kenya Population and Housing Census). At the same time, there are eight dependents for every ten working Kenyans, meaning that the average worker will very often have little left to save or invest for growth. Kenya's low gross domestic product (GDP) per capita of US $1246 has contributed to increased family poverty and economic inequalities.

Our ability to seize the opportunities available to our young population will depend on how we address the key challenges plaguing Kenya's education, health, empowerment and employment.

However, if Kenya's does not act, the demographic dividend risks becoming a demographic disaster, since large numbers of unemployed, frustrated and unemployable youth fall prey to the blandishments and falsehoods spread by extremists and fanatic groups.

Kenya is at a demographic transformation. Fertility levels are declining gradually and Kenyans are living longer. There is reason for optimism that Kenya can benefit from a demographic dividend within 15 to 20 years. It is estimated that Kenya's working age population will grow to 73 percent by year 2050, bolstering the country's GDP per capita 12 times higher than the present, with nearly 90 percent of the working age in employment. (NCPD Policy Brief: Demographic dividend opportunities for Kenya, July 2014.)

But this is only "a window of opportunity", which shuts in an average period of 29 years. There's nothing pre-ordained about a youth bulge producing a growth dividend.

The demographic dividend can be realized through a number of steps.

First, improvements in health and nutrition status, especially of girls, women and children, will contribute to a decrease in the number of children born to each family, as survival improves.

It calls for programmes to increase access to family planning to prevent unintended pregnancies leading to fewer births. Reductions in fertility coupled with child and maternal mortality declines are all associated with greater power for women to make decisions about how many children they want and how to raise them. As women cease spending their most productive years having and raising children they can then enter the workforce and contribute to economic production.

The second step is investment in the education of youth. Appropriate education and skills will enable youth to participate in the economy and provide needed labor for its growth. In addition, studies have shown that girls' education particularly secondary level, and empowerment will delay early marriage and slow adolescent fertility. Cultural, social and economic barriers that hinder empowerment of girls and women should be addressed.

Women are half of Kenya's demographic dividend; if they are given the right tools and community support, they can not only become financially independent, but be the engines that fuel Kenya's future growth.

The third step is to have an economic environment where the educated youth can find well-paid, decent jobs. Economic policies must target job creation in areas that have potential for longer term returns, including technical and vocational education, agriculture and technology.

Kenya is about to reap the biggest demographic dividend in world history of a young, working age population at a time when many other economies of the world will be aging.

Investments in health, education and economic policies must then be underpinned by good governance, the exercise of public authority which entails adherence to the rule of law and enhancement of human rights applied universally.

By ensuring healthy, educated, productive populations, do we have any chance at all of making the Kenyan dream of a prosperous middle to high income country a reality in our lifetimes.

Dr Josephine Kibaru-Mbae (@NCPDKenya) is the Director-General, National Council for Population and Development, Govt of Kenya. Siddharth Chatterjee (@sidchat1) is the Representative of UNFPA Kenya.