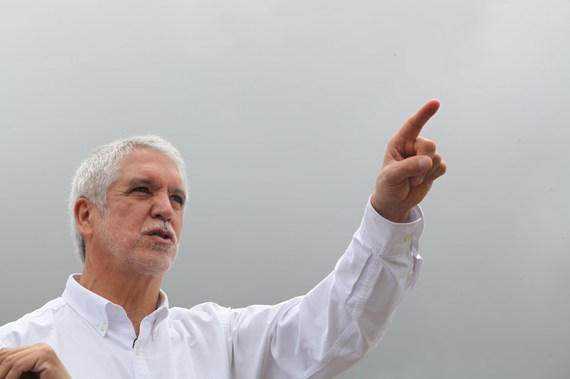 As the long-awaited, much-heralded and not-free-of-enemies peace process in Colombia meanders to a signing, and the South American nation begins to ponder the challenges of incorporating almost 10,000 demobilized fighters into a faltering economy, corruption and impunity remain major threats to the country's fledging democracy.

Two issues in recent weeks -- the Panama Papers and Bogotá's Mayor Enrique Peñalosa non existing academic credentials -- have raised their heads only to remain buried in the headlines.

Regarding the Panama Papers, Semana's Maria Jimena Duzán writes that the names of 1245 appear on the files. Yet, "It did not even bloom for day in the Colombian media which has chosen to give this topic a low profile that does not deserve, a fact that diminishes us and positions us very poorly in public opinion".

As to Mayor Peñalosa's sweetened resume, Luis Fernando Parra wrote an excellent note for El Molino Online. We've translated it into English and share in this space.

With just over 100 days in his second mandate as mayor of Bogota, the capital of Colombia, Enrique Peñalosa was discovered for the second time in a month to have included falsehoods in his academic credentials, which for many years he has shared with Colombian society and government as well as international institutions that he claims to have advised.

Mayor Penalosa's resume, posted for the world to see in the City's webpage, boasted until the end of March this year, undergraduate studies in economics and history at Duke University, a Master's degree in government at the Institut International d'Administration Publique and a Ph.D. in Public Administration from Université de Paris II.

It so turned out that Colombia researchers Juana Afanador and Carlos Carrillo recently discovered that the Université de Paris has never offered a Ph.D. program as Mr. Peñalosa listed both in the books he's written as well as in the many interviews he has given.

Faced with the falsehood, the Mayor's press office said it was an "error". And, despite the implications that such an event could trigger anywhere in the civilized world, Bogota saw the withering away of a justifiable trial over ethical matters.

Except for the daily El Espectador and the magazine Semana, noteworty publications although of limited circulation, which dealt marginally with the matter, almost all of the major media outlets ignored the facts denounced by Afanador and Carrillo. A couple of columnists even downplayed the issue, justifying it as an eccentricity of some politicians, arguing that to govern effectively, it's not necessary to hold a PhD, forgetting that it was Peñalosa himself who had marketed himself as a technocrat, assuring the public than more than a politician, he was a person with a solid academic background, and this had earned him the merit to again govern the capital city of Colombia.

So, with the adjustments made on the Mayor's resume on the web, it was soon business as usual for Mr. Peñalosa. Thus, a matter that should have been be approached from an ethics and transparency point of view was reduced to the level of soon-to-be-forgotten urban anecdote.

Only a few days ellapsed since the "mistake" was made public about the inexisting PhD, when other matters surfaced questioning Mayor Peñalosa's already flimsy academic credentials. The very same researchers, Afanador and Carrillo, noticed that the Mayor's "new" resume lists a master's degree in Government, acquired over the course of four semesters in the now defunct Institut International d'administration Publique, now merged with the Ecole nationale d'administration (ENA). It does not exist either. Mr. Peñalosa took those courses between 29 August 1978 and 6 July 1979, and they fall under the category of Methods of Modern Public Administration. This program by its short duration and simplicity did not require a thesis from Mr. Peñalosa.

Given these new and delicate findings, both researchers have decided to inform the Attorney General's Office, a move that will surely weaken the Mayor's ability to govern and his public support, despite the pro-establishment media's reluctance to report on these developments.

But what is certain is that neither the nation's Senate, nor Bogota's City Council, the chambers with jurisdiction to call the Mayor into account, are interested in the matter: Both institutions are now headed by politicians who have been accused of forgery and plagiarism in their academic credentials.

And because in Colombia there's never enough, top the above with recent revelations that link the tax havens in the Panama Papers and Panama Data so with three officials in Mr. Peñalosa's cabinet -Planning, Social Integration and Mobility -- as well the director of the city's billionaire subway development project, who recently assumed his post. Neither one of those developments has been mentioned by the media or Mayor Peñalosa himself.

You can read this note in the Spanish original, along with more news about Colombia and elsewhere, at El Molino Online.