It is a rare position for former Sen. John Edwards. On the road to the White House, the North Carolinian has frequently positioned himself as the most progressive candidate among the Democratic frontrunners.

But as part of an increasingly aggressive push to make up ground in the race, he has staked out a position on immigration that is to the right of his chief primary opponents. 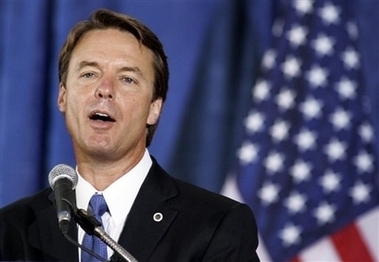 At the debate and on ABC's This Week this past Sunday, Edwards drew a distinction between himself and Sen. Hillary Clinton, D-NY, saying he disagreed with New York Gov. Eliot Spitzer's proposal to grant drivers licenses to undocumented immigrants. Clinton backs the proposal as a way of solving crimes and promoting road safety.

Moreover, Edwards said that while states should have say over the issue until comprehensive reform can be passed, once reform is enacted, licenses should only be granted to those immigrants who are on the path to citizenship.

Edwards' stance contrasts sharply from what he advocated as the Democratic vice presidential candidate in 2004, when he was unequivocal in his support for issuing driver's licenses to the undocumented.

So how does a candidate who has embraced progressive stances on many critical issues from 2004 to 2008 shift conservative on immigration? The answer, some analysts say, lies in the political dynamics of Iowa, the first caucus state.

According to David P. Redlawsk, associate professor of political science and director of the University of Iowa Hawkeye Poll, Iowa Democrats are "center-left" when it comes to immigration policy. Sixty-seven percent, according to a recent poll, prefer to "allow undocumented immigrants to become citizens if they meet criteria." However, many blame the government and employers for the illegal immigration problem rather than the immigrants themselves.

In recent trips to Iowa, Redlawsk noted, Edwards has highlighted aspects of his immigration policy that go over well with the Iowa crowd. He has been greeted with applause for declaring that illegal immigrants should learn English as a perquisite for citizenship. He has also, to good reviews, declared that it is important to be "harder on employers who violate the law" by hiring the undocumented to work for them. Edwards' opposition to granting driver licenses to illegal immigrants appears to fit this mold.

Still, some political observers claim, the areas of immigration policy disagreement between Edwards, Clinton and Sen. Barack Obama, D-IL, are at once minor and exaggerated. Both Obama and Cinton have called for a greater crackdown on those who employ undocumented workers as well as for requiring immigrants to learn English as a step towards citizenship. And while Edwards has used the issue of drivers licenses as a way of separating himself from Clinton, those who study the issue say it's more of a political red-herring than anything else.

"Politically for the Spanish community they are going to want the candidates to be clear where they stand on the issue," said Vanessa Cardenas, director of ethnic media for the Center for American Progress. "Driver licenses is a part, but it is not the solution. At the same time, none of the candidates have been specific. They are trying to walk a fine line."