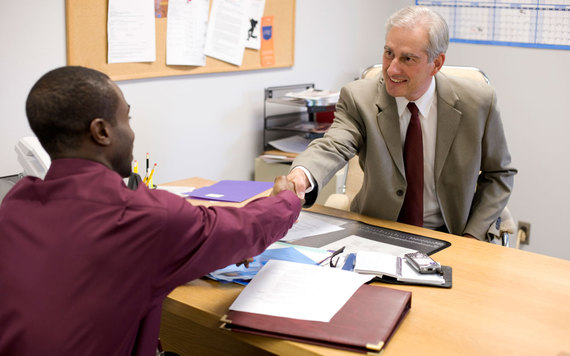 Daequan* came to the New York City-based Center for Employment Opportunities (CEO) only 11 days after leaving prison. He was 19 years old, had spent nearly a year incarcerated, and there were few people in his corner when he returned home. He grew up in the Bronx and Harlem. "There was a lot of negative influence for me -- gangs, street gangs. It's the streets. That's how you get caught up -- it's only trouble. It's fun for the moment, but not in the long run," Daequan shared with us recently. It's a story that we hear all too often. When a person comes to CEO, it's typically just weeks or even days after their release. They are eager for change, but without strong community support and limited work experience and education, the barriers to success can be high.

CEO is a nonprofit corporation that provides employment services to former inmates. The organization works every day to help people like Daequan see what's possible for their lives and strive to give them the tools necessary for success. There are programs that connect with more than 4,000 individuals a year to provide them with job readiness training, paid transitional work and full-time job placement services to help them regain control of their lives. The staff works with each participant individually because every person faces unique circumstances and no one solution can work for situation. CEO's research and data proves that recidivism -- or a relapse into criminal behavior, often leading to reincarceration -- can be prevented with the right support, even individuals with the most significant barriers to employment.

Daequan's is a story heard all too often. When a person comes to CEO, it's typically just weeks or even days after their prison release. They are eager for change, but without strong community support and limited work experience and education, the barriers to success can be high. After all, their survival is at stake.

From 1980 to 2008, the number of people incarcerated in America quadrupled from roughly 500,000 to nearly 2,300,000 people, according to the Bureau of Justice Statistics. African Americans are significantly overrepresented in the U.S. prison population. Despite being only 13 percent of the overall U.S. population, 40 percent of those who are incarcerated are Black. On the other hand, Whites make up 64 percent of the overall population but account for only 39 percent of those who are incarcerated. What's more, for Black men who have been incarcerated, wages after release grow at a 21 percent slower rate compared to White men, according to the Center for American Progress. The statistics are clear: Not only does justice involvement disproportionately affect Black men, but the consequences of that involvement are more severe.

Just looking at the statistics, the odds were not in Daequan's favor when he walked through CEO's front doors. But he was entering a community that was singularly focused on helping him create opportunities to better himself. "CEO gave me experience and showed me that I can have career options now," he said. "I never saw myself working, but CEO showed me it's possible."

Two decades of research has revealed a lot about the drivers of recidivism. Although the science has become increasingly sophisticated, the key drivers can be summed up simply: Mindset and opportunity. If a person's attitude, values, and beliefs allow him or herself to justify committing a crime, then that person is more likely to break the law -- especially if that person is surrounded by opportunities to commit a crime. It takes more than a job to break the cycle of crime and incarceration. But high-impact programs help individuals shift their thinking. Working individually with job coaches and as part of a team on worksites, participants find their own reasons for wanting to come to work each day, and along the way discover the keys they need to open up doors to better opportunities.

In November 2015, Daequan and a few other participants sat down with Valerie Jarrett, Senior Advisor to President Obama, when she visited CEO to discuss the administration's prison reentry agenda. He shared with her his fears and described his challenges. When she asked what he needed to overcome these obstacles he said, "All I need is someone to be there for me. Not to give up on me. If someone were to believe in me, I just might make it. Oh, and a way to earn a paycheck. That would help, too."

During her visit Ms. Jarrett noted that criminal justice reform -- and making sure there are second chances for men and women like Daequan -- was one of the few things that Republicans and Democrats could agree on.

Today the United States represents five percent of the world's population and has 25 percent of the world's prisoners. Approximately $70 billion is spent on corrections yearly in this country, according to a study by the Advancement Project and the Power U Center for Social Change. Many leaders from both sides of the aisle recognize the urgent need to address the shortcomings of our country's justice system given the exorbitant financial and human costs. But our entire country must rally around returning citizens. That means businesses need to examine their hiring practices for people with a criminal record; educational institutions need to create learning and training opportunities; and each and every one of us needs to recognize that no one should even be thought of as an "ex-con" and have their past preclude them from working towards a more promising future.

Sam Schaeffer is CEO of Center for Employment Opportunities