Within the Cave at Durden and Ray 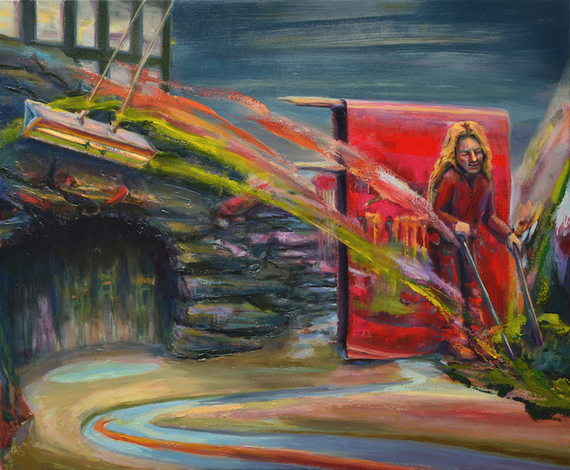 In which painters Esmeralda Montes, Tom Dunn, Mark Dutcher, Thomas Whittaker Kidd, Susan Lizotte (who also curated the show), Julia Schwartz, Kathleen Melian and Judith Linhares each respond to Plato's famous philosophical dialectic commonly known as the Allegory of the Cave. It's that one where he posits that reality as most know it is but shackled shadow-puppetry. The good news is, there is a possibility, albeit fraught and dangerous, to get free and, as it were, see clearly in the bright light of truth. Maybe it is that very freedom and its revelations that we are seeking -- and sometimes finding -- when we look at art.

Behold! human beings living in a underground den, which has a mouth open towards the light and reaching all along the den; here they have been from their childhood, and have their legs and necks chained so that they cannot move, and can only see before them, being prevented by the chains from turning round their heads. Above and behind them a fire is blazing at a distance, and between the fire and the prisoners there is a raised way... And men passing along the wall carrying all sorts of vessels, and statues and figures of animals made of wood and stone and various materials, which appear over the wall? ... To them, the truth would be literally nothing but the shadows of the images. 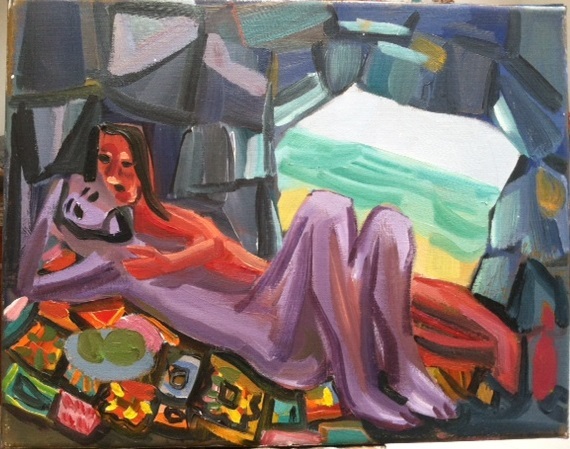 Each of these eight are, at least currently, figurative artists who nevertheless overtly court abstraction in their compositions and techniques, yet remain tethered to figuration by indelible impulses toward narrative, allegory and the meaning of objects and actions. So, they need depictive imagery, but they push its buttons and its boundaries something fierce. Their strategies for testing the limits of interpretive imagic legibility include the use of vibrant colors that go way beyond naturalism, as well as various kinds of expressive line work, surface treatments and seismic perspectival gymnastics that all make it clear we are reading from a lexicon of fables and mythologies. In the context of this show, it is understood that theirs is an invisible, intangible, yet absolutely direct kind of knowledge; an inception and deconstruction of the paradoxical insights each one has gained as they have progressed through figuring it out for themselves.

If the prisoners are released and disabused of their error, at first, when any of them is liberated and compelled suddenly to stand up and turn his neck round and walk and look towards the light, he will suffer sharp pains; the glare will distress him, and he will be unable to see the realities of which in his former state he had seen the shadows... And if he is compelled to look straight at the light, will he not have a pain in his eyes which will make him turn away? He will require to grow accustomed to the sight of the upper world... Must there not be some art which will effect conversion? 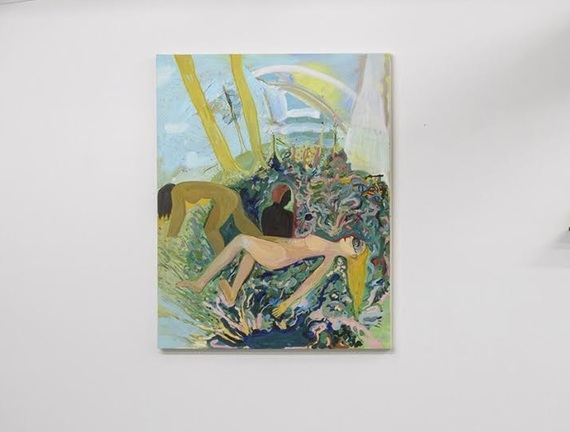 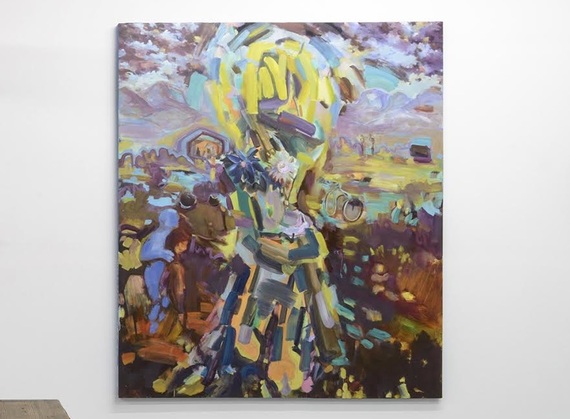 Yes. There is art that can explore this frontier, send feelers deeper into reality and send reconnaissance back to the cave. But is it the art studio which is the cave, a place of limited perspective wherefrom the artist must venture in search of reality, that they may return and attempt to depict what they have seen there? Is the canvas then the true picture of the real? Or is art the shadow puppets and stories we tell ourselves by the fire? Is the art gallery a place to go to learn about truth, and is the artist the one who goes back into the cave to try to free the others -- often at great risk? Art is both as mysterious as shadows and as strange and blinding as daylight. Maybe art is simply what spurs prisoners to attempt their own escapes, to do as the painters have done and go and see for themselves. The nature of reality is not the most uncommon arena for artists to play in, but there is a legible thematic continuity as well as an aesthetic kinship throughout "Within the Cave" linking individual works in a kaleidoscopic but coherent whole that speaks directly to the premise. 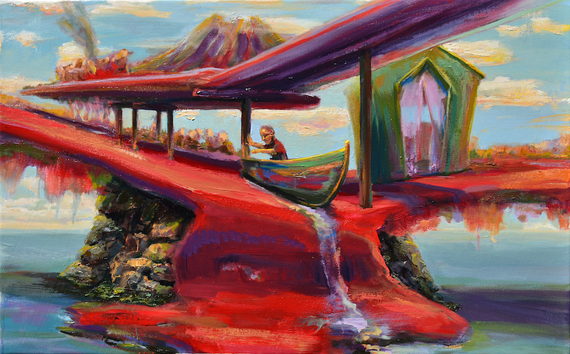 Thomas Whittaker Kidd offers three paintings, the largest of which, "Coming Out of a Red Painting Outside a Cave," is said to have been completed mere days before he got the call and illustrates the parable in an eerily direct articulation. As in all three works, he is actively engaged with several simultaneous approaches to style and composition in the most salient ways; a mannerist creole of exacerbated palettes, surrealist anachronisms, reckless spatial constructs and simultaneous narratives. He demonstrates just enough realist (or at least, let's say, more conventional) technique to set off the strange by contrast, thus making sure the fever dream aesthetics are recognized as deliberate choices. In "Domestication," his addition of a wooden shelf with a pint glass of wheat beer to the installation plays with the real/unreal continuum in a charming, this-is-not-a-glass-of-beer-oh-wait-it-is kind of way, as well as taking apart the confines of pictorial space and sculptural composition for its own sake. 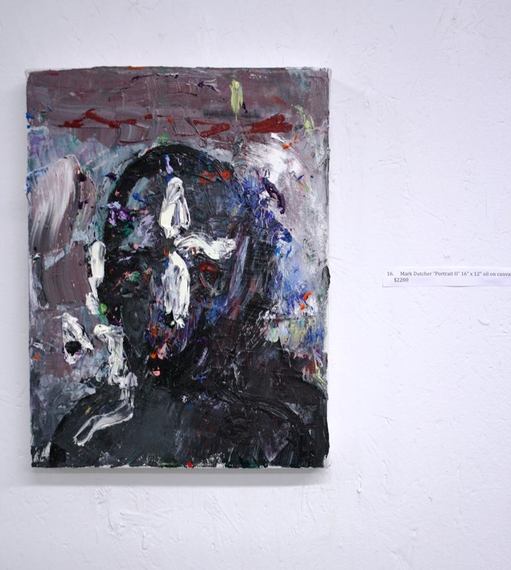 Mark Dutcher shows two molten portraits, one a fugue of ebonies the other a riot of colors. The effect of his self-obscuring impasto is both a meditative poetry and an urgent architectural puzzle. Contemplating the shadows and storms of strokes, the figures appear, resolving ito themselves before one's adjusting eyes. Julia Schwartz has always been one who walks the abstraction/allegory divide, as in her portraits, landscapes and botanicals she introduces structure and rhythm to echo the external world. Upon these structural foundations she then builds emotional and psychological expressions that speak to both what is universal and what is subjective in our perceptions. 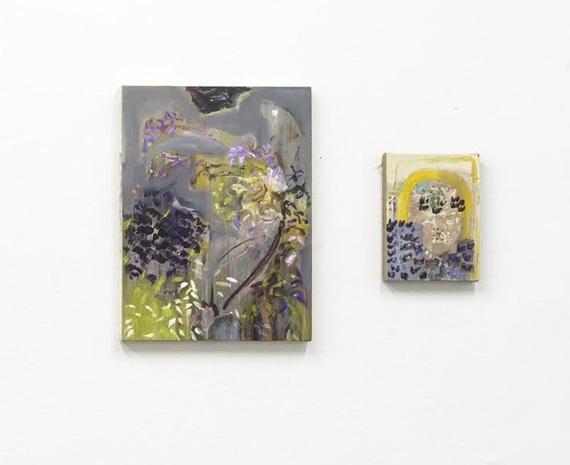 Tom Dunn's dystopian Garden of Eden, like Esmeralda Montes' secret garden, is a florid and ambiguous space,where even the status of the living or dead is unclear. These scenes are certainly grottos of ritual, but the chimerical interplay of body and nature give little in the way of instruction. Kathleen Melian's epic scene evokes the Burning Man festival in its orderly cacophony of dense crowd, desert horizon and central altar. Is that a bicycle in the center right? It speaks to the power of magic -- but also to the lengths folks will go when it comes to expanding their minds. 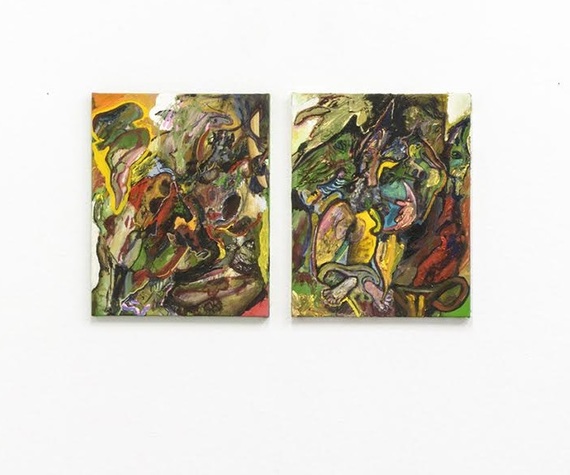 Judith Linhares, especially in "Study for a Cave," wields her palette in a way that demands an answer to the question of what reality is supposed to look like -- and how we settled on those rules in the first place. Her figures and settings are legible, intimate and witty, unnatural without being artificial. Susan Lizotte is accustomed to working in a Medieval allegory mode, where symbolism and multiple meanings are the order of the day. What is especially interesting about "1500," one of her map paintings, is that it introduces yet another way of discussing what is real, what is unknown to us, representing another moment in which we trust the observations of those who have gone out into the world and brought back versions of its truth. 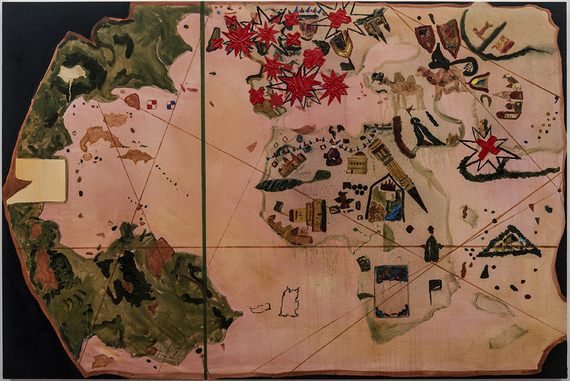 That gives you Saturday the 19th and Saturday the 26th -- but do try for an appointment if you're there another day, as the gallery is inside a building with several artist studios, including Lizotte's, who curated the show and would love to let you in if she's there, which she is a lot.