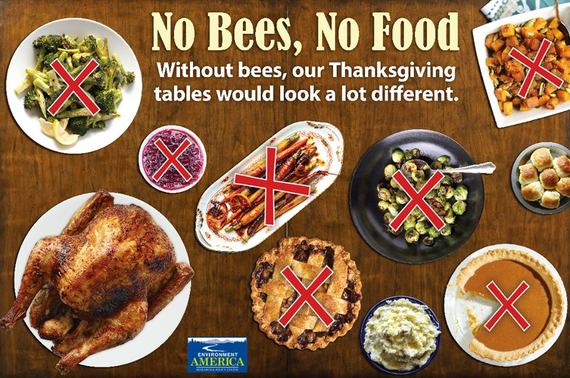 Given how much I love food and family, you won't be surprised to learn that Thanksgiving is one of my favorite holidays. For the past few years, my extended family has been gathering at my aunt's house near the Rhode Island coast, and this year we're expecting a full house that spans the generations -- from my 83-year-old father to my cousin's 3-year-old daughter. My contribution to the already-full Thanksgiving spread is cranberry-ginger chutney, which has quickly become a family favorite. (I even offered to bring dessert instead this year and was rebuffed, so I guess I'll bring both!)

Thanksgiving dinner could get a lot less delicious in the years to come, however, if we don't act to reverse alarming declines in bee populations. That's because one in three bites of the foods we love -- including my chutney and many other seasonal favorites -- depend on bees for pollination.

The U.S. is losing about a third of its bee colonies each year, and that puts many of the foods on the Thanksgiving table at risk, including, winter squash, carrots, brussels sprouts, and pumpkin pie.

Scientists point to the increased use of and exposure to a class of pesticides known as neonics as a major cause of the recent increase in bee deaths, which have brought the U.S. population of the pollinators to historic lows.

Sharing some of the same chemical properties as nicotine, neonics are neurotoxins that can kill bees off directly. They can disorient them and make it harder for them to pollinate plants and get back to their hives.

Numerous lab studies have shown neonics to pose dangers to bees, and last week the journal Nature published the first study to establish a direct causal link between neonic exposure and bees' ability to do their job as pollinators.

The seriousness of the problem, as well as pressure from activists and gardeners, has led major retailers such as Lowes and Home Depot to begin phasing out sales of the chemicals, and some cities across the U.S. are moving to ban the use of neonics as well.

The U.S. Environmental Protection Agency issued a plan last spring to stem the loss of pollinators, but it fell far short on limiting neonic exposure to bees. That's why we're calling on EPA to act quickly to establish a moratorium on the use of the dangerous class of pesticides, and I'll hope you'll join us.

The science is clear, and the time for action is now. We need to save the foods we love all year long and especially our Thanksgiving favorites, including my cranberry-ginger chutney.