Family farms -- managed by a family, and reliant on their labor -- are an important part of rural development. In countries like South Sudan, they play a critical role in providing food security and livelihoods, managing natural resources, and building civil society through farmer organizations.

The theme for this year's World Food Day is "family farming" but there's not a lot to celebrate in South Sudan. It hasn't been a good year for family farming here, and the specter of famine looms large. The conflict that began in South Sudan in December 2013 has disrupted every layer of life of this young nation. According to the UN, 1.4 million South Sudanese have been displaced, and almost half a million people have sought refuge in neighboring countries. The UN is currently hosting more than 99,000 South Sudanese in Protection of Civilian sites at its bases around the country. Many families have been destroyed, their meager farms left barren.

South Sudan should not be food insecure. The country is blessed with vast tracts of arable land, an enviable water source in the Nile River, a perfect climate for growing a wide range of crops, and the human resources to tend them. Prior to the current crisis, more than 90 per cent of the country's estimated 10 million people earned their living from agriculture, mainly through small holder, family owned farms producing staple crops like sorghum, and by herding cattle. 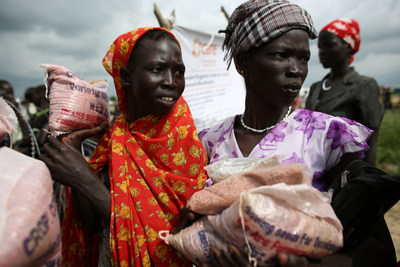 The specter of famine is looming large over South Sudan today. Recent figures from the Integrated Phase Classification (IPC), the key tool for monitoring the status of the food crisis in South Sudan, estimate around 1.5 million people are living in food crisis (Phase 3) and food emergency (Phase 4). The outlook for 2015 remains bleak, particularly with the expectation of renewed fighting in the coming dry season.

In some parts of South Sudan, family farming has continued through the crisis. The tropical climate of the green belt in the country's south, along the border with Uganda, produces fruit, vegetables, and cereals, mainly in smallholder farms owned and run by families. But these farmers can no longer access many of their traditional markets inside the conflict affected areas of the country. Fighting has closed the roads that carried goods, destroyed towns that hosted once vibrant local markets, and displaced the people for whom the markets represented a source of both food and livelihoods.

Food prices have skyrocketed in conflict affected states such as Unity, Upper Nile and Jonglei, where imports from neighboring countries like Kenya, Ethiopia and Sudan are substituting produce traditionally grown by South Sudanese farming families. The result is an increasing dependency on imports that, if sustained, will further diminish family farms in South Sudan.

World Food Day is an important date for farming communities across the globe -- but not in South Sudan. Without its farmers, markets and transport infrastructure, this country remains perilously close to famine.